A Plague on All Your Houses*

Plague Soldier Beetles Chauliognathus lugubris have been capturing the news headlines for the past year or so in Australia. These attractive dark green and orange beetles occur sporadically in large numbers in order to maximise reproductive success. They form dense aggregations on flowering plants and are often seen in gardens and in houses.

I saw them in Canberra in the Botanic Gardens and in private gardens, and in Sydney on the Manly foreshore. Alex Wild noted them from his trip to Australia this time last year and has posted some much better pictures than mine, along with some basic information about the species. 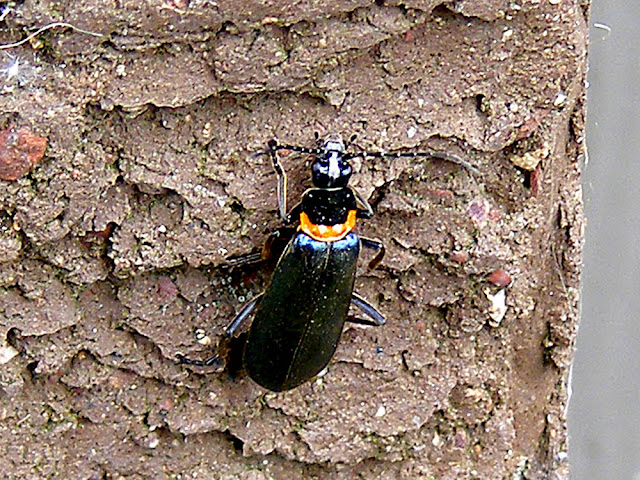 A Plague Soldier Beetle on a Canberra garage wall.

I am quite disturbed by what I read in the comments to his blog post. Most of them are from random Australians who have discovered his blog by accident because they have large numbers of these beetles in their garden and were trying to find information about them. What bothered me especially was the number of these comments that begin with 'I love nature, but...' and go on to say that they are planning to exterminate the beetles immediately.

So -- even when presented with the facts from a clearly reputable authority that a) the beetles are not just harmless but positively beneficial, and b) they will be in plague proportions for only a few days, these people are not prepared to temporarily modify their lifestyle or behaviour in any way (except to remember to purchase an extra can of Mortein at the supermarket). I have to wonder what exactly it is that they understand by the word 'nature' and what they consider to be 'loving' it. 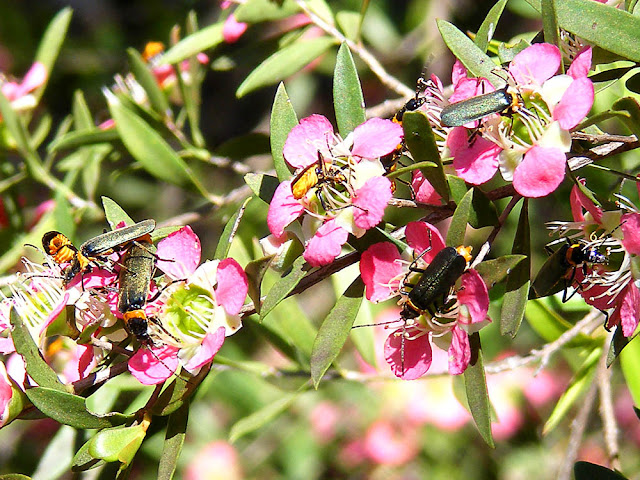 A minor plague on a Teatree Leptospermum sp in the Australian National Botanic Gardens.

I was disquieted to realise that some Australian houses have not just the plug-in devices that deliver a regularly timed dose of synthetic, carcinogenic scent into a room, but some people also have a similar device that sprays a periodic burst of insecticide 24/7. These devices are prominently advertised on television. A decade earlier, people would have had screens on all doors and windows, or simply put up with insects coming indoors. These days, doors and windows are getting bigger and the big screens that would need to go with them are probably not rigid enough to be practical, as well as being seen as unaesthetic. Lights, both indoor and outdoor, proliferate, and exacerbate the problem by attracting the hapless insects. 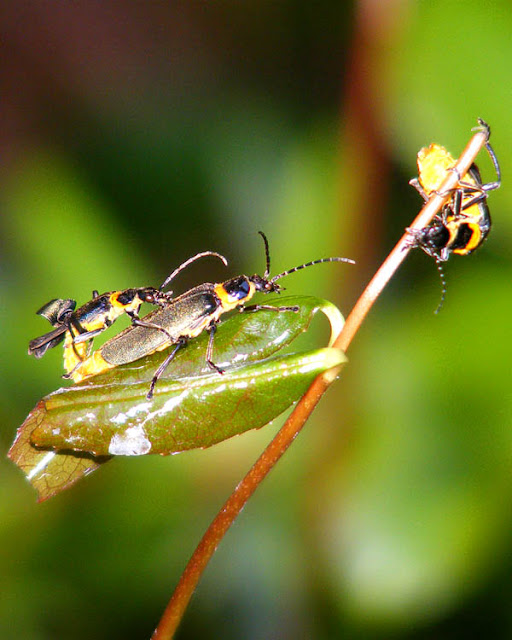 Doing what they do best.

Granted these insecticides are fairly well accepted to be of low toxicity to mammals, but I do wonder how much gets out into the environment from people and pets in contact with residuals on carpet and furniture. After all, mammals are not the only fish** and every time you walk out the door or wash your clothes, some must be transferred to the soil or the water system. It all adds up. I could understand it, and indeed condone it, if the target was specific, such as malaria carrying mosquitoes, but this generalist approach that any insect in numbers or indoors should be a dead insect I find deeply shocking.

*to slightly misquote the Bard, in traditional tabloid manner.
**sorry, that's a feeble taxonomy joke, and you need to know about Willi Hennig to get it.
Posted by Susan at 09:00

We are the fish that walked... that's why most people like to be near water!!

>>attacked me like something from an Alfred Hitchcock…..it was Hell.
>>and leave a yellow secretion on the washing, especially the whites….
>> if only they didnt fly.
>>Billions ! And the year after ? ? ? Give it time the air will be so thick with them we might all be struggling for breath. Haven’t seen any pics of them devouring garden pests either. HAVE YOU?

These read like a tabloid newspaper... [Daily Wail springs readily to mind!]
in fact, if I was a journalist, all I'd have to do is cut and paste these bits for my article on Plague Beetles...
add a few choice vaguely worrying bits of information and my strapline would be seen on the front page...
especially if I'd lifted the pix from yours and Mr. Wild's blog entries... my editor would be well pleased!!

Also I just noticed these:::-

>>George, December 15 - Millions of them here in Greensborough over the past several weeks – covering leaves and stems of most bushes, cars, cracks, crevices and on walls of the house in lrge clumps ……bit “yucky” – but they don’t seem to be doing any damage…..last year it was millions of black centipedes which coil up on touching them – always seems to be some sort of critters appeareing in plague proportions each year…..something in nature “out of whack” ?…..
Reply - Julia Somers, December 16 - Carboryl spray will get rid of them. my whole garden was one great mass.

Reply :- ..something in nature “out of whack” ?….. YES! Stooopid, stooopid b'stards going ber-zerk with cans of Carboryl spray, etc... throwing Nature out of whack!! They'll never get it... creepy crawlies have a bad name and ICI has a large PR dept.

Brother in law, living in Perth, is plagued by insects when doing a BBQ...his solution? Sprays himself with insecticide.....

Tim: you have the scenario exactly -- and Alex Wild gets photos stolen every day.

Lucie: do you think we should apply for IUCN Redlisting for common sense? Not being widely distributed is one of the criteria :-)

Fly: Good old Aerogard -- an Australian icon. And even on the box nature is apparently too real...

yes, it's shooting ourselves and everything else in the foot.