The Price of Things

We had been warned that everything had got very expensive in Australia in the last couple of years, since we were last there. I can't say I noticed it especially, but there were a few things that were significantly more expensive than in France, like diesel (and some, like petrol, which is cheaper).

Whilst restaurant and takeaway meals seem to be around a third dearer in Australia than in France, it was staples like sugar and milk which really astonished us with the price difference between the two countries. 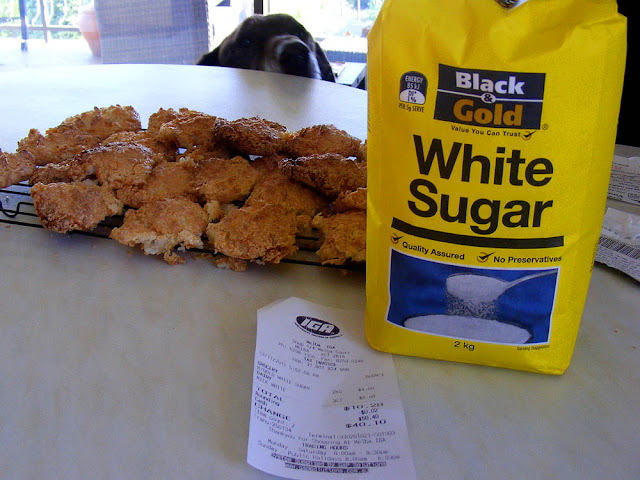 Audi, my sister-in-law Rosie's dog, eyes off the coconut macaroons I have just made with some very expensive Australian sugar.

Both France and Australia are sugar producing countries. In France, sugar beet is widely grown in the north, even after 45% of sugar beet growers have withdrawn from the industry in the last 6 years. The beets are fully refined into sugar in France. The price to growers is set by the European Commission, and they operate under a quota system, but the retail price is not controlled. I pay 89 euro cents a kilo (the equivalent of AUD$1.10). Growers can produce more than their quota and the price for the beets sold outside the quota is not regulated, but these beets cannot go into the production chain for refined sugars. Instead they are sold to the industrial chemical or pharmaceutical processors. Imported cane sugar, especially from less developed countries and former French colonies is equally available, and is offered favourable trade arrangements so it is extremely competitive. Since 2006 France has become a net importer of sugar.

In Australia sugar cane is widely grown in the north east, but it is only processed to the raw sugar stage before being shipped offshore for refining. Sugar is one of Australia's biggest export products. Sugar beet is not grown at all. The 2kg bag purchased in Canberra that you see in the photo above cost me AUD$4.60 (ie $2.30 / kg or the equivalent of €1.85 / kg -- more than twice what I pay in France). Mind you, this does seem to have been particularly expensive sugar -- the same product in the same supermarket chain but in a small country town in Queensland was 90 cents a kilo cheaper.

The pasturised homogenised fresh milk I purchased at the same time cost me $1.90 a litre (€1.53), whereas in France I pay €0.80¢ ($0.99¢) for raw milk direct from the producer (it's up to 10 euro cents dearer in the supermarket, and UHT, not fresh). In Australia, dairy farmers have quotas, are locked in to selling to designated processors (it is illegal to sell raw milk) and are paid between 13 and 18 cents per litre (friends of mine receive 14 cents a litre for their milk). UHT milk is widely available in Australia, but not consumers first choice (only being purchased when shelflife is important). The price is unregulated, and set by the processors, who are effectively controlled by the big supermarkets. At this price, the farmers are not breaking even, and many are handing in their quotas (as my friends plan to do).

France also currently uses a quota system to control the market, although this is due to end in 2015. The price farmers receive is not officially regulated, but there is a regularly reviewed recommended price proposed by representatives from the industry (including the farmers themselves). It is currently around 34 euro cents ($0.42) and processors (such as the giant Danone) stick fairly closely to it when purchasing milk. Even so, producers say that the real cost of production is around 42 euro cents a litre and there was a dramatic protest in Brussels in November while we were away, when dairy farmers from all over the EU came to town and sprayed the European Parliament building (and riot police) with milk.

In both countries, dairy farmers can choose to exceed their quotas, but the extra milk cannot be sold as milk, but only go to make milk products such as powdered milk or the various dairy bulking agents widely used in the food industry. Naturally, the price to the producer is lower for this ex-quota milk. The milk I bought in Australia was not the cheapest. One of the big supermarkets, Coles, notoriously uses milk as a loss leader, and sells it for $1 a litre (80 euro cents, the same as I pay in France). Of course, in this situation, it is not the supermarket or the processors who are bearing the loss, but the dairy farmers. Milk is never used as a loss leader in France -- there would be no point -- French people don't consume enough of the stuff.

More Bakery News:  This time from the horse's mouth -- I spoke to the baker's wife, who runs the shop and she said they simply weren't getting enough custom. It's clearly been too long between the closure of Pichard's bakery and the new baker taking over, and people have decided to stick with the Merles now they've got into the habit of going down the hill. The new bakers are going to continue to bake and open the shop until the end of the month, then it is closed, définitif.
Posted by Susan at 09:00

Bakery Noose.... what do they expect... everyone to suddenly buy from them!
They've only just opened... as new traders... and are not giving any time for a customer base to build!!

When the GP bakery changed hands, it was a "going concern"... and the outgoing boulanger stayed working there for the first month to "introduce" the custom to his successor... "to be sure to be sure"!!

Something tells me that there might be something else going on...
closer, perhaps, to what you surmised in the last mention of these "no hopers!"

I agree, it does seem a rather short trial period within which to assess the viability of the enterprise.

P.S. There were also protests in the UK about milk prices at the farm gate. The feeling is that the large supermarkets are taking too big a cut of the profits.
Supermarkets always have special offers on milk. It has been said that very often it is cheaper to buy milk than bottled water!

Gaynor: I must say I think we are incredibly lucky to be able to buy milk direct the way we do.

What a shame about the bakery...

We can buy raw milk from the lady up the road...a real pleasure after the years of the packet stuff.

I, too, noticed huge price differences in Australia, thought I didn't note them down. I'm looking forward to tracking down places where I can buy free produce direct from the farmers when we live in Blois permanently.
In the meantime, I try to buy bread and fruit and vegetables from the "bio" shop in our street so that it won't close down. Even within the last year, I've seen an enormous increase in custom, but I know it has required a lot of patience on the part of the person who runs it.