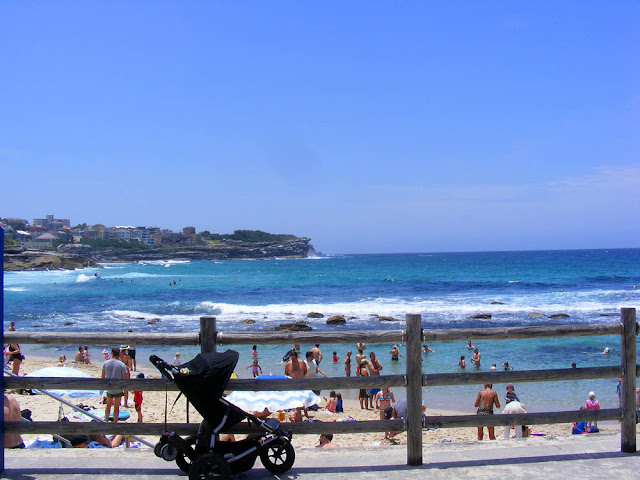 Bronte Beach is where families come. It's got everything -- soft sand, surf, a safe swimming hole for the kids known as the bogey hole (that's the section in front of the rocks and surf, on the right), and an ocean tidal pool for ploughing up and down doing laps (out of shot to the right). There is a lovely park behind the beach with lots of shade and lush lawn, picnic tables and barbecues. The restaurant and takeaway outlet are good. It's where we stopped for lunch on our Eastern Beaches Coastal Walk in December 2012. Parking is apparently a nightmare, but most people travel there on the bus.

----------------------------------------------------------------
Queensland weather update: My father and my friend Margaret have emailed to say that it has largely calmed down where they are. My father described the wind roaring like a jet for two days, but although their town is cut off in all directions, their immediate area has avoided the serious flooding. Today is the first day back at school after the long summer holiday, so there will be considerable disruption to the school programme, and to commerce, with the highways in and out of Brisbane cut (they are allowing some traffic now with police escort). With no damage caused by the wind, Dad is quite happy to have had 4 inches of rain, as they were starting to get a bit dry.

Margaret says there are still 165 000 homes without electricity, but the day is sunny. She had a big pot blow over in her garden and break, so she too got off lightly. Her daughter was in Brisbane and had quite an epic journey home to a town 200km west. The water is still rising in some areas to the west and north-east, but the storm itself has moved down the coast to the south and into New South Wales -- you probably don't want to be at Bronte today, even though that's a long way south of the worst of the weather.
----------------------------------------------------
Meanwhile, here, we are just grey and overcast, with the same predicted for the foreseeable.

How's the weather out there... BBC News [internet] had a mention of tornados.. just to add to the mix.

Tim: the tornadoes were in Bundaberg, on the coast to the north-east of my parents, and way north of Bronte. Bundaberg is being evacuated today because of flooding.

Simon has pointed out to me that we actually stopped for lunch at Clovelly, around the next headland.