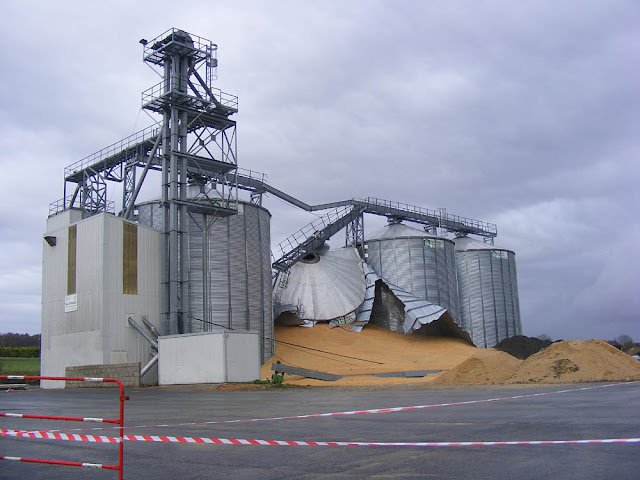 I don't know what happened here. We encountered this ruined silo last Friday at Maillé. Was it the strong winds two days before or did the grain explode? Did the silo just fail? Nothing appeared in the local news until Sunday. The company who run the silos, Durand, are closed for the holidays and nobody seems to know what happened. It is assumed the silo collapsed for some reason Friday evening (so it can't have long happened when we saw it). No explosion was reported and no one was hurt in the incident.

My first reaction was to feel sorry for whoever has lost their grain (not sure whether the farmers or the silo owners will take the brunt here, although it is presumably insured). The price of wheat skyrocketed in 2012. Bakers were paying €176 a tonne in February, but by October it was €260 a tonne. Interestingly, the price of oats is similar, at €250 a tonne. The reddish colour of this spilt grain tells me it is wheat.
Posted by Susan at 09:00

What a sad sight! Do keep us
posted on the final conclusion
about the cause. Wonderful new
header photo...tranquility.

It looks far more impressive this size... and in colour! It was a full silo, so I would think that damper grain than the test sample ended up in that silo and it expanded... the metal looks torn!

And of course, as you have seen in the Sunday paper, the nearest silo to where you were standing was also badly damaged as the other collapsed... nasty!

To my knowledge, 'tis the property of the silo owner once it has been weighed in and offloaded... different farmers will be turning up all the time... so what is in the silo belongs to more than one farmer.

Those silos look very new... it could have been a flaw in the structure possibly... but I doubt it, though... flaws should have been ironed out long ago, given the number of these silos there are!!

Prices up thank to EU regulations on biofuel....

Ultimately, in one way or another, I sugest that we'll be the ones paying ...

Tim: yes, I think it is likely that Durand own the wheat. I also suspect the most likely cause was failure of the silo in high winds.

Fly: I don't think so. Nobody locally seems to be growing crops specifically for biofuel since 2008. I was under the impression the EU very quickly backtracked on favouring biofuels. The local farmers do all sell their sunflower and maize stalks for biofuel though, which strikes me as eminently sensible. The price rises will have much more to do with the annual difference in quantity harvested and the pernicious practice of selling it as futures.

Sheila: I suspect I will never find out. I'm glad you like the new header.

Gaynor: yes, I imagine so.

Susan, these things are meant to withstand high winds... look at the number that are out on the open plains... no I think it burst... the metal looks torn... and on my big monitor there is a distinct set of green patches on the grain... suggests germination or mould growth.

From what I see from farming friends in the U.K. the regulations are about to turn the U.K. into a net importer....and who knows to whom the co op is selling its stuff.

Fly: There is no doubt farming is in a mess all over and the CAP desperately needs reforming. The serious reform process starts this year, and no doubt will end up pleasing no one. The French farming lobby is very powerful, and will force the watering down of many conservation measures in the CAP review. At the moment there is a bias towards broad acre farmers, who are raking it in, at the expense of everyone else. The broad acre farmers have a powerful motivation to fight for the status quo. And they will plant whatever crop gives them the best subsidy, whether it is fuel or food.