A statue of Georges Clemenceau stands at the end of the Petit Palais in Paris, on the Champs-Elysées near Métro Clemenceau. In our time, he has been overshadowed by de Gaulle -- almost literally in the case of these two statues. De Gaulle sashays across the square out in the open in full view. Clemenceau is relegated to the shrubbery on the side of the road.

Clemenceau was an energetic, clear-sighted Republican, determined to pursue policies that were right for France and for the French. He deserves to be remembered more often, as the sort of man you want on your side. 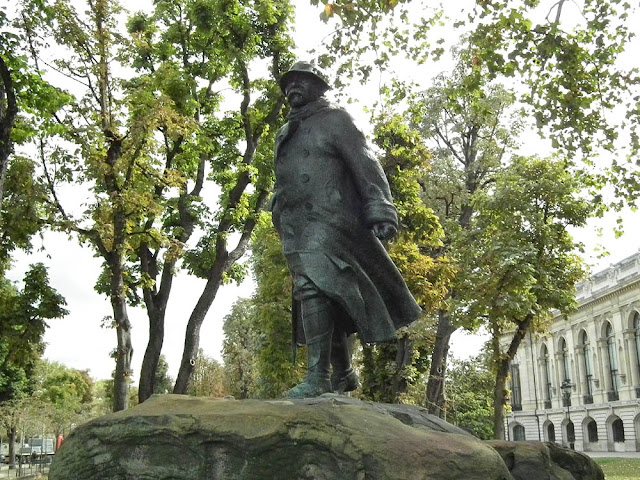 As a young man he spent several years in the United States, just after the American Civil War, effectively exiled there because his political activism in France meant that the authorities had imprisoned him once, and would clearly do so again if he remained in the country.

He was a close friend of Claude Monet, encouraging him to finish the waterlily paintings that now hang in the Orangerie.

Clemenceau was one of the most effective campaigners for Dreyfus when he was falsely accused of espionage. Emile Zola's open letter accusing the government of the time of anti-semitism and false imprisonment was published on the front page of Clemenceau's newspaper. 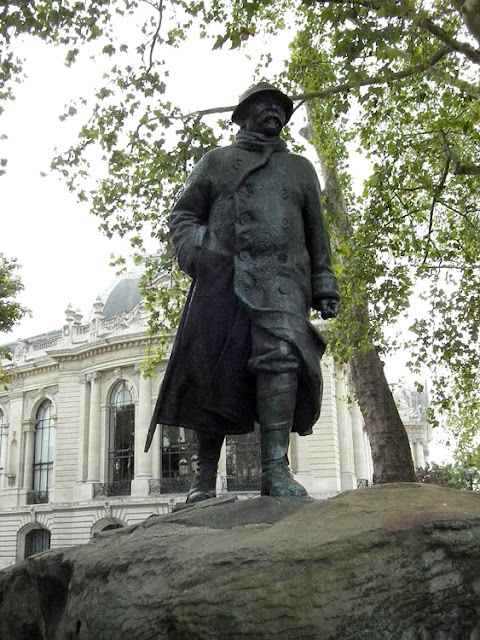 He was vehemently anti-Church and is largely responsible for the fourth tenet of the French Republic (after liberty, equality and fraternity) finally becoming law. Church and state are now strictly separated and France is officially a secular state.

He was Prime Minister of France twice, with his second term beginning in the final year of the First World War. He became very popular with the troops due to his regular visits to the front line and his practical measures to end the war. He was open about the fact that France had been shattered by the war, and pointed out that in the industrial heartland of France, the northern coal and steel producers, would need extensive rebuilding. Germany, on the other hand, was virtually undamaged, and Clemenceau knew that whilst France and her allies had technically won the war, Germany had won economically, and would be the first to recover. Although a great advocate of the idea of a co-operative Europe, he was sceptical about the newly formed League of Nations, commenting that it would only work in a utopian world.

Interesting post... something new... a very interesting character... his statue looks less haughty than De Gaulle's...
and with regard to the truffles insert at the end, you said "Worth going to just for the all pervasive smell of truffles in the air."... you mean the aroma of a student's laundry basket then... Eh?

Tim: is it just me that loves the smell of truffles then?

It can't be... they wouldn't be so valuable!! Perhaps it is a "Marmite Syndrome" event horizon.... let's face it, there really are people who like fruit that smell worse than ess-aitch-one-tea... but taste like custard... and even more who like oysters!!

I wouldn't want him on my side....his action against organised labour in the mining industry and against the vignerons in Languedoc puts him...for me...well with that beast Churchill, while his intemperate demands for reparations, on the pattern of German demands in 1871, led directly to the occupation of the Ruhr and the wave of sympathy for Germany on the international stage which allowed Hitler too much rope.
A good newspaper editor...but a disastrous politician.

Give me le grand Charles any day....

Fly: it's true that his demands for reparations were unrealistic and strident, making enemies and no doubt causing a backlash. I admire le grand Charles too, but he is so pompous I can't resist a few pin pricks here and there.

Quite agree, but it would have to be some pin to get through that hide....

Some generally accepted tips when using truffle :
- High heat kills the flavour, so grate or shave it over dishes as the last step
- let the truffle come up to a decent room temperature. Straight out of the fridge they often taste like soggy wood shavings
- store the truffle with eggs for 2 days - the shells are porous and will absorb the flavour quite well
- our favourite (simple) truffle experience is to buy a slab of French Dauphinoise Brie cheese, cut it in half horizontally and lay shavings of truffle across it - then put the top half back and let it infuse for 3 days - Yum! Hint - cool it down in the fridge before cutting in half, makes it easier. The riper the brie the better.
- a good way to extend the useful life of truffle is to grate it into butter. This should be useable for over a month and it pipcks up the flavour well.
- keep the flavours simple as truffle gets overpowered in complex flavours.
- your mythical 23g from the other year could do 3 meals - 1) truffle the eggs and use a tiny bit grated over the top with scrambled eggs 2) infused into cheese 3) with a pasta or risotto in a cream sauce
- restaurants in Australia are buying truffle at 6 - 8g per person for a meal.
- there is absolutely no difference in taste or quality between a perfect round golf-ball size truffle and one that has many cuts to remove damaged parts. The price varies dramatically though. Just watch for rot which will be spongey.
- truffle oil is invariably artificial and most that have truffles regularly, pooh-pooh it (me too). If you must use the oil, a little is good, more tastes awful (gets a petrochemical taste).
- truffle oil doesn't last forever - best within a few months
- if you are convinced that the oil you have purchased is made with real truffle, use it quickly - the experiments I have seen have gone rancid after a month!
- it's really hard to distinguish between the 'French Black truffle' and the counterfeit Chinese, to the naked eye they are identical.
- truffle is only good fore up to 2 weeks from the time it is harvested - use it quickly.

Everyone I know describes the aroma differently, but the taste can be sublime, or a 'what's the big deal?'. Some people don't get it and maybe never will - trop mal.

Drez: Thanks for your detailed comment and advice. I'd quite like to buy another truffle and try again, but Simon has decided they are a waste of money. A friend sent me a video yesterday about the troubles in the truffle industry -- apparently the spoors of Chinese truffles have been released in Italy. Another invasive alien poised on our doorstep? Mind you, the locals may well profit, as with proper management, Chinese truffles may well be very tasty.