The day before we left for Australia, in November, I turned on the oven and nothing happened -- no light, no fan and definitely no heat. The gas cooktop worked perfectly, so it wasn't the power supply in. We were mystified, but didn't have time to do anything about it before we left. At least it was better than having the back door lock explode the afternoon before we left, which is what happened in 2009. 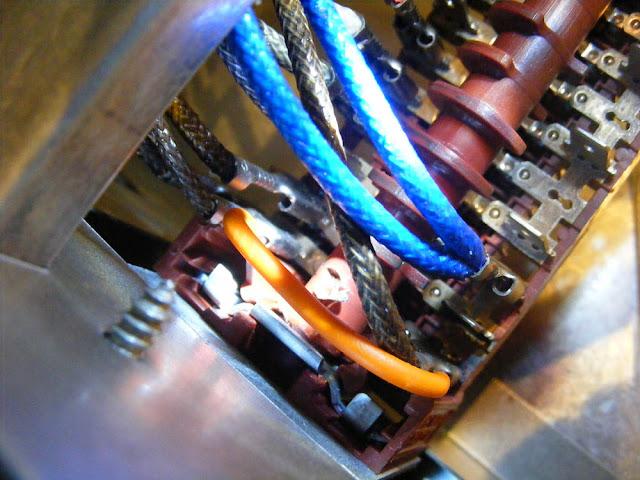 The orange wire is Stéphane's temporary fix just before Christmas.

On our return Simon emailed the retailers in London, who had previously been very helpful. They replied that they were no longer the agents for Bertazzoni and could only pass on to us the contact details for the new London dealer. We got in touch with the new London dealer and they said they couldn't help us as we were in France and gave us the contact details for the French service agent. They were located in a département many kilometres away, so we emailed our friend Chris, who also owns a Bertazzoni, passed on what we had learned and asked his advice. He gave me the service contact email that he had, and checked the papers that came with the range cooker. I'd already checked ours, and neither of us could find any sort of troubleshooting guide, nor any wiring diagrams that might shed some light. In the meantime I'd also emailed Colin, who is an electrical engineer, to see if he could identify what the problem was likely to be. 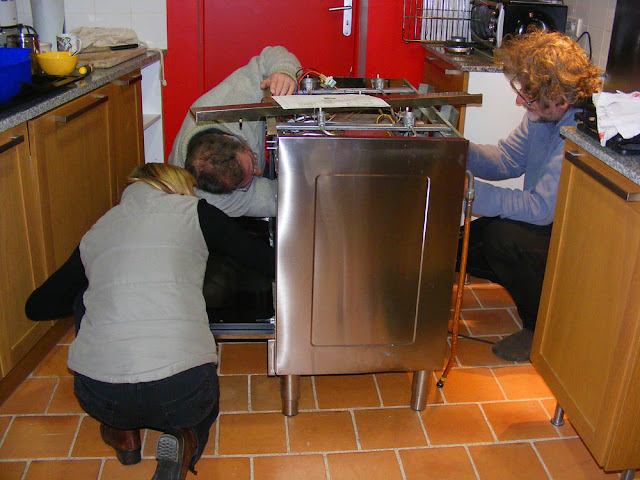 Elizabeth holds a torch while Colin and Simon remove the old thermostat sensors.

I emailed the service address Chris had given me. After about a week they came back to me to tell me that they could only deal with North American clients and gave me a European service email address. I emailed this address and got someone in the service department at Bertazzoni in Italy. He replied promptly, communicated in English and was immediately very helpful. He guessed what the problem was (a faulty oven selector switch) and sent me the relevant wiring diagrams so we could check it out.

I asked Stéphane, if he would come over to look at it, which he very kindly did. Stéphane, amongst his many talents, is a trained electrician. Sure enough, a plastic lug on the mechanical part of the selector switch had melted. It looked like one of the electrical connections was a bit loose, heated up and had caused this. Stéphane effected a neat and clever wiring bridge and we had a temporary fix. 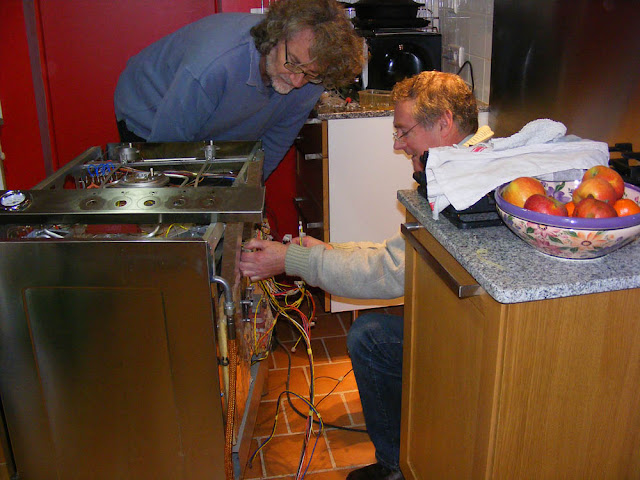 Simon looks on while Colin very competantly puts all the new wires in their right place.

I relayed this information to the nice man at Bertazzoni, who said that he was very happy to post us a replacement part for free, as the range cooker was still (just) under guarantee. What he couldn't do, as we were in France, was arrange a technician to come and do the repair. Would we mind arranging this ourselves? By this time it was Christmas eve. 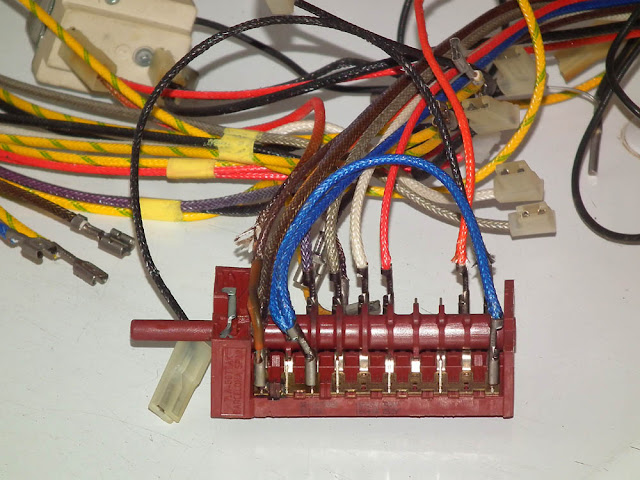 I agreed, and waited for the part to arrive. By 10 January I decided the service department at Bertazzoni's had had enough time to get over Christmas and New Year and emailed them to see where the part was. They apologised, said they'd been very busy and it would be with me by Monday. It was.

Once I had the part I had intended to ask Alex if he could come over and help Simon replace the switch (amongst his many talents he is a trained electrical engineer). However, he was unavailable. I emailed Colin to let him know progress, and he very generously offered to come over and deal with the repair. 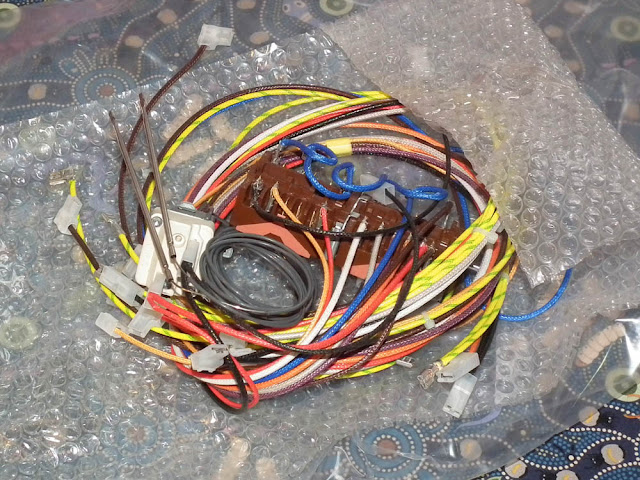 The new switch and wiring loom that arrived in the post from Bertazzoni.

Thus it was that yesterday, Colin and Elizabeth arrived, bringing the first snow of the winter with them. The old switch, thermostat and wiring were pulled out and the new gubbins put in. It seems likely that Big Berta was the victim of a known problem with these range cookers, as the new part had been modified to be more robust. Colin took the view that since we had been sent the whole kit and kaboodle, we would be best off replacing the whole lot and not just the selector switch. I was most impressed by Colin's grasp of how it all worked and where everything should go. With hardly any bad language, he and Simon had the top off, the switch in place and the coloured spaghetti all connected in the right places. It worked first time too! We really appreciate his time and expertise. 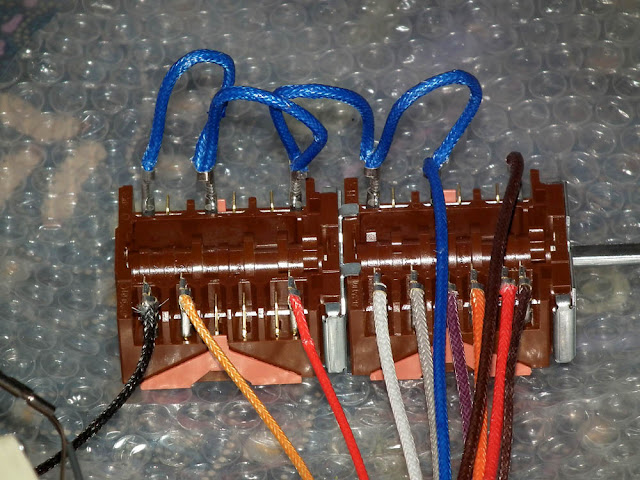 A close up of the new switch.

In return I cooked a fat and gluten free lunch for everyone, which I thought was going to be a bit challenging, but turned out to be relatively easy (minestrone with no lardons, homemade veggie stock and gluten free pasta left over from John's visit in May; warm winter fruit salad and rice cream pudding made with skim milk, in case you need to do the same one day).
Posted by Susan at 09:00

Email ThisBlogThis!Share to TwitterShare to FacebookShare to Pinterest
Labels: electricity, Food and Drink, Kitchen, Our house in Preuilly

Well done you and Colin... what an excercise... both for the mind and the engineer...
it is definately the same switch that was on our De Longhi... and in the same place!!
Only ours was much more burnt than yours... and we only got a replacement that was identical... your replacement looks very different...
but the bit of heatproof sheet that the De Longhi service engineer put in place covered the whole assembly. You can see how scorched Stéphane's bridge has become in the short while since it was put in there.
Oh well... at least you are now cooking on gas...

A happy ending - what a relief!
One somehow expects the whole thing to take months and months and get nowhere in France!

Well done to all concerned for expertise and perseverance.

Another occasion when it's a matter of 'who you know and what he knows'.

I've just noticed that I was one cuppa short on the last line... must be this grey rain... where's this forecast snow?

Tim: Colin seemed to think it was normal and fine.

Jean: I don't think this was a very typical situation. We've been in the situation where a company wouldn't refund money for a purchase that they never delivered and that took a letter threatening legal action, but when our television when bung, that was a very quick replacement of the goods.

Gaynor: I've always been amused that using 'the old boys network' is considered unacceptable these days, but we are all encouraged to network -- what exactly is the network for if not to use in situations where you know someone who can step in?

Only to happy to help someone out especially when it is Electrical... You have to keep you hand in somehow.

Those men are treasures....one look at all those wires and I'd be having the habdabs.

Coloured spaghetti LOL! It is exactly what it looks like to me!
Oh and hurrah for the network says I! :-)

It is soup weather: made bisque des crevettes with homemade shellfish stock last weekend and then cream of celery yesterday.

N&A: yep, I think I'll be making more soup v. soon. BTW, I think spaghetti is the proper term for this sort of wiring.