Today is the 10th anniversary of devastating bushfires that burnt out much of the wonderful National Parks and Nature Reserves that surround the Australian capital, Canberra, destroying buildings at the Mt Stromlo Observatory, killing many wild animals and birds including those at the Tidbinbilla Research Station, and finally, entered the suburbs themselves, destroying 500 houses and killing 4 people. An appalling event that we watched with increasing horror, live on the internet at home in London. 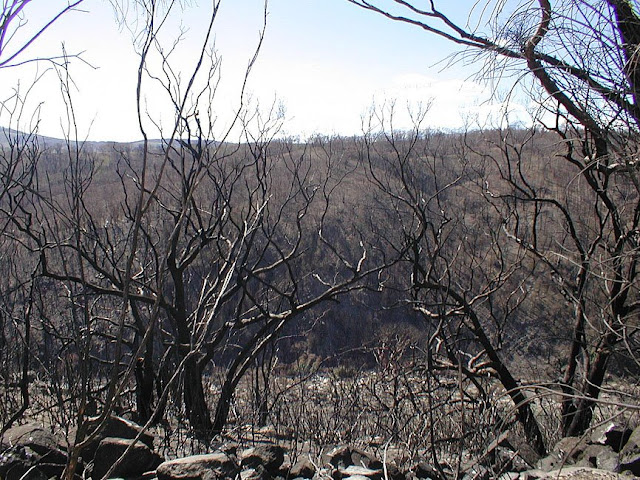 A photo I took in Namadgi NP, March 2003 -- everything you see is burnt, down to a depth of 1m into the ground.

The fires were extraordinarily ferocious, consuming everything in their path and moving at great speed. I was in Canberra 6 weeks after the event and saw for myself the blackened earth in Namadgi NP and the ruined houses in Duffy. 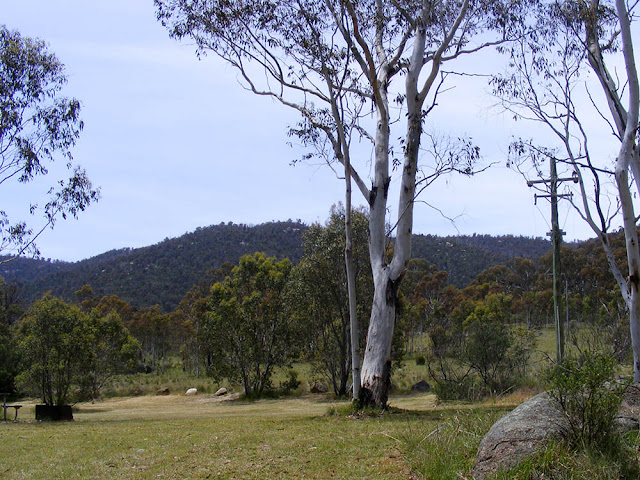 Namadgi NP in November 2012 -- you might never notice the fire damage...

Nowadays, the casual or uninformed visitor wouldn't notice the traces still visible to those who remember. In the mountain forests of Brindabella and Namadgi the trees bear the scars, but new growth almost entirely obscures the dead trees now. 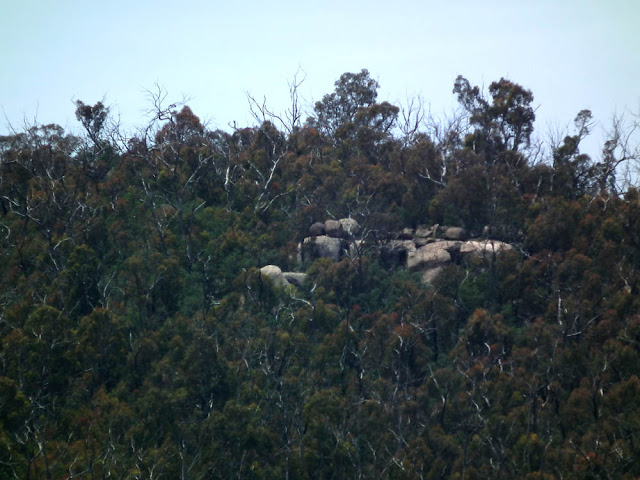 ...but look more closely at the hilltop in the background.

The fires were a tremendous shock to Canberrans, who never expected them to breach the city boundaries or to destroy so much of the surrounding forestry areas. Simultaneously, terrible fires were burning in Victoria, which would not be extinguished until early March. After the smoke cleared and firemen at last went home, a debate started about how bushfires and the bush near urbanised areas should be managed. Something had to be done, because quite apart from the loss of life and property, fires were beginning to be a significant pollution problem, contaminating water resources and by 2007, releasing 30% more carbon dioxide into the atmosphere than coal fired electricity plants, industry and car exhausts put together. 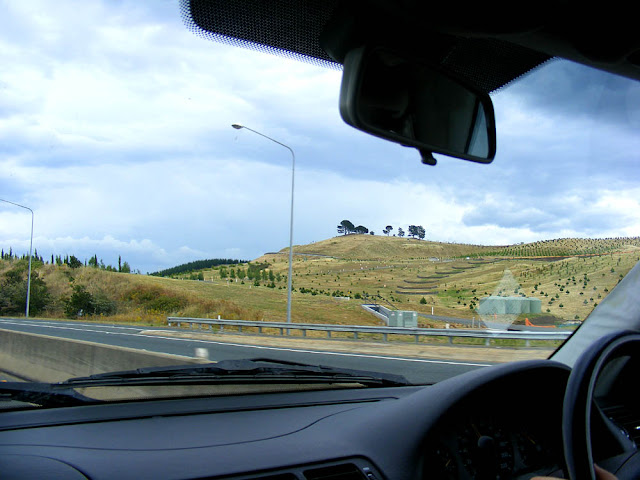 The new National Arboretum, replacing a commercial pine monoculture that was destroyed in 2003.

The discussions centred on the need to clear undergrowth, which provided fuel for the fires. For years the government policy had been to make fire breaks by grading vegetation clear areas and doing controlled burns on a very limited scale. This was seen as good conservation practice, leaving habitat undisturbed. Now those who argued that much more controlled burning was needed started to be taken more seriously in public. They drew heavily on traditional Aboriginal practices of 'cleansing' the land with fire and won a lot of support. 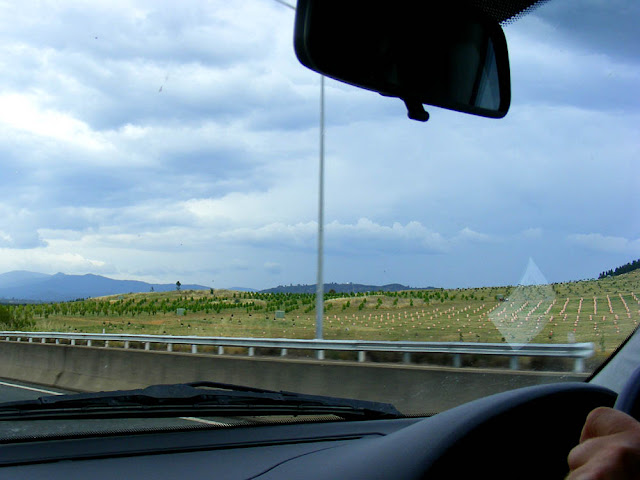 The Arboretum goes on and on...

However, my reading makes me worry that the ideas of those who would manage the forests in traditional ways have been dumbed down. Policies have been established that are so formulaic you can see immediately they are not going to succeed. There is no allowance for seasonal differences from year to year and too much pandering to selfish modern landuse practices, leading to a blanket, simplistic requirement for a 10% annual 'controlled' burn. It seems very likely that the same convenient pieces of land will be burnt year after year, to fit in with some works department agenda, and often with a hubristic lack of regard for current weather conditions. It will also give the green light to concerned but inexperienced private citizens to conduct burn-offs of their own. These fires are frequently inadequately supervised, and not checked thoroughly to ensure they are totally extinguished ie cold, including underground tree roots.

Although there was an enquiry after these fires highlighting the tinder load issue as well as the flaws in the 'stay or go' policy ('hoping people will do something is not a policy') whereby evacuation was not enforced and people could make up their own mind whether they evacuated or whether they stayed to fight the fire, it seems that the lessons were not entirely learnt. 2009 saw utterly horrendeous fires in Victoria, and now we've just had southern Tasmania up in flames again, along with bits of New South Wales. Communications and warning systems continue to fail and there is too much reliance on fire trucks, which can't get into the wilderness. Encouraging people to have a fire survival plan, with an agreed set of actions once the warnings go out has helped, but government needs to focus on issues such as electricity line maintenance and how to achieve the delicate balance between high quality wilderness habitat next to safe urban human habitat. 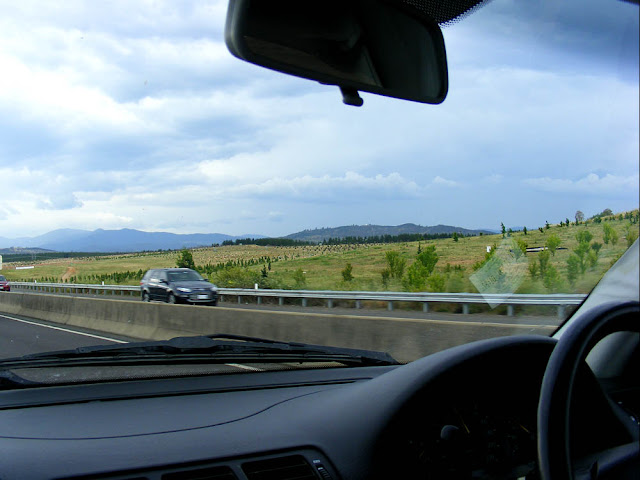 ...covering many hectares, and already a Canberra icon.

On a happier note the one very positive thing that has come out of the Canberra fire is the National Arboretum. Thousands of trees of many species, both native and exotic, are being planted on the hillsides where there was once a pine plantation. Canberrans have taken this project to their hearts and support it unreservedly. It symbolises regeneration, renewal and looking forward to a future full of hope for them. It's not yet open to the public, but special events are periodically held on the site, including what was clearly a very popular annual concert, Voices in the Forest.

To read a very moving account of the fires written by someone who was present and actively involved in the aftermath, go to the blog post for today on Talking Naturally, written by Ian Fraser.

Bakery Update: Bad news again I'm afraid. The new bakers is fermé fermé  according to one of my old ladies. No one knows why, although she hinted she might know or have guessed -- it could be plein de choses, apparently. My guess is that the bakery equipment is not up to scratch and there has been a disagreement with the landlord. It is very curious, as only a week ago, Bertu (the mayor, Monsieur Bertucelli) was clearly delighted to welcome the new baker to town at his New Year ceremony and there was no hint it might be a trial period or anything.
Posted by Susan at 09:00

Thank you so much for the fascinating info on australian fires. We have the same problem here in Southern California. And because of budget cuts, our chaparral is not as well as taken care of as it used to.

Someone from Canberra has emailed me to say that not everyone wholeheartedly supports the Arboretum. There are questions as to why exotics have been planted and why it isn't all native trees. There is a feeling that the exotics will struggle in the next drought. I must admit I had similar questions when I saw the Arboretum, but the level of support for the project in the media and amongst everyone I spoke to on our visit was striking, so I didn't want to sound a discordant note.