A couple of months ago, Martine contacted Susan to say she would be in the Loire Valley with some friends and would like somehow to meet some of the people she has become friends with through writing and reading blogs.

We had an afternoon of better weather than was forecast, more food than you could jump over, and many hours of the sort of conversation you get when interesting (and interested) people from ten different countries meet in a back garden. 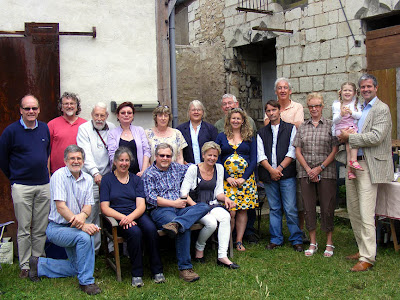 If you read any of these blogs, I think you can expect to see photos of food: Chez Charnizay, Wishing I Were in France, WCS: Another American in France, Living the Life in Saint-Aignan, La Petite Presse and My Life in the Charente. 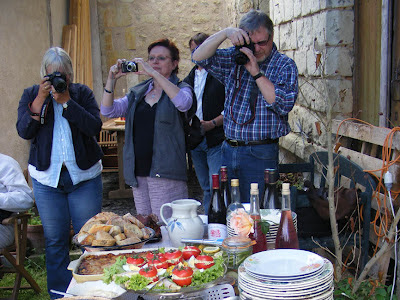 Everyone bought amazing food, interesting wine, their English language skills and cameras. As you would expect from bloggers.

And a good time was had by all! Thanks for hosting us.

Agree with Walt says better than I could have.

Nice to hear you all had a good time - and the weather was kind too!

This photo seems to be missing something - oh yes, I know now: US!!! Looks like a fantastice day.

Brilliant party, and you were absolutely right when you used the words 'interesting and interested people'.

Thanks for inviting us. We had a fantastic time. Susan and Simon are perfect party hosts - is there another business in there somewhere?

Susan and Simon, that photo of the photo-taking is priceless :) What a great time you all must have had!

What a great party; thanks Susan and Simon so much for all the trouble you went to, and especially for inviting us to stay overnight. That made our day yesterday much more relaxing in that we didn't have a long drive home immediately after the festivities.
We managed to see Angles-sur-l'Aglin, Chauvigny and Saint-Savin on the way home; all great sightseeing tips and a fantastic change of scenery for us.

We loved meeting everyone and what an interesting group of people we bloggers were!!. Thank you so very much. Nigel and Diane

It looks like you all had a great time - I bet Martine was thrilled.

We were delighted to host and so pleased everyone had a great time - us included.

Judy: one of the hazards of food blogging - never getting a hot meal because it has to be photographed first...

Jean: She was, and she and Mats and Vera really enjoyed getting together with you and Nick the day before.

Diane: our pleasure, any time.

What a lovely idea! Just goes to show what a great bunch of folk bloggers are! Glad it went so well.

Thanks for a great time, hope to see you all again. The Loire Valley has now a place in our hearts. We will be back.... Love Vera and Mats

Jean: Sorry you could not join us, hope you got home ok, Vera

Vera: We really enjoyed meeting you and Mats, so I hope you will indeed stay in contact.

L&S: shame you missed it all, but maybe Sue needs to think about rescheduling her birthday?

Thank you for hosting this excellent party!!! As Jean writes, I was really thrilled meeting all these blog friends and seeing everybody having a wonderful time. Merci encore! Martine