By far the most famous of the French tapestry weaving workshops is Gobelins. Originally, in the mid 15th century, Gobelins was not a weaving manufacturer but a family of textile dyers who set up an establishment in what is now the 13th arrondissement of Paris. In the early 17th century Henri IV moved a team of Flemish tapestry weavers in and 1662 Jean-Baptiste Colbert bought the place on behalf of his royal master Louis XIV.

Colbert transformed the workshops into a multidisciplined affair, housing every possible trade required for making ornate highly decorated furniture for royal residences and gifts. After 30 years the money ran out and after a brief closure the factory reverted to just making tapestries. 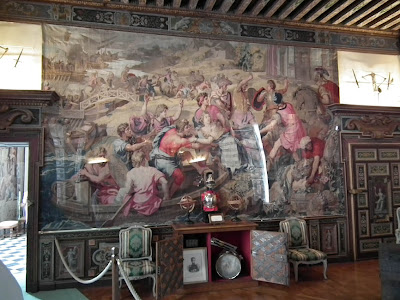 In effect the factory still exists, as the state run Mobiliers national (part of the Manufacture nationale network) which showcases the French heritage of decorative arts and trades, provides training for weavers and conservators and perhaps most important of all, is one of the few places you can send a tapestry for cleaning and repair.

The Gobelins tapestry above hangs in the Arms Room at Cheverny and depicts the kidnapping of Helen by Paris. Apparently it has never been restored, so it is certainly a remarkable survival and a credit to the diligent collections care the family and staff undertake. Normally tapestries require considerable conservation work to ensure that aged fibres weakened by exposure to light do not simply tear themselves apart due to the tapestry's own weight.

Although this tapestry shows the typical overall yellowing that is the visible clue that the fibres are degrading, the dye colours have proved quite robust. All the dyes used in tapestries up until the mid 19th century are made from naturally occuring substances - mostly plant based, like indigo, but occasionally animal based, such as coccinelle. These dyes vary considerably in their fastness, and their effect on the wool threads they colour. The various mordants used to fix the dye can affect the lifespan of the weft differently too. Some colours stay bright and the fibre strong, others fade or rot very quickly.

Gobelins perfected hundreds of dyes, but one of the reasons tapestries often have a blue caste is because there was no good natural leaf or grass green. Bright greens were produced by overdying blue and yellow. The yellow vegetable dyes were not particularly lightfast, and soon faded. The blue however, was indigo, and very persistant. The more foliage in a tapestry, the bluer it looks today.

Because of the 'stop - start' way tapestries are woven each colour forms a discrete unit. The slits between the colours are hand stitched together, but if this stitching fails the tapestry develops 'fault lines'. Tapestries are tremendously heavy and any weak areas tend to just rip apart because of the stresses. Workshops like the modern Gobelins have the facilities to take these huge objects and consolidate the fragile textiles so they can be enjoyed on chateaux walls for another generation.

Fascinating, Susan. Must be
interesting to watch one of
these being repaired.

so it's true, nothing gold can stay, even in dyes.