No one really knows where macarons (macaroons) come from or how they were first created, but the traditional rustic style (as opposed to the refined, colourful and fashionable choice in patisseries all over France) is one of the most delicious secrets of the Poitou region, just to our south and west. They are crunchy on the outside and squidgy on the inside.

The word macaron first appeared in a book by Rabelais, written between 1548 and 1552. It may come from the Italian ammaccare 'to crush' - after the ground almonds used to make them. According to some historians these little cakes arrived in France in 1533 from Italy with Catherine de Medici when she arrived to marry Henri II. The queen's pastry cooks brought with them the secrets of working with sugar and almonds to make marzipan, and also the more humble macaroon. Other culinary historians say that macarons were already being made in French convents of the Middle Ages. Their accounts vary too on how the macaron spread throughout France. Some say that pilgrims on the route to Santiago de Compostella gave macarons as a thank you gift to their hosts at each staging point. Others say that the king loved them (and there is documentary evidence for this) and so pastry cooks throughout the land made sure to learn how to make them when he visited.

Simon's macaroons are in the rustic tradition. 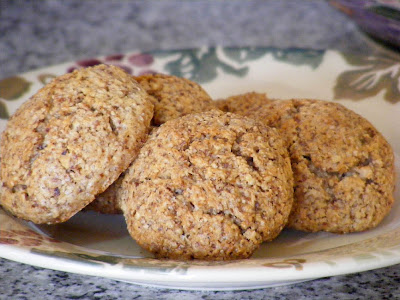 Whatever the truth of the matter, the result is that macarons are now ubiquitious in the Hexagon. They rise in popularity again in Nancy and in Bordeaux, where two nuns made them famous after the Revolution. Whether squidgy or dry and meringuey the 'traditional' ones are all different. Those from Montmorillon in the Vienne belong to the squidgy school. At the end of the 19th century two sisters in Montmorillon were the last in a long line of macaron makers. Having no descendents themselves they gave their recipe to their kitchen maid, who carried on making the macarons. Her daughter married and in 1920 she and her husband took over the business. It is now run by their grandson, who has expanded to several shops and in 2003 set up the Musée de l'Amande et du macaron. It seems that these days, France doesn't produce sufficient almonds to supply the ever burgeoning macaron market, and they are now made with Spanish almonds.

Hello Susan:
And we suspect that you will also know where the very best ones are to be found in Paris. We dare not give the name as it is already too popular!

Simon's rustic macaroons would be my choice. They look scrumptious.

The Larousse Gastronomique (1938) says almonds come mostly from Spain and Italy. It also mentions "bitter almonds" (amandes amères) as opposed to amandes douces ("sweet" almonds). It's not clear to me what the difference is. Near Tours, Cormery is also famous for it's macarons.

BTW, meant to say that we visited the macaron museum last summer and it was great fun.

J&L: If you mean Ladurée I've only heard about it because tourists rave about it on travel forums. I've never been there. It's owned by the same group that owns Paul's, so whilst I'm sure they are good, I bet they aren't the best.

Ken: Oops - the Régal article mentioned that macarons were traditionally made from a mixture of bitter and sweet almonds, but I failed to mention it in the blog. Also forgot to mention Cormery.

Jean: Thanks for the feedback on the museum.

I think Simon's macaroons are absolutely delicious too!

Interesting history Susan... and a timely re-link to Simon's 'Roonies as I want to make some! Couldn't find the recipe but have now saved the recétte on this machine [being Pauline's and closer to the kitchen.]
Tim

Intriguing history, and thanks for the macaroons recipe. Always happy to find another gluten-free baked item.

Emm: wouldn't it be a bummer to be a coeliac who didn't like almonds?

We bought the Cormery macarons as a gift, but after a day I broke down and ate them myself (with a little help), and we were not impressed. I'm glad we didn't give them as a special present.

Carolyn: That's interesting. I've never bought them myself because I think they are rather expensive (more than a euro each). I've had samples at the market and thought they were nice though.