Last year I was lucky enough to photograph a female Large Blue Maculinea arion (l'Azuré du serpolet in French) egg laying on the Wild Oregano Origanum vulgare in the field opposite our orchard.

This species is one of a number of butterflies referred to by ecologists as 'Grassland Indicator Species'. Their abundance helps scientists determine the ecological health of natural grasslands. The bad news is that their population declined by 50% between 1990 and 2007. The good(ish) news is that the warning bells were heeded, at least for this species, and the situation may have been improved (although the longterm trend is still uncertain). 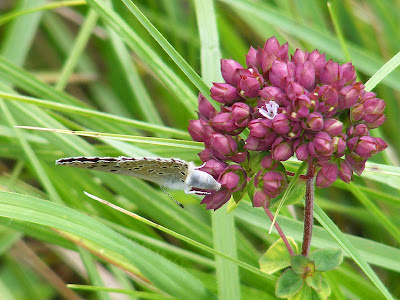 Your first impression when you encounter this species in the field is that it is an unusually large blue butterfly. With a wing length of 16-22mm compared to the 12-18mm of the Common Blue it is noticeably bigger than any of the other blues likely to be flying. You will also notice that it isn't a stunning almost irridescent sky blue like the male Common or Adonis Blues. It's a rather dull blue infused with grey on the upperside and a lovely dove grey on the underside, with bold black spots. When you look closer you will observe that there is no trace of orange on the underside (which eliminates many species) but it usually has a blue basal flush. There is a quite distinct 'ladder' pattern of black and white in the fringes, but only visible on the underside. The black marginal and sub-marginal spots in particular are much more clearly defined and complete than in other Maculinea spp. Males and females look the same (unlike many species of blues, where the males are blue but the females brown).

Feeding on bramble blossom in June. 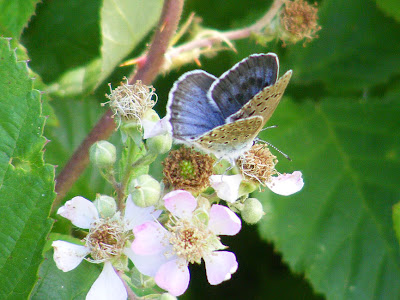 The species can be found from Western Europe to Japan. In France it can be quite abundant locally, but is in regression. The adults fly from June to August and eggs are laid on the buds of wild thymes (Thymus pulegioides, T. praecox) or Wild Oregano Origanum vulgare. Once they hatch, the caterpillars spend a few weeks on the host plant, then engineer their adoption by an ant Myrmica sabuleti who takes the caterpillar down into the anthill, where it promptly eats the ant larvae before hibernating. They inhabit poor grassland, grassy fallow and wasteland and flowery margins that have been invaded by oregano and woodland edges and clearings.

The blue and grey upper. 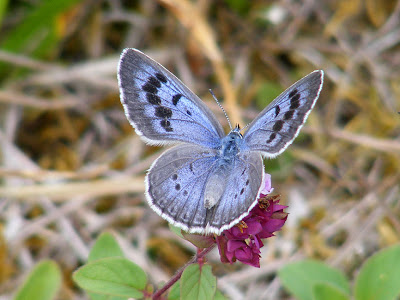 The Large Blue became extinct in the Netherlands around 1964 and in England in 1979. The story of the species in England since the middle of the 19th century is quite well known and shows that the extinction was the result of habitat loss and the increasing isolation of populations. It was successfully reintroduced in a programme beginning in 1983, involving considerable research to understand its very particular lifecycle and ecological requirements. 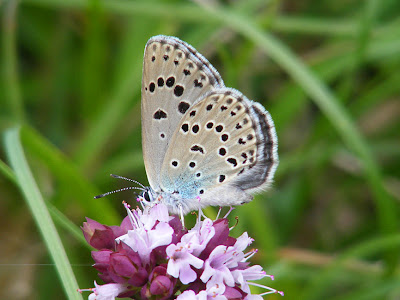 Studies in England and Germany have shown that traditional sheep grazing provides a significant tool in the conservation of habitats for Large Blues using thyme as a host plant. The requirements for the southern populations, who lay on oregano, seem to be different, with stronger colonies populating lightly maintained sites with quite dense vegetation.

Checking out the oregano buds prior to egg laying. 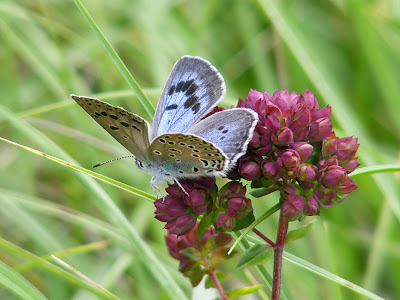 Our Large Blues are obviously of the roughty-toughty southern type, happy to lay on the oregano sprawling through natural grassland. Sadly, the day after I took the photos, the field was mowed to prepare the overflow carpark for the Comice Agricole. Even more distressingly, the field has now been completely destroyed as Large Blue habitat - yet another piece of natural grassland to go under the plough.

Hello Susan:
This is a most interesting and informative post for us as, as far as we can recall, we have never before seen a Large Blue. What we find depressing is the loss of habitat for so much wildlife, and in particular in England, over the past fifty or so years.

Interesting post Susan don't think I have ever seen this butterfly but I may not have recognised it if I had. I will look more closely if the weather changes and I see butterflies around. It is sad that the local environment is vanishing, if only you had known you may have been able to have saved the eggs. Diane

J&L: Well, Hungary is next. Since their entrance into the EU, farming methods are intensifying rapidly, and it is that which leads to the most habitat destruction.

Diane: saving the eggs would have been no good because I wouldn't have had the ant hosts.

What wonderful photos. I recall
that you have the oregano in your
orchard. Might it be possible to
obtain the ants somehow? Weren't
they reintroduced to England
from Swedish stock? Do find
this one of nature's most
amazing stories.

By the way, didn't have a chance
to read yesterday's blog unril
this a.m. Your garden looks
great. Having gardened in New
England, I know how touch-and-go
it can be. Always grateful for
peas...they would grow in the
snow once underway.

Sheila: I don't think the ants were reintroduced, just the butterflies. In fact the orchard doesn't have any oregano, but I am thinking of introducing it. The orchard has a lot of fescue, so is a real pelouse, with many wildflower species growing amongst the grass. The destroyed field was much ranker coarser grass invaded by oregano and bedstraw - just the sort of thing Large Blues like, and I'm not sure I could replicate it in the orchard.

The peas are thriving in this weather - previous years have been too hot, so you do win some and lose some, for sure.