The Claise Valley taken from La Forge (between Preuilly-sur-Claise
and Chaumussay) and looking upstream (east). 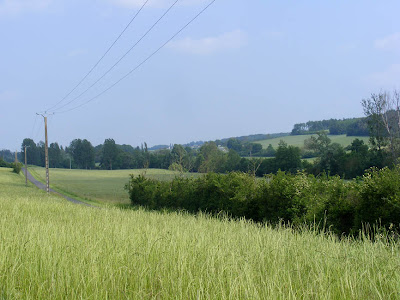 L'Association de Botanique et de Mycologie de Sainte-Maure-de-Touraine held an outing to see the orchids of the Chaumussay area on Saturday 26 May. It was while my sister and brother-in-law were here, so we all went along. We saw 20 species of orchids and 2 hybrids in the Claise Valley within a few kilometres of Chaumussay, on 6 sites. Chaumussay is the next village downstream from Preuilly. There were a number of other plants of botanical interest such as Rough Marsh Mallow Alcaea hirsuta, Carduncellus mitissimus and Field Cow Wheat Melampyrum arvense.

Looking at a Military Orchid on a roadside bank. 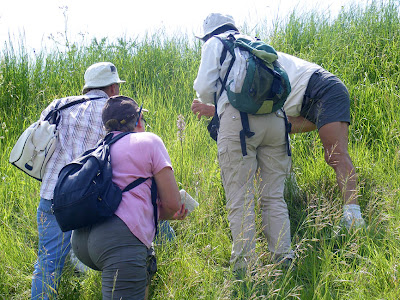 It was very hot, but up until recently the weather has been cool and rainy, so the orchids are generally looking more robust this year and flowering at a more normal time. At each site Marc Fleury, the outing leader and a retired botany teacher, gave a mini lecture about each species as we came upon them.

A very rare hyperchromatic hybrid of Man
and Monkey Orchid. 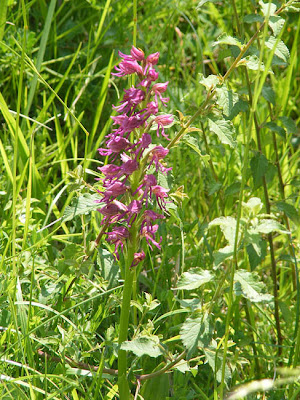 The roots which give the Birds Nest Orchid its name. 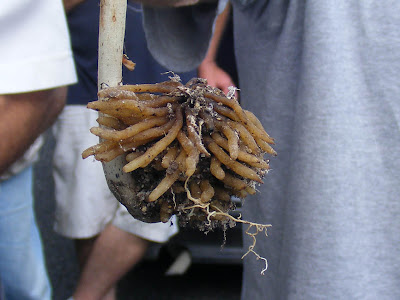 My brother-in-law John was shocked by how much people handled the orchids on the outing. This is a complete no-no in Australia since it has been discovered that this leads to the plant being more attractive to herbivores. Likewise, uprooting a plant specimen, even on a serious botanical outing like this no longer considered best practice, but several of the botanists in the local club are elderly and distinctly old school. It is not illegal if the species does not have protected status, but the younger botanists in the group would not consider it appropriate to dig up plants unless they were being taken back to the lab for some officially sanctioned research purpose that would ultimately be published. Nevertheless, there is an expectation in France that even small clubs like ours take their pedagogical responsibilities seriously, and the octagenarians in the group feel it is important that we learn as much as possible about the species in the field and first hand. In fact the specimen above was destined for the club's annual display at the Sainte-Maure-de-Touraine cheese festival. 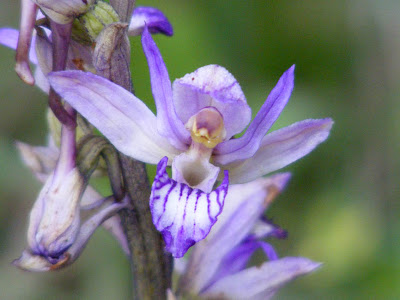 Both the Birds Nest and the Violet Limodore are parasitic, using fungal mycorrhiza to tap into the roots of nearby plants. The Violet Limodores are always found in the company of oaks, and don't open their flowers unless it is hot.

Orchids we saw in flower:

* indicates the species is protected, meaning it is illegal to disturb the plant by picking the flowers, digging it up or otherwise damaging or destroying it. This includes landowners and people with permission from the landowner (the only exception is farmers going about their normal farming activities). Protected plants can not be harvested commercially or offered for sale.
Posted by Susan at 09:00

The violet limodore is lovely.
I looked at photos of several
of the specimens you saw. Your
Loire Valley Nature site is so
impressive. Whenever I've
read your entries, I'm in awe
of how much time you must have
spent developing it.

The Violet Limodore is beautiful; reminds me of what I know as Lady Slipper, which is probably a distant cousin.

Sheila: LVN is my winter project, and a good way for me to consolidate info.

I love the Violet Limodores, but they are often very unobliging about opening up, and just look like purple asparagus.

I'd be pretty shocked if the guide uprooted one. We went on a herbalist walk once and she didn't know about the life of the plant, only how to harvest for human purpose, nothing of pollinators or history, names of what she took the blossom off, idly. ee.

Lady's Slipper that I remember from childhood was pale pink. The yellow and brown did occur, but rarely. Maybe different kinds on different continents?