The term 'flying flock' was coined to describe the use of a small peripatetic herd of sheep that are used as a nature conservation tool. They are 'flown in' for a few weeks to graze a site, then moved on to the next site. Most European nature reserves with natural grassland need to maintain it by mimicking old fashioned farming techniques. To retain the desired balance of grass and wildflowers the best solution is for the area to be lightly stocked and grazed at key times of the year. The only other way to maintain sites like this is to mow them for hay.

A Solognote flying flock near the Maison du Parc in the Brenne. 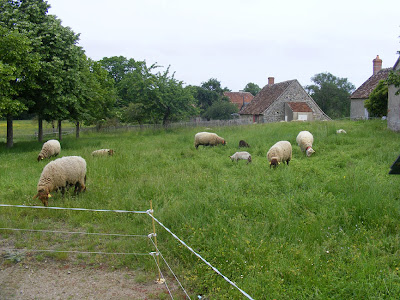 Usually old, traditional, sometimes rare breeds are used. In the Brenne the breed of sheep used is the Solognote. They also use Konik or Camargue ponies, or Salers cattle, depending on the type of 'finish' required. Each type of animal crops the grass differently, resulting in different lengths of sward and differing amounts of trampling or bare patches. Which type of animal is used depends on what species the site is being managed for. Sometimes it is nesting birds, sometimes it is orchids, sometimes it is a butterfly. Experience has shown that carefully managing a site for a flagship species with very narrow ecological requirements is usually more effective for creating overall high biodiversity than managing a site for a wider group of generalist species that tend to be ubiquitous no matter how you maintain the site.

Solognotes are one of the oldest and rarest breeds of sheep in France, originating in Berry and the Loire Valley. They are adapted to damp, poor pastures and are traditionally farmed very extensively (ie very low stocking rate). They became important in Renaissance times as wool producers and were fattened to eat. Numbers peaked in the first half of the 19th century, but by the second half of that same century they were threatened by the rise of large scale drainage programmes and commercial hunting activities in their Sologne heartland (situated between the Loire and Cher rivers).

chm: yes, to some extent the plants help the animals, in that they can be sold for a premium. They are usually organic and because they have been grass and wild herb fed, have a special something about the flavour of their meat.

And four-legged "mowers"
create all that great
manure.

Sheila: in fact you don't want too much manure, that's why the stocking rate is low and they are only there for a few weeks. Some manure for the likes of dung beetles and certain flies is good, but you don't want to raise the fertility or acidity of the soil because the wildflowers won't survive. That's why just mowing doesn't work. You must take away the clippings (as hay) or they act as a fertilizer.

The term volant ("flying") is also used to describe roaming markets (marchés volants), which move from town to town (or street to street in a big city) on different days of the week. Interesting term.

Ken: yes, interesting. And of course, we have Catherine de Medici's escadron volant