Many of my naturalist friends are first and foremost birders and they spend their time looking up, or way over into the distance. When I take people out in the field I encourage them to look down, into the undergrowth a metre or so away. This is what you could see: 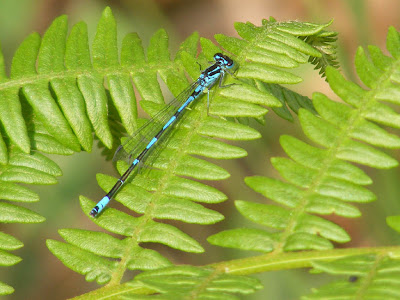 This is an example of why you have to check every individual. Nine times out of ten around here a black and blue damselfly like this will be an Azure Bluet, but occasionally, it turns out to be something else, like this male Variable Bluet Coenagrion pulchellum. The key difference is the way the blue 'shoulder' stripe looks like an exclamation mark. 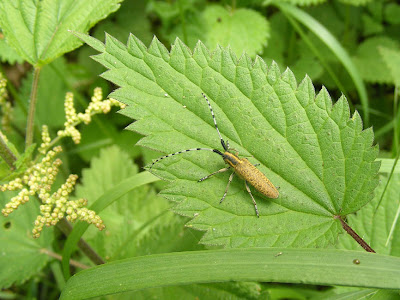 I love these beetles with their blond marcel waved hairs and ridiculous name (it's hard to tell whether the English or the scientific is more silly sounding - Golden Bloomed Grey Longhorn Agapanthia villosoviridescens!) 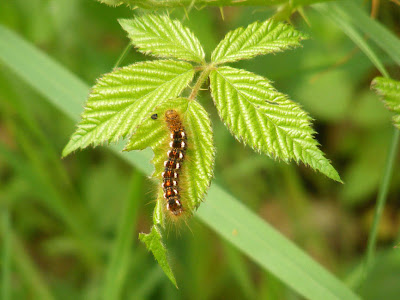 Hairily attractive Knotgrass Acronita rumicis moth caterpillars are often present in some numbers on brambles. This is a member of the huge family of Noctuidae, which doesn't have many species with hairy caterpillars. The adult moths are more typical Noctuids, being patterned in various shades of grey. 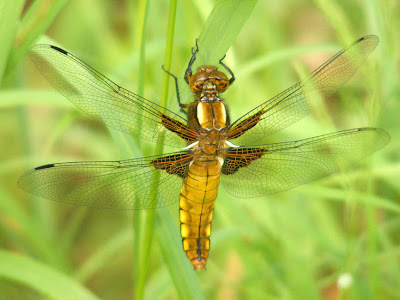 I frequently encounter female Broad Bodied Chasers lurking about in the undergrowth like this one. It is resting in the shade and probably avoiding bothersome males at the water's edge, who are only interested in one thing. 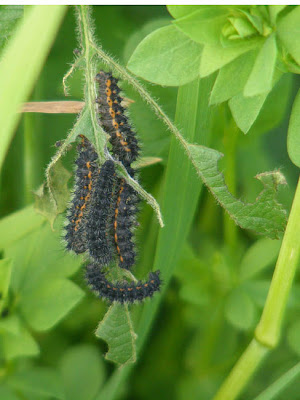 These little Emperor moth Saturnia pavonia caterpillars are only young (second instar). They are a couple of centimetres long here, but will triple their size and completely change colour, ending up as very large green caterpillars with black and yellow markings within weeks. Eventually, after going their separate ways once they are bigger, and overwintering in their coccoons (they are related to silkworms), they will hatch into impressively large moths.

With 'friends' like these, it's no wonder brambles Rubus spp are so vigorous. The two species above were not the only ones making themselves at home and eating like crazy. All these creatures, and more, were photographed in the Brenne on a single day in late May.

Email ThisBlogThis!Share to TwitterShare to FacebookShare to Pinterest
Labels: butterflies and moths, Dragonflies, Insects, nature and wildlife, the Brenne

We object! We don't spend our time looking UP! That is not birdwatching and, anyway, "birders" are just one step short of "twitchers", neither spend time watching birds, noting their behaviour, what insects they seem to be gathering, what they are getting mouthfuls for their nests, etc.
And Tim and Pauline spend as much time looking at insects and flowers as we do looking at birds.
I prefer looking at insects, I spent half an hour closely studying cricket the other evening; I still don't understand what bit of them isd a "silly mid off!"

Ron Ron: there is an article in the latest BW about Mole Crickets. I'll read it and let you know about the silly mid off.

BTW, I am only letting you get away with the birdwatching semantic snobbery because you are one of the few people I know who doesn't talk to me about 'bugs' :-)

The only time RonRon is likely to talk about bugs is if her computer is down and she can't communicate with the mother-ship!

Oh Susan, when you start a sentence with "hairily attractive" and follow up with the name of a caterpillar, you're bound to disappoint some of your readers. I for one was hoping to learn which male of our species you think qualifies in those terms.

Carolyn: so you weren't bothered that he was lurking about in the undergrowth?! Anyway, if we are talking hairily attractive, I suppose I am obliged by convention to mention my husband :-))

Glad to see that Simon is still top of your list. And, way in the future, you may find that the phrase "unhairily attractive" will come in handy.