On any summer day in the Foret de Preuilly you could see quite a few impressive robberflies. Many of them are Dasypogon diademia. 20 years ago we knew next to nothing about this relatively common predatory fly. Then Fritz Geller-Grimm spent the summer of 1995 on a German military training area making notes on their behaviour and life cycle. What he learned is fascinating. His report is here if you want to read it in full, but here are the highlights:

The sexes look different, with the male being plain black and the females having a red patch on the abdomen. They can have either red or black legs. Everything about them points to them being predators - the conspicuous beard, which acts to protect the eyes from struggling prey; the stabbing proboscis, possibly used to inject a poison and certainly used to suck their prey dry; long legs covered in bristles and claws to hold and manipulate prey. And their prey is formidable - wasps and bees, sometimes bigger than the flies themselves and armed with deadly stings. 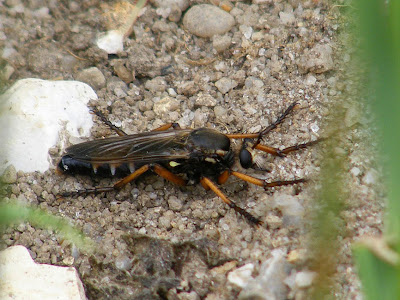 They are warmth loving, occupying dry open spaces, both bare earth and grassy. They require some sandy soil for laying their eggs. The adults appear on the wing in June and continue to increase in numbers peaking in July to about 1 fly every 10 square metres in suitable habitat, then numbers tail off again in August. The males are very restless and dart about looking for prey and females. The females tend to just sit and only fly if they spot prey. They have excellent sight, enabling them to spot prey up to 2 m away and dart out to catch it in the air using their legs. The prey is brought to the ground and killed by stabbing with the proboscis. Their hit rate is remarkably high - up to 85% of their attempts at catching prey are successful.

Females lay their eggs in clusters in the sand. The clusters of eggs are protected by a cocoon covered in grains of sand, like a little sand pill less than 5mm across. It is thought the purpose of these unusual egg repositories is to protect the eggs from drying out and from predators. When the larvae hatch they remain in the ground, preying on beetle and bee larvae in the soil. 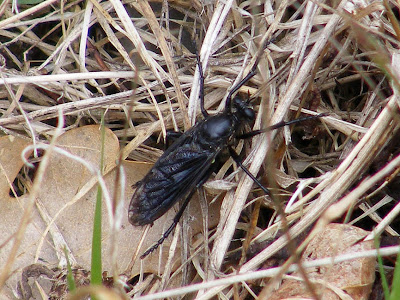 If you encounter one of these flies it is well worth a few minutes of quietly watching it. Despite their formidable appearance they are not aggressive towards humans and do not bite or sting. Nor do they carry disease or present any sort of threat towards mankind. I have written a species account for D. diadema on Loire Valley Nature which you can see here.

I wish I could identify easier, anything that looks like this I suspect of stinging!! Interesting post. Bonne journée Diane.

A Fascinating Fly and a fascinating post. The mysteries and marvels of nature revealed. Thank you.