Tomorrow (or this evening if you're in Australia/New Zealand) is your last chance to see the Transit of Venus: I can say this with authority unless you intend living another 105.5 years. 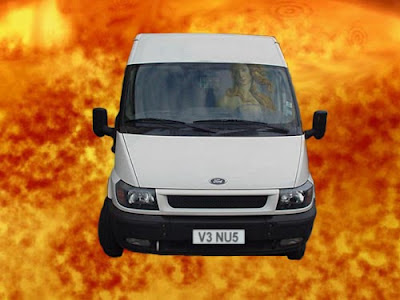 The last time Venus passed in front of the sun was on June 8th 2004. We were living in London and I used a pair of binoculars, a piece of cardboard and a camera to record the event (a guide to using this method is here).

The transit as photographed by me in 2004 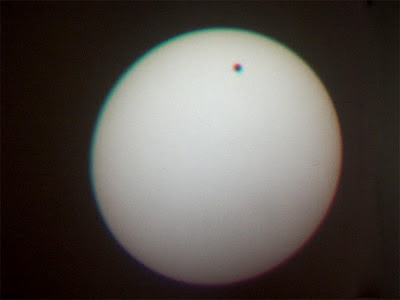 In the past the transit of Venus has been used to calculate the distance of the earth from the sun, and although that distance is now known to within about 30 metres (modern technology, eh...) the transit still holds scientific interest. This year they will be measuring how much the level of light from the sun drops during the transit and use this in the search to find planets circling other suns, amongst other things. For instance, a side effect of the measurement of the 1769 Transit of Venus was Captain Cook claiming Australia for King George III.

So don't miss it - it really is the last chance to see. Just don't look at it directly or it will be the last thing you ever see.

Thank you for that amazing
photo, Simon. After I read
your post for the first time,
I went to a site I often check:
earthsky.org/tonight.

It gives a lot of details of
where the transit can be seen,
partially and in its entirety.
We in Texas might be able to
see it if we have an unobstructed
view of the horizon at sunset.

We'll be looking, although the weather might just be against us!
;0(

Just in case we sleep late please can you take another photograph?

Them Trani vans do get everywhere!!

Sheila - go for it. It's kind of spine tingling actually seeing something like that happen.

Gaynor. It will be at sunrise here, so I an anticipating the answer is "no"

Colin - ain't that the truth.