At the Chateau of Cheverny there is some lovely furniture, including one piece in a favourite style of mine (I'm a sucker for the more is more look...)

André-Charles Boulle was principal furniture maker to Louis XIV and he developed a remarkable technique of inlaying brass or white metal into tortoiseshell for the King of Bling. The brass inlay was often engraved and the tortoiseshell was coloured red, yellow or black by backing with various substances, such as gold leaf, which could be seen through the translucent tortoiseshell. The work is painstaking, intricate and of extremely high quality. Fittings and mounts were of exquisitely moulded brass, bronze or gilt bronze. The furniture case itself however, was soft white wood, veneered in ebony wherever more intricate veneers did not cover.

A commode (chest of drawers) in the Boulle
style in the Tapestry Room at Cheverny. 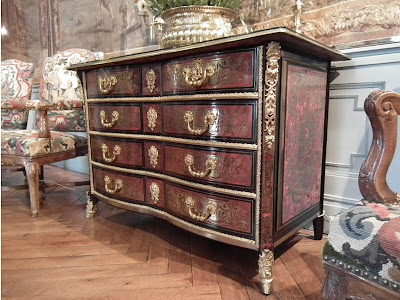 Very few genuine pieces survive that can be attributed to Boulle for certain, but he established a fashion and his sons all produced high quality pieces, as did several of their contemporaries. Boulle was so influential that the most prestigious furniture making school in France today is named l'Ecole Boulle Paris.

One of the reasons so few pieces survive is that with all those different materials expanding and contracting at different rates in variable temperatures and relative humidities, the tiny nails and animal based glues holding them together finally give out. The brass and tortoiseshell are prone to pinging out of their slots and twisting and distorting so that no matter how skilled the furniture conservator, they never go back properly. Once they've pinged they are prone to snagging on clothing and so on if the item is handled or brushed past, making bits vulnerable to snapping off completely. The tortoiseshell in particular dries out, fades and becomes extremely fragile.

The piece in the Boulle style at Cheverny is a commode. That is to say, it is a chest of drawers, an item of furniture that is wider than it is high and a French invention. The second and better known English meaning of commode, referring to a chair designed to conceal a chamber pot, came later, but they both take the French word for handy, practical or easy to use.

What a beautiful piece of furniture. The craftsmanship of some of the very old items is just amazing.

"Commode" is indeed a potential linguistic "faux ami". I once got a letter from a Francophone which signed off "Please accept this chest-of-drawers expression of my gratitude".