So that is 100,000 green bottles, and they are bottles of Vouvray sparkling, undergoing second fermentation. We have shown them before, although that was the 2009 vintage which is currently being marketed.

We have been at Chateau Gaudrelle a number of times in the past month. On one of our previous visits Charles let slip that occasionally a bottle undergoing second fermentation breaks, leading Susan to ask if this causes any serious problems. Charles assured us that because of the way the bottles are stacked, if one explodes the whole wall doesn't collapse, and the bottles surrounding it don't move. 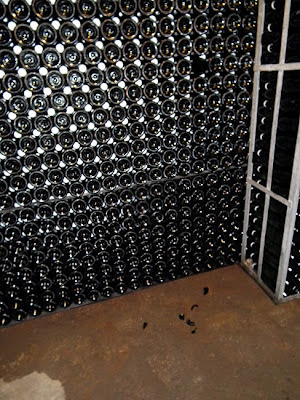 On Monday evening when we were at Gaudrelle Charles noticed a damp patch on the floor of the cave, and pointed out a bottle which had broken. Just as he had said, all the other bottles around it were unharmed and unmoved, so although the 2011 vintage is one bottle short, it isn't a disaster.

Hello Simon:
We have found you via the international bloggers party which has been reported widely on the blogs of several of our Followers. So, here we are and just in time it appears as Vouvray is a favourite tipple of ours.

We have been very pleasantly surprised, however, by the high quality of many Hungarian wines which we never came across when we lived in the UK. It is, as you write here, such a wonderful experience to visit the winemakers personally since their enthusiasm is infectious we find.

We have signed ourselves as Followers and look forward to keeping in touch.

Jane & Lance: I've seen you around on friend's blogs and checked out your blog a few times. Welcome to DotC.