A Botany Outing to Rilly-sur-Vienne

L'Association de botanique et de mycologie de Sainte-Maure-de-Touraine, my local field naturalists' club, had an outing to le domaine de la Gilberdiere, an organic farm near Rilly-sur-Vienne on 17 June. It was widely advertised in the paper and local newsletters as an outing to see orchids so the event was attended by as many general public non-members as botanising members. I was introduced to some people with 'see, we even have Australians coming' and there was a very animated and loud African man, who had clearly organised a group to come along to the outing. 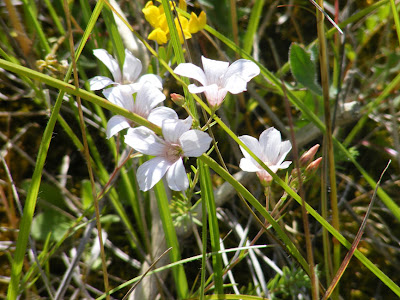 The non-members all gathered around Marc Fleury, our orchid expert, as he gave them probably more information about orchids than they really cared about by way of introduction before heading up the hill to look at the flowers themselves. The rest of us, who have heard Marc's spiel before, made a few impudent jokes about Marc holding court, then mooched off with Jean Bouton, one of our octagenarian botanists, who lives 10 km down the road and knows the site very well. 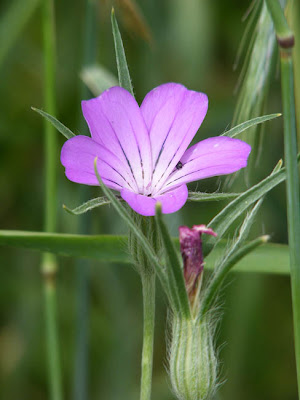 The farm's main focus is a goat dairy, but they grow a number of crops to make themselves as self sufficient as possible. Our walk took us past two sorts of wheat, maize and vegetables such as leeks and tomatoes. The first stop was a field of extremely tall wheat. It is presumably an old variety, and the farmer grows it mainly to supply the straws which are inserted down the middle of his Sainte-Maure-de-Touraine goats cheese logs. He was absolutely delighted to discover that Corncockles have appeared spontaneously in this wheat crop. This once ubiquitous cornfield 'weed' has disappeared from any farm that uses herbicides, and is now very rare. I had never seen it occuring naturally before. The seeds have obviously been lying dormant for some years, waiting for a chance to spring up. Also present amongst the crops were Field Gromwell, Hairy Vetchling and Pale Toadflax. 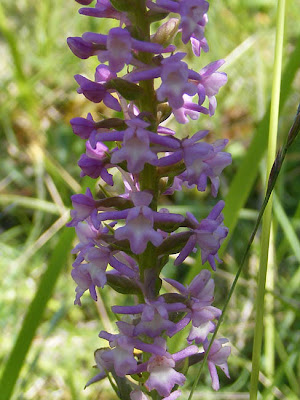 We headed for a limestone butte which is now dominated by juniper bushes. These sorts of sites are always incredibly rich botanically, as the grass in the clearings between the juniper is full of things you simply never see anywhere else. Everywhere you looked there was Fairy Flax, Narrow-leaved Flax (producing a few rather feeble jokes about feeding the world with linseed), and 7 species of orchid in flower. This is one of the few places that the Fragrant Orchid Gymnadenia conopsea and the Short-spurred Fragrant Orchid G. odoratissima grow together and produce a hybrid now stable enough to be considered a separate species, the Pyrenean Fragrant Orchid G. pyrenaica. (One of the other places all three occur is at Chaumussay, just down the road from us.) Also on the ridge were several species of butterfly that you don't see anywhere but these chalky grasslands. 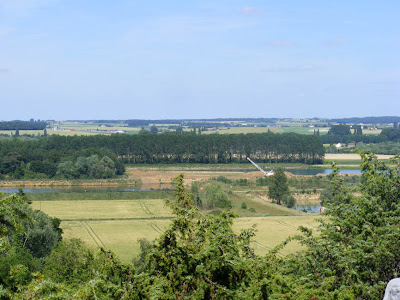 Several of the women were wearing dresses and sandals, not ideal for scrambling around a limestone butte covered in very prickly bushes. One of the sandal wearers was also worried about viperes (why wear sandals if you are convinced the countryside is full of venomous snakes?) Marc had a good deal of difficulty making her believe that viperes (adders) are extinct in the Loire Valley, and that if she saw a snake it would be a non-venomous one. He later produced a Western Whip Snake out of a box in his car, rather like a magician, and the woman bravely came forward with a few others to touch it, so I think that's another win for conservation.

From the top of the butte you could see for miles, across to Richelieu (I think - I got thoroughly lost between Sainte-Maure and the farm, so I'm not quite sure exactly what direction we were facing). On the lower slopes there was a large sand extraction operation, with several pits. Sand is one of the by-products of these limestone buttes. As everything but the hard limestone capping the butte decays, the lower slopes get a layer of sand. Jean commented that it was a shame about the pit, I guess because these lower slopes get heavily exploited one way or another. 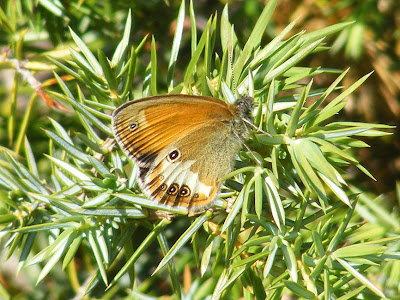 After descending through the juniper spines (I still have scratches from the previous outing!) we gathered around to partake of Marc's excellent homemade cider in what has become a traditional finale to our outings. Marc had underestimated the interest from members of the public, so there weren't enough cups. Not to worry, the first round rinsed their cups out and passed them on. Another very interesting and convivial afternoon in the field wound down and we made our separate ways home (I got lost again...).

PS Getting lost on the way home meant that I got to travel on some nice country roads in our neighbouring département of Vienne and got to see the new roadside panneaux which say 'Protégeons la flore en borde de route'. These are part of a campaign to stop people pulling up on the side of the road and damaging the flora by squashing, trampling or picking, which in turn is part of a wider campaign to educate people about the sensitive management of rural verges. I was alerted to the signs a few days earlier by my friend Sweetpea, who lives in Angles-sur-l'Anglin, where some of the signs have been installed. I'm hoping to write more about this at some stage.
Posted by Susan at 09:00

'Protégeons la flore en borde de route'. The staff say this doesn't work on the narrow roads though, unfortunately. Especially when the approaching vehicle is a very big tractor, apparently... they have to pull right onto the side to allow the tractor to pass... by itself crushing everything on the other side under the huge wheels.

They went electric fishing on the Brignon yesterday and didn't take me!!

Thanks for a really interesting and informative post. I've enjoyed reading it.

It is interesting to note that today’s post talks about Rilly-sur-Vienne and yesterday’s was about the big hole in Rilly-sur-Loire. Is it just a coincidence?