We 'hack' our way through the 'jungle'. 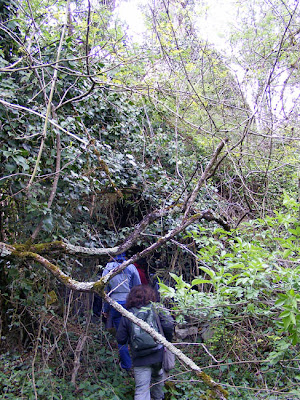 On our recent botany outing to the Puy Besnard near Chinon we took the opportunity to see a moulin cavier (literally, 'cellar mill') hidden away in the woods on the top of the Puy. These are a style of flour mill characteristic of the Anjou region of France, and especially around Saumur. This one is a ruin, overgrown as much as if it were in the Cambodian jungle, but there are a few restored and working moulins cavier in the district (the best known is the Moulin des Aigremonts, near Bléré). The top of the Puy must have been exposed and unwooded 200 years ago, and as the highest point around, the obvious position for a wind powered mill.

The remains of masonry walls in the old mill precinct. 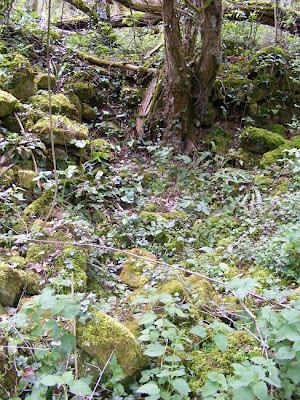 The mill would once have had a pivoting weatherboard top and sails, but all that is left is the masonry base in the form of a semi underground dome, a crumbling, ivy covered masonry tower on top of the dome and the central post that would have transferred the movement of the sails to the grindstones in the cave by means of a series of cogs and gears. 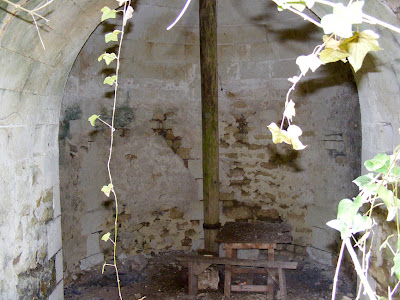 In English they are apparently called hollow post mills.

I didn’t know the word “puy,” meaning mountain, peak, was used outside of Auvergne or even Southern France.

You’re right about the jungle. It made the discovery even more interesting, I guess.

The Moulin des Aigremonts is well worth a visit on one of their open days when you can have a guided tour of the reconstructed fully working mill. Unfortunately they aren't allowed to sell the flour (health and safety...)