An Afternoon with Jean-Louis

On Thursday we celebrated 1200km of Célestine's new gearbox by taking her to Jean-Louis to have the gearbox oil drained and replaced. This enabled us to check to see how much wear the new components were getting: quite a bit as it turns out, but only "yellow metal" from the brass bushes. This is apparently expected, so Jean-Louis was satisfied. 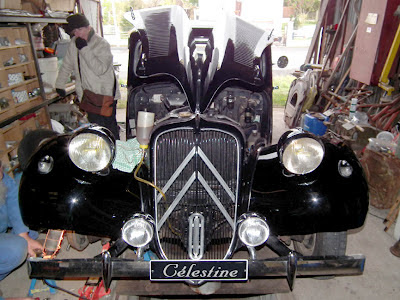 While we were there we also addressed some other issues.

This last week we have been backfiring most inelegantly as we ease off the accelerator. This is usually due to valves not opening or closing correctly, so we started by removing the rocker cover and checking the valve gaps. Sure enough, one exhaust valve wasn't closing properly, which allows fuel into the exhaust pipe and causes explosions. This was easily adjusted, and once the cover was back on we checked the engine compression, the result being most acceptable.

While the feeler gauge was out we also checked the spark plug gaps. Even though we have travelled over 12,000km in Celestine the plugs looked like new (which was good) but the gaps were out - and in one case enormous (which explains why occasionally we were getting spark between the spark plug lead and the engine block on that cylinder). Once that was fixed we started on the next task.

For the past little while the car has been very jerky, an indication that the spark plugs were firing at the wrong time* or not at all. We began by starting the car then removing the spark plug leads one at a time to see if she was running on 4 cylinders. Oddly enough, no matter which spark plug lead we removed the way the engine sounded didn't change. This was officially "a bit weird" and warranted further exploration. 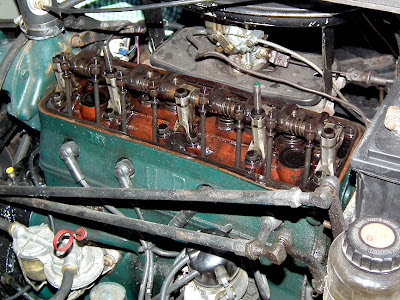 Our explorations having narrowed the problem down to one piece, we started looking at the distributor (spark timing). In older cars timing is usually fixed by adjusting the points, but there is also an "on the road" method of manually adjusting this from within the car. Literally, this advances the timing of the spark by rotating the distributor slightly. Célestine's manual adjustment had been disconnected and the distributor set so that turning the control from inside the car (which should normally turn the distributor 1° per click on the control) did nothing. The points were also showing a fair amount of corrosion through being eaten away by high energy electricity. This meant replacing the points, setting the timing, cleaning up all the contacts to and from the distributor.

The result of all this is that she is running so smoothly. We have real class again.


*Spark plugs should spark just before the piston reaches the top of its stroke: this allows the resulting explosion to force the piston down again.
Posted by Simon at 09:00

You and J-L were probably enjoying yourselves... but poor Susan looks cold and judging by that yawn.... bored stiff!

Judging by what you've just found and corrected, Célestine must be running like a dream!! And of course, more economically...

Can't do this with today's cars - no fun.

Tim: you haven't seen me recently have you? That photo will be of me coughing, unfortunately...