Green-winged Orchid, thriving in a
friend's garden in Preuilly. 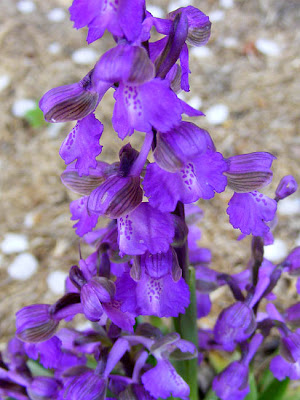 I recorded my first flowering orchid in the Claise Valley for 2012 on 12 April. In fact, they must have been out for several days previously but I hadn't seen them. 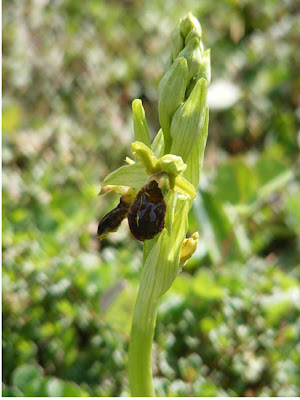 This year no Lady Orchids amongst the leaders, but there is a Green-winged Orchid flowering in a friend's garden, the same precocious Early Spider Orchid as last year, on the street corner by the médiatheque, and some of the Early Purple Orchids on the Preuilly - Grand Pressigny road at the crossroads with the Chaumussay - Petit Pressigny road are out.

Early Purple Orchid, demonstrating just exactly why
the French name for this orchid is Orchis male... 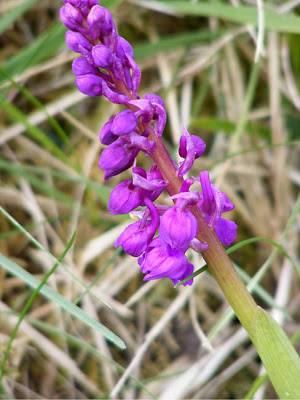 No orchids in flower so far in our orchard, and most of my really good orchid sites in the valley are north facing, so they start later and go on for longer.

Always delighted to see your
orchid photos. Did you ever
convince the mairie to hold
off on their mowing until the
orchids had died back?

Sheila: I doubt it. It's really difficult to break the maintenance crew's schedule. We'll know in a few weeks anyway.