Having been In France for a while, and having hung around mechanical types for a bit, I thought I would pass on some words I have learnt:

A random and very lovely engine from Retromobile.
I have no idea what it's from, but I want one.
(further research says it's a Bugatti Type 28 Torpedo 1922) 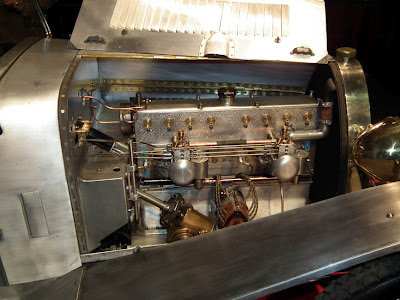 Another good word is bougies, which are spark plugs (unless you're very English or from the 1930's and call them sparking plugs). Bougies translates as candles, which are usually translated into French as chandelles, except that chandelles are what some people call headlight bulbs.

Another Retromobile engine. No prizes for this one. 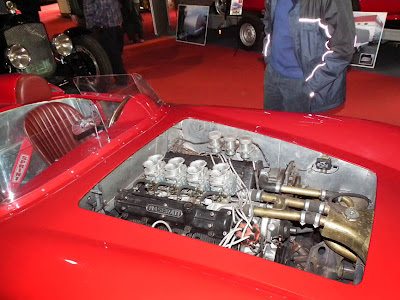 The other word I have learned is roue de secours - spare wheel, or literally "the wheel of help". This is a lot easier than talking about having a trou in your pneu.

Trust me on that last one...

That magnificent engine looks a bit Buggatti'ish... what a work of engineeeeeering art!
You'd just want to drive around with the bonnet off and see peoples faces... Sorry, Susan and Pauline... other blokes faces!!

Tim - the radiator certainly resonates Bugatti, but the Fiats were similar. I looked all through my photos, and that's the only one I have of that car.

By "motors" you mean cars/trucks/vehicles? In the US the motor is what makes the vehicle go.

Divided by a common language, we are! I enjoy seeing the differences.

Simon... I did say engine... but you've found out that it is! I was going on all the hand-built components and the machined engine bloque... even if the car wouldn't go, that engine would deserve pride of place on an Art Deco sideboard in the 'best' room.

And what prey is the french for dual mass flywheel?

Anon. I am not sure if I know the English for that one...