As we get closer to summer we are seeing more groups of cyclists on the roads. They never completely disappear over winter, but some of the less fanatical pedallers are only visible during the warmer months. 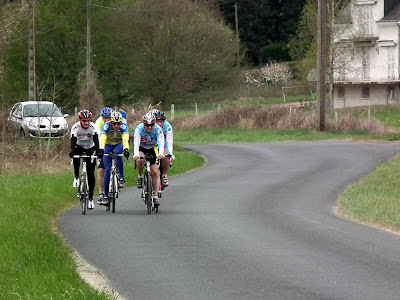 Motorists in France seem to be fairly much cyclist aware: because of the high visibility of both the cyclists and their sport (through events such as the Tour de France), people on bikes don't seem to encounter the intimidation or provoke the rage that is unfortunately the norm in some other countries.

Preuilly sur Claise has its own celebrity cyclist. In fact - he was more than a celebrity, he was the real thing.

Léon Georget was born in Preuilly sur Claise in 1879 and rose to the top of his profession as a cyclist, winning the Bol d'Or 9 times - including 8 victories in a row between 1907 and 1919. The Bol d'Or was an endurance track race, which involved riding a bicycle around a velodrome for 24 hours, following a pacer (usually a tandem, but sometimes a "triplet" or even a powered bike). The winner was the man who rode the furthest in that time, with Léon regularly covering over 900km, earning himself the nicknames of Le Père Bol d'Or (Father of the Bol d'Or) Gros Rouge (Big Red), and Le Brutal (work that out for yourself!). 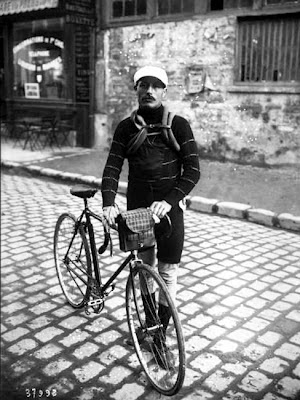 In addition to track racing he also entered the Tour de France, coming 8th in 1906 - there is an amazing photo of Léon competing here. His brother Emile, who was born in Bossay sur Claise, was fifth that year. 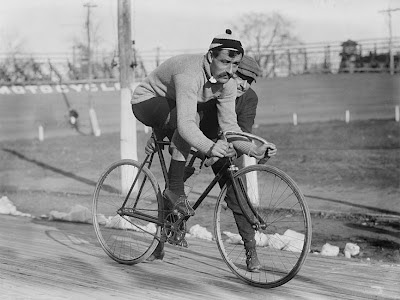 Léon's son Pierre was the silver medal winner in the 1 km track race and bronze medallist in the tandem race at the 1936 Berlin Olympics.

There is also an Australian angle to this story - Hubert Opperman won the Bol d'Or in 1928.

We often see cyclists riding in a way that winds people up. As a dog walker the biggest problem is cyclists that hurtle along footpaths and appear behind us from nowhere.

One swerved to avoid us and nearly ended up in the canal the other day. I am quite happy to step out of the way and control the dog if we know a cyclist is coming but if they don't ring their bell I don't hear them.

Maybe someone will suggest introducing a law that all dog walkers (and the dogs) should wear rearview mirrors so they can see a cyclist coming from behind !!

I might just post a blog on a similar subject soon because I'm actually restoring a couple of pre-way racing bicycles. One is the sort of bicycle that would race behind the big motors. Love this post as a tragicon bicycle things.
PS - have presents when we meet.

I traveled to France last year with my folding bike and I was amazed at how great the riding was. I thought about trying to follow the tour for a few days, but I'm not sure I'm up for that.

A lovely story and a great achievement.

Do they still have tandem races?

When I first met Tim we had a tandem. Tim's late father was an enthusiastic cyclist and often made bikes which he customised. I couldn't get used to riding on the back and we had many an arguement about how I made the bike unstable by leaning out to see where we were going.

Come to think of it we have a shed full of old bikes. Many years ago Tim made a penny farthing bicycle which is in the shed along with the other old bikes. I'll do a post on this one day...

Jean: I agree. I think cyclists are quite often thoughtless around pedestrians. Perhaps they are engaged in passing down all the bad behaviour they see themselves as putting up with from motorists? On the other hand I've also seen people step off the back of slowly moving buses with no consideration for the cyclist coming up behind. It is weird, because most people are pedestrians, cyclists and motorists at some time, but there seems to be very little empathy or recognition of issues such as whether the other can hear or see you - just blame throwing and an expectation that you come first, what ever your mode of propulsion is at that moment - it's always the other guy who is at fault.

Gaynor - I actually raced Tandems on the Velodrome in the 60s and just missed selection for the 1970 games for the event. It wasn't much later that the event was taken out of the Olympics and Commonwaelth games. Australia usually did well with gold at Helsinki 52 and Melbourne 56 games.
I'll look forward to your post on old bikes as I'm restoring a pre-war track bike currently.
Leon

Following Jean's point... If a cyclist is on the pavement there is no doubt where the blame lies.

As for motorists in France being more aware of cyclists, is it not just that with less traffic on the roads there is more space for cyclists, and in turn better visibility for the motorist?

I would not like to be a cyclist and test the awareness of motorists in and around Tours at the moment!

C&E: In principle I agree with you re footpaths, but I think the cyclist would argue that the car drivers have forced him/her off the road. Anyway, the problem often arises on shared cycle/pedestrian spaces, and cyclists often seem to think they have priority here. Cyclists don't seem to realise how suddenly they can appear, and seem reluctant to use bells or calls to advertise their presence then wonder why pedestrians get in their way. I go back to my previous point - drivers bully cyclists, so cyclists take the opportunity to bully the next ones down the chain. And no one is willing to empathise with the other or admit that both parties must take responsibility for the interaction.

Re the differences in France and the UK on the road I don't agree with you. I think there is a real difference in France, with cyclists accorded much more respect on the open road - and expecting it! However, ducking and diving in city traffic is always going to be dangerous, no matter how aware drivers are - cyclists must bear in mind the genuine physical limitations of drivers visibility if they come up behind or alongside if they want to stay alive.

Just to stir the pot a bit more, as an occasional horse rider on the road in the past, I would say that even the dumbest driver is safer around cyclists than horses - in France, UK and Australia.