Even in a cold wet April the new season's produce does eventually come in to the markets in France. Everyone gets very excited by the glamour produce like asparagus and strawberries, but appreciated on a quieter, more homely level, are the bunches of new spring carrots and baby turnips. The turnips are so pretty I have to buy them, and this is really the only time of year to eat them. Any later and they get big and too funky flavoured to be appealing. They also get bitter as the season advances.

Baby turnips from Mme Morin at the Preuilly Saturday market. 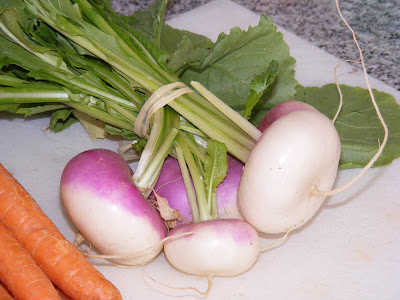 But when they are young you don't even have to peel them. Just scrub, snip the leaves and root off and cook whole, halved or quartered. These ones went in a casserole with carrots, onions, a bouquet garni and duck wings. I didn't throw the leaves out either. Turnip greens make a great spring green vegetable. I cooked them Italian style, mixed with spinach and sautéed with olive oil, lemon juice and a touch of chilli.

Turnips are generally greeted with derision in anglophone cultures these days as old fashioned peasant food. Most people wouldn't consider buying them because their family would be sure to turn their noses up when they learned what they were eating. The best the humble turnip can hope for is the occasional trendy television chef daringly serving them caramelised in honey or a few in amongst a dish of buttered baby spring vegetables. But in rural France they are still very popular, and considered an ideal vegetable to serve with duck, or in pot au feu. It's true they are also considered rather old fashioned here, but it is associated with more positive ideas of heritage and wholesome family recipes. In both cultures there is an overtone of memories of poverty and deprivation associated with the turnip and so while cooks here gladly purchase these attractive candy coloured baubles when they appear in the market, the arrival of the new season navets is not an event to look forward to and discuss like the arrival of the garriguettes or the asperges.

Turnips and turnip greens are still popular in the U.S. South. A lot of people, however, find them to be too bitter to enjoy — same with the greens and with collard greens or kale, for example. The spring turnips that you found at the market are really pretty.

Baby turnips are delicious raw - grated with a lemon/oil dressing! Like radish only more so.

Baby turnips are delicious raw - grated with a lemon/oil dressing! Like radish only more so.

Ooops, I'd better go over to the house, I think Pauline's got hic-c-c-c-up-ps.

We grew an all white variety called Virtue's Hammer in UK... they could be grated when quite large... creamy and delish, no bitterness at all... we sowed them too late here last year and only three got to any size.... then they froze!

We'll try again this year and.... hopefully... you'll be able to try them.

I love turnips...could eat that
entire bunch raw, like munching
on an apple. Same for the carrots.

Beautiful young turnips in your picture. They're also good sliced thin, used in a platter with other veggies and a dipping sauce, for finger food at parties. Most people think they're radishes then.

Emm: yes, personally, I think radishes and turnips are interchangeable.