At the recent Foire de Saint-Georges in Preuilly I ran into my friend Albert. He's the former postmaster here and quite interested in wild flowers. He mentioned he'd been fishing on the Aigronne River (one of the tributaries of the Claise) and had seen good numbers of Fritillaries out a couple of hundred metres up from the Chateau de Ré, growing in the grass amongst a riverside poplar grove. I knew there were a few Fritillaries growing in the valley, but I hadn't realised there were any sizeable colonies, so this was most interesting news.

The Chateau de Ré on the banks of the Aigronne. 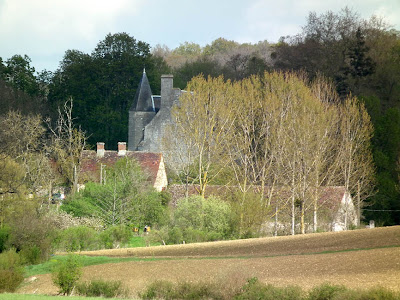 He also mentioned he'd seen Purple Toothwort too, so the next time I had an opportunity to be out along the road between the two Pressignys I checked the bankside vegetation at one of the bridges. Unfortunately I didn't have time to check his Fritillary site, but I did find a good colony of Toothwort at the next crossing downstream.

Purple Toothwort on the banks of the Aigronne. 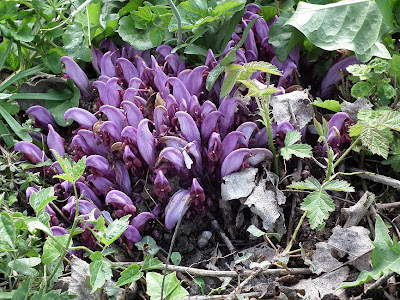 Purple Toothwort Lathraea clandestina is completely devoid of chlorophyll and relies for its nutrients on the trees under which it grows. It taps in to their root system and does not have any leaves, only sending up a dense cluster of stalkless purple flowers in the spring. It is an uncommon and unusual plant, related to Broomrapes Orobanche spp. It is also reminiscent of the Violet Limodore Limodorus abortivum, an almost chlorophyll free purple orchid which uses its association with a root parasitising fungus to live off the surrounding trees.

There are apparently a number of colonies of both Fritillaries and Purple Toothwort in this section of the Aigronne Valley, between Le Petit Pressigny and Le Grand Pressigny. At the moment there is quite a bit of activity along the river as it is the focus of a 'makeover' designed to improve water quality and biodiversity. Our friends Tim and Pauline, who live right in the middle of the valley have expressed some concerns that the work is too geared towards creating the ideal trout fishing river, possibly at the expense of other species and interests. You can read their first hand observations of the project and of some equally worrying modern farming practices on their blog Aigronne Valley Wildlife.

I, too, wonder what the effect of removing the poplar plantations will be on the colonies of Fritillaries and Toothwort, since both are often associated with the poplars. Will they survive the disturbance?

Anyone looking for some live Australian Rock and Roll should tune in to ABC Digital. One of the best mates a bloke has ever had is playing at Rooty Hill RSL (don't laugh, it's famous) in a band called "Rocket to Nowhere", as part of the Australian Broadcasting Corporation's "Exhumed" talent quest. Rock on, Alessio.

PS - Rocket to Nowhere (cool name) didn't win, but they sounded good.
Posted by Susan at 09:00

Susan, I don't think the plantations are going. it seems to just be the river edge poplars. I'm busy writing a further instalment on the work. It will be up later, once Tim has stopped playing with his birthday present and added a couple more pictures.

I am looking for the relevant pictures at the moment, also Pauline and I took some more as we went into GP this morning. I just looked at your 2008 post, and it seems that, apart from hidden parts of furniture, no-one mentioned the use as planks for flooring and for purlins in roofing... we had two new ones put in on the donkey shed when it was stabilized and re-roofed.
The great advantage of poplar as a constructional timber is its strength to weight ratio... very strong for its weight.
As a biomass it will win on the fast rate of growth vs the poor calorific value [when compared with oak, hornbeam or chestnut that is!]
Pauline's pix for this morning will have to wait.... she's lying on our bed, trying to unknot her back... we arrived home from GP to find our summer timber had been delivered.... and there were black clouds looming up down the valley!!
So we spent the better part of the afternoon moving 5 stere of proto-hot-water into the hangar.