A couple of weeks ago we we driving to Azay le Rideau with some guests from Denver Colorado. I decided that instead of driving the main road from Monts we would follow the Route de la Vallée du Lys, an old road renamed after the Balzac novel Le Lys dans la Vallée which was set in the area.

I think the passengers were rather surprised when Susan and I got all excited and stopped the car by the side of the road when a completely unexpected Éolienne Bollée came into view, but they were polite enough to indulge us long enough to take some photos. 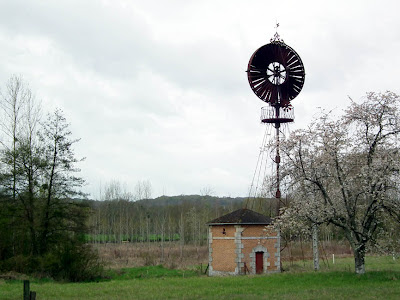 I have started a map showing the locations of the various Éolienne Bollées we have visited and photographed. This will be added to over time, thanks to the stirling work done by the people at Archiving Industry. 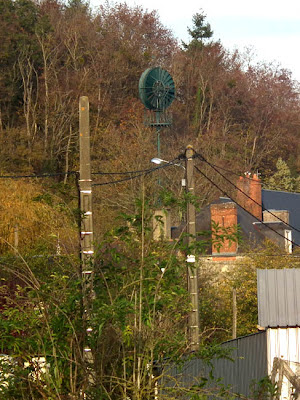 I love the delicate little weathervane on the top! Is that part of the standard éolienne, or was it added by an owner? Pauline

Pauline. I think that it was one of the many options. You could have it as ornate as you wanted.

Tim for real this time... have you seen the one at Château de la Bourdaisière... it is a climb the staircase one. 9€s to take a look at it from the tomato plot [where there is a nice noticeboard all about it...] or come over here and look at the pix [same as all the others] and the pic of the notice and save 9€s less the cost of driving over!!