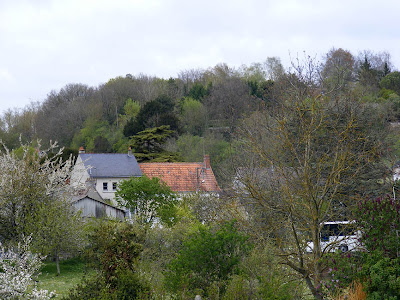 The market gardener I buy my vegetables from at the Preuilly Saturday market was complaining that this year we haven't had enough rain and worse, it is too cold and nothing is growing. We have temperatures not going above 14C predicted for at least another week and I am starting to worry I won't get a butterfly survey in for April (if the temperature doesn't hit at least 16C, we don't survey). 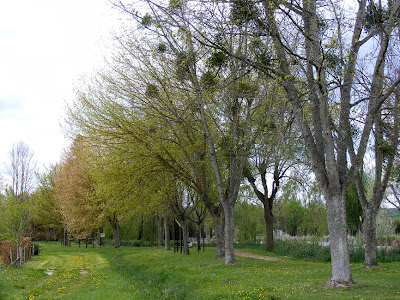 According to one of my local botanist chums the date that the trees here are expected to be in full leaf is 15 April. He predicted on 1 April that they were going to be late, and indeed, in general they are, although like any year it varies from tree to tree and species to species.

One of my butterfly transects near Boussay, 16 April 2011
- an exceptionally dry and rather warm spring. 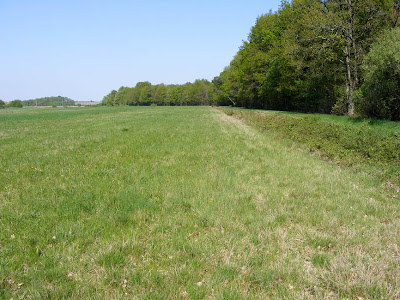 Personally I thought 15 April would be ambitious for any year, and I went back through our photos to compare and contrast. There are some differences, but it is difficult to know how much of that is down to the fact that my photos don't all show the same trees on the same date. My impression is that full leaf is more like 25 April to 5 May.

A slightly different view of the hillside behind
our house, 23 April 2010 - a very cold spring. 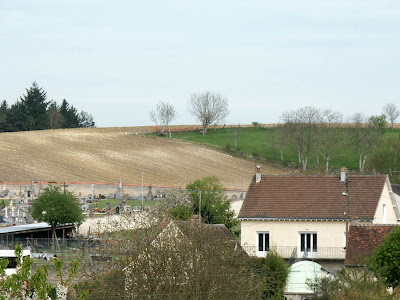 There is a long running French citizen science phenological project called the Observatoire des saisons, but I'm afraid I lost patience trying to work out what their data meant, and the situation is a lot less clear than in Britain. There have also been two important studies of oak trees in France which are widely cited in climate change reports. These studies showed that average temperature for March and April is the single most important factor affecting when leaf burst and full leaf spread occur, with leaf spread taking fewer days if the temperatures are higher. Oak trees have been shown to respond more directly to rising average temperatures than other species. However, the effect of temperature slowly dwindles as the days lengthen, thus the maths to create an index or a formula for prediction gets quite complicated. 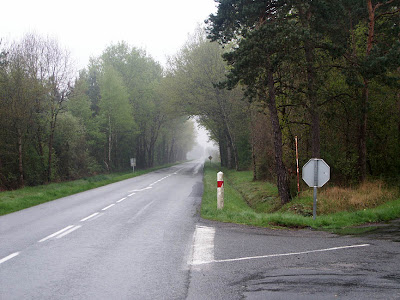 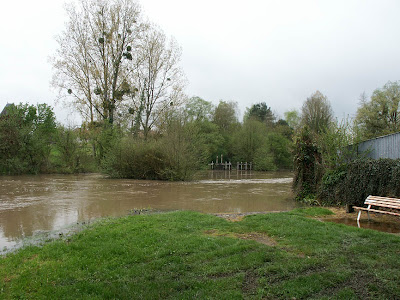 Word is that the muguet (lily of the valley) might not be in full bloom by May 1 this year.

And it is 'bloody nithering' outside!!

Meteociel is forcasting nothing higher than 15C at least until 25th... erg!

Well, it's budding up at the moment. I reckon at least some will hit their mark, but I could be wrong. Always a really difficult thing to predict.

PG: and as I am sure you know, Ash has never leafed before Oak for the past few decades and never will again, what with climate change. I'm extremely dubious that it ever did.

There's an old saying in French :

Let's hope it gets warmer in May. People here always tell me about the year with they had 10 cm of snow on May 9th.

Ken: yes, I know the saying and you don't see me casting my clout (the equivalent British saying, with appropriate adjustment for latitude).

Carolyn: which as we have noted before is exactly the opposite of the British saying. Anyway, with climate change the lag between Ash (unresponsive to average temps) and Oak (very responsive) increases year on year.

I don't know what "casting clout" means. Sorry, my comment was full of typos. Going too fast.

Okay, I looked it up. But I didn't come to France to learn British English!

Ne're cast a clout 'till May be out... refers to Hawthorn... not the month!