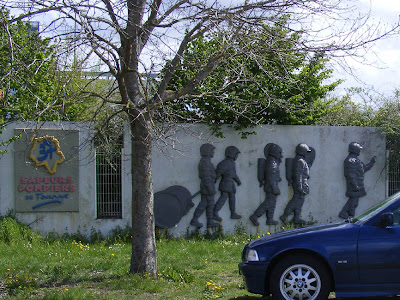 L'Association de botanique et mycologie de Sainte-Maure-de-Touraine, my local botany club, had an outing to the Puy Besnard at Chinon on 22 April. The Puy Besnard is one of a series of limestone buttes to the north-west of the historic town of Chinon, and is a very significant botanical reserve. It is the sole site in the Loire for species such as Grass Leaved Buttercup Ranunculus gramineus, and a significant site for Pasqueflower Pulsatilla vulgaris, a beautiful plant that has become very rare in the wild. 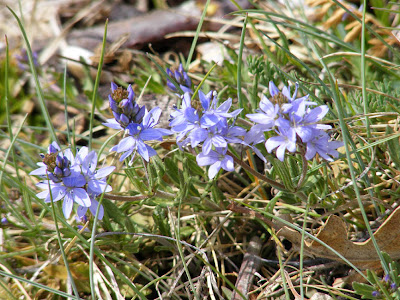 Les Puys du Chinonais are 6 outcrops of between 65 and 90 metres above sea level, capped by hard limestone formed in the Cretaceous period, and with sandy lower slopes resulting from the erosion of the ancient plateau. They face south, giving them a quite mediterranean microclimate characterised by wooded summits dominated by Downy Oak and Maritime Pine; dry flower rich grasslands on the slopes and at the base, cultivated vines and cereals. 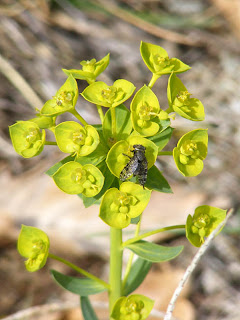 The intermediate level of grassland is where all the botanical interest lies. The slopes were once grazed, or if it was not too steep, lightly cultivated, but these areas have now been abandoned for agricultural purposes. This means that the Conservatoire du Patrimoine Naturel de la Région Centre (the Centre Regional Conservancy for Natural Heritage) now has to 'artificially' manage the site to prevent volunteering scrub from overtaking the landscape and crowding out all the small plants of interest. 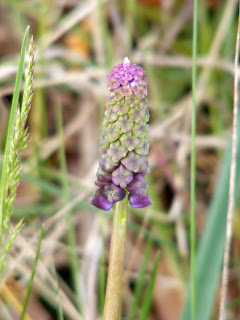 We met just outside the Caserne des Pompiers (the Fire Station), which is on the Chinon bypass. Once everyone arrived we set off in convoy up the hill and to the left. A few minutes of ducking and diving along the back roads and we were gathered in the carpark of the reserve. 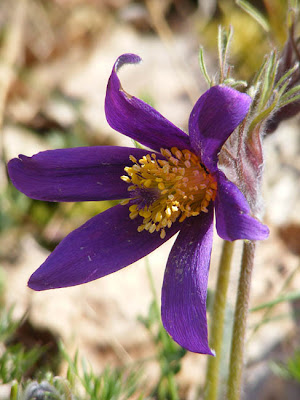 On the sandy slopes Rockroses Helianthemum spp, Spurges Euphorbia spp, Early Spider Orchids Ophrys sphegodes, Vetches Vicia spp and other pea flowers grow amongst the Sheep Fescue Festuca ovina. If you go a bit further up you find Black Spleenwort Asplenium adiantum-niger and Tassel Hyacinth Muscari comosum. Best of all, on the southern end of the site is a significant colony of Pasqueflower Pulsatilla vulgaris, a plant I had never seen in its native habitat before.

The southern tip of le Puy Besnard looks over the valley to
the nuclear power station at Avoine. 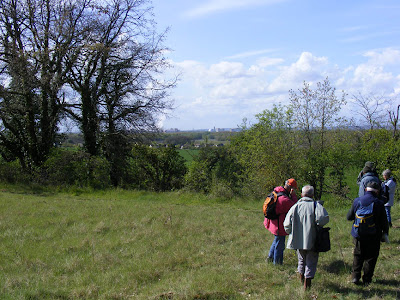 PS Curiously, even though this was the date of the first round of voting for the presidential election, and a remarkable 80% of registered voters turned out, I did not hear one word of politics over a 4 hour period in a group of 25 French people! In France it is not compulsory to vote, but it is compulsory to register on the electoral roll (it's a kind of officially overseen rite of passage here). Politics is normally hotly discussed at any gathering too, and I would expect people to be keen to know what I, as a non-French national, thought. But no - apparently botany is even more important than politics!
Posted by Susan at 09:00

Tim on PG's machine... nice pix Susan.. especially that fly... very pretty wings. Norfolk Wildlife Trust uses its "Flying Flock" to manage these types of site... except at Thompson Common, where they have some rare-breed ponys to do the work.

Tim: Indeed, flying flocks are considered ideal for pasqueflower site management, but they are complicated to manage. This site is not fenced, so bringing sheep in for a few weeks would involve temporary fencing, temporary stock watering place, temporary yards and ramps for loading and unloading the stock. The area that reqires grazing is very small and you would need to prevent them getting into the wooded section on top. At the moment the site is grazed by rabbits, which is considered the next best thing, but the payoff is the damage they do with burrowing and digging up and eating pasqueflower plants.

Susan, I thought if anyone would know, you would... I keep seeing a wild flower at the moment and I've no idea what it is. Its leaves are long and grass-blade shaped - kind of lily-like but skinny. It's growing along the roadside in shade. It puts up one flower head - kind of like an allium, I'd guess - which is black, but when the flowers open, they're kind of a creamy white. The flower reaches about knee height on me. Do you have any idea what it is?

LJ: It sounds like White Asphodel. I have written a page for it on LVN: http://loirenature.blogspot.fr/2009/12/white-asphodel-asphodelus-albus.html