Wildlife Watching in April in the Touraine du Sud

Today I am off on an outing with the local field naturalists club, l'Association de botanique et de mycologie de Sainte-Maure-de-Touraine. We are visiting a little valley near Truyes (north of Loches) to study mosses and have a general botanise. I am the only non-French member of the club, but so long as I can remember to say all the scientific names with a French accent, we will get on just fine. I know next to nothing about mosses though, so it will be quite challenging keeping up. I imagine that everyone will be bemoaning how dry it is and worried about the effect on the orchids and other special plants of the area. Our first outing where we are likely to see orchids in flower is later in the month, to les Puys du Chinonais. I will also be off sometime during the month to do my first butterfly survey for the year.

More generally, things to look out for are:

Orchids - the spider orchids, Lady Orchids and Early Purple Orchids will be the first to flower. The Monkey Orchids won't be far behind, and even though we had an exceptionally cold spell in winter this frost tender species would still have been dormant at the time and unaffected. The current dry spell is another matter though. 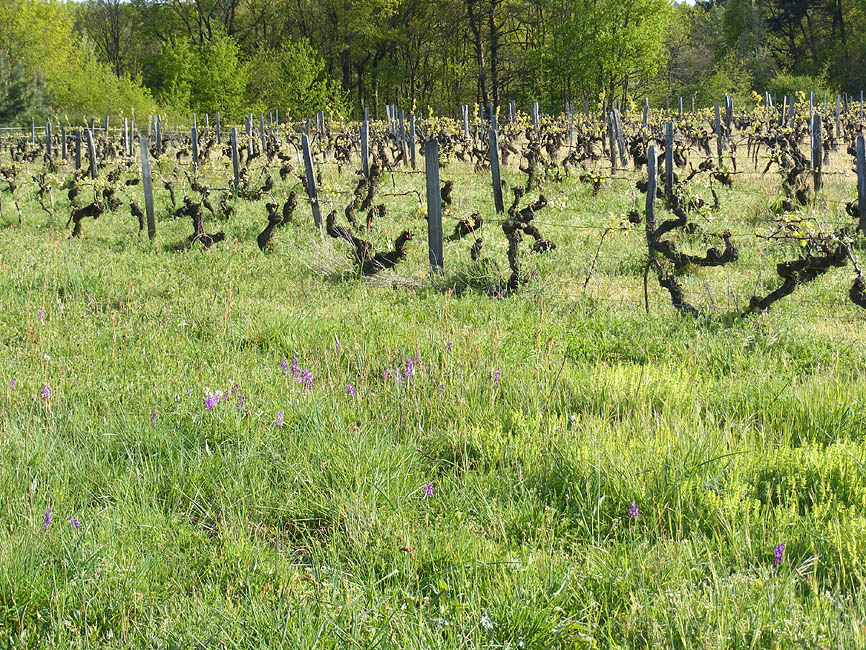 Other Wildflowers - look out for the intense blues - Long-leaved Lungwort, Purple Gromwell and Common Columbine. Most years you could add Sweet Violets and Grape Hyacinth to this list but they have been flowering for much of the previous month already. The violets will continue but the Grape Hyacinths are coming to an end. Another very striking spring flower that has started early in places is the Greater Star of Bethelehem, pure white stars with a green midrib running down the underside of each petal, on every roadside bank.

Butterflies - the first generation of blue butterflies such as the Provencal Short-tailed Blue and the Common Blue will be out and about, looking for places to lay their eggs and produce the autumn generation that will overwinter as caterpillars. The first Fritillary species to be on the wing is normally the Violet Fritillary, found anywhere there are wild violets growing to feed their caterpillars. However, I am hearing reports that some Fritillary butterfly species caterpillars have not survived the winter well. Certainly there has been a disturbing lack of Glanville Fritillary caterpillars scooting across the potager and hanging about in the Ribwort Plantain this year. There were communal nests amongst the plantain at the beginning of winter, but I found no survivors in March.

Skipper butterflies like this Dingy Skipper can be
seen sucking moisture from damp earth in April. 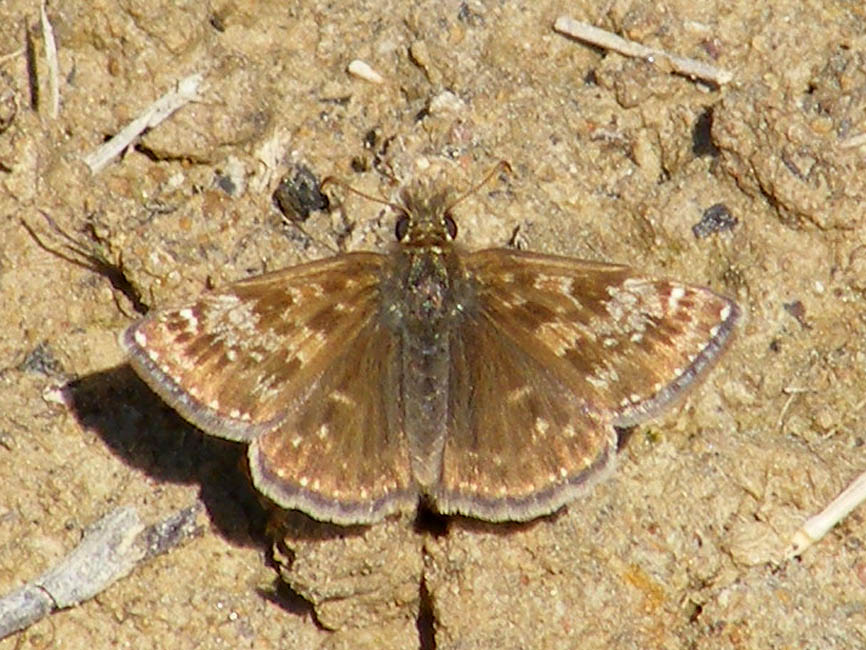 Beetles - it's big bomber chafer time in April, with Rose Chafers and Cockchafers lumbering about or munching their way through the stamens on your roses and paeonies.

April is the month you start finding moths in the street, exhausted by their night of dancing attendance on the street lights. This one is a Lunar Marbled Brown I encountered last year. 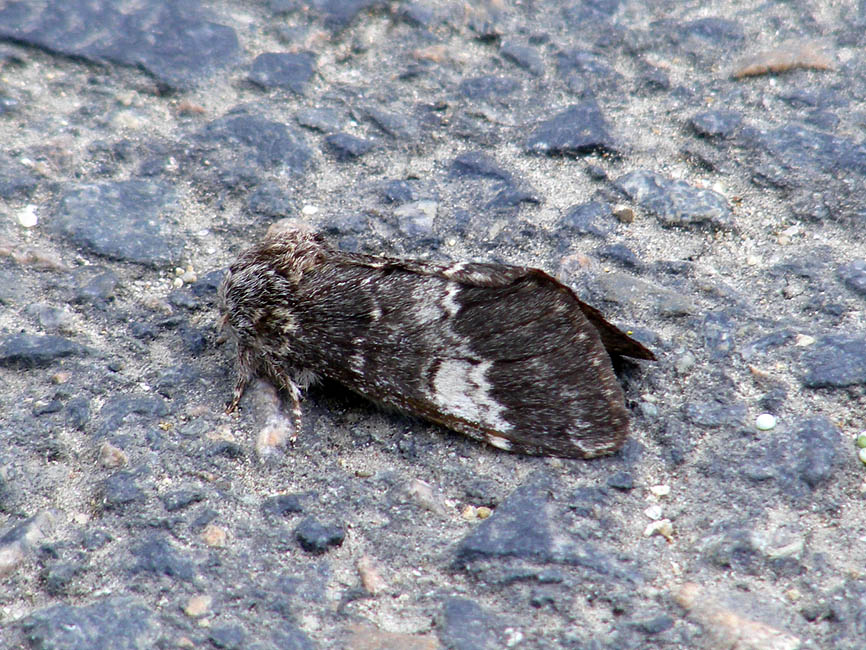 Flies - yes, Flies! Some of the most attractive of the craneflies, Ctenophora and Nephrotoma, will appear, resting on vegetation with their absurdly long legs dangling all over the place. The adults are completely harmless and whilst the leatherjacket larvae might eat plant roots, they also provide a significant source of nourishment for farmland birds. Prepare to be surrounded by the curiously misnamed March flies in April too - species in this family such as the Saint Mark's Fly emerge traditionally around the Saint's Day (otherwise known as Anzac Day...). And of course there is everybody's little fuzzy friend, the Dark-edged Beefly, who has already been with us in good numbers this year from mid-March.
Other Insects - the Field Crickets emerged from their burrows to sit in the sun in March, but this month they will start calling attention to themselves, literally, with their chirruping in warm weather.

You will see 50 gazillion Gendarme Bugs in pairs, trios, dozens, over the summer, but this lookalike cousin is a different, solitary species called an Assassin Bug, also out and about on buggy business in April. 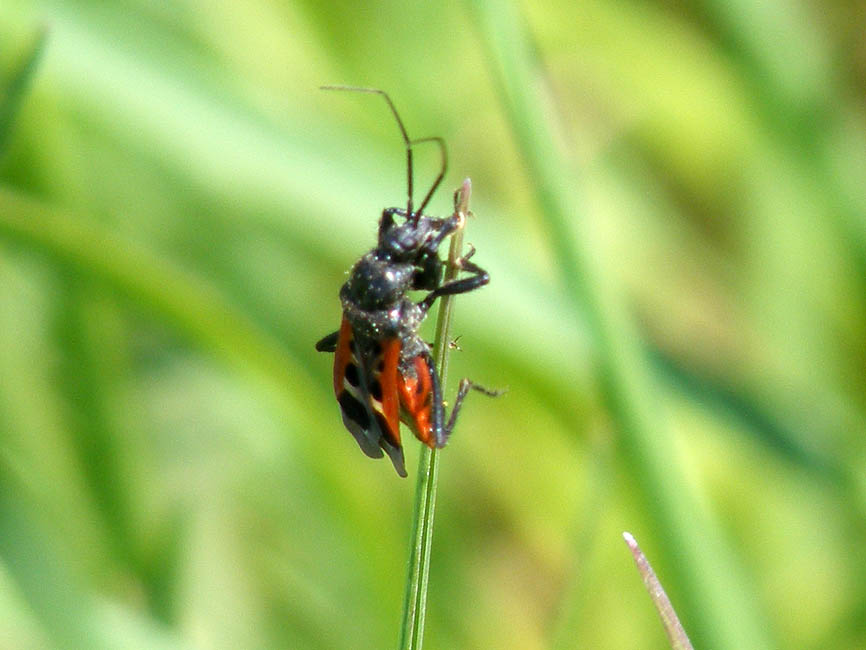 Happy wildlife watching. I've got no idea what the weather is going to be like - let's hope it rains a bit, but sunny days are always nice too.

What we need are April Showers!
But meteociel is forecasting MODERATE FALLS OF SNOW overnight on Tuesday!!