Moss Heaven at the Lavoir

Le ruisseau de Truyes with its stone vault cover and profusion of aquatic plantlife. The larger plant in the foreground, looking a bit like a fern, is Fools Watercress Apium nodiflorum - it's not poisonous like many of its lookalike umbellifer cousins, but it's also not related to Watercress (part of the cabbage family) and doesn't taste of anything. 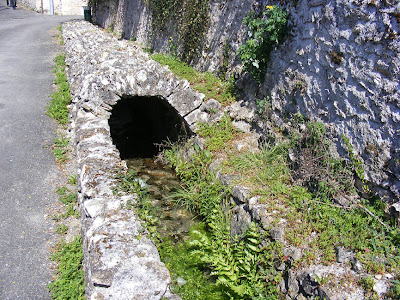 The botanical outing on 1 April was primarily to look at mosses. Our first stop was the ruisseau de Truyes, a stream that runs down the side of a lane behind the church. It must come from a source up on the hill where the chateau sits overlooking the church. The water is absolutely crystal clear and on a sunny day creates a beautiful sparkling background to a host of mosses, liverworts and aquatic plants.

Marie-Claude dangles over the edge to pluck a little sample of moss. Most mosses you have to look at under magnification to identify to species level, so samples are necessary. 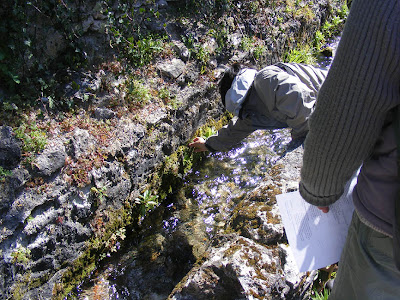 The stream is covered in a vault of rough stones for part of its length, then open with the sloping platforms of the lavoir (public laundry) at the side, before broadening into a shallow pool which is home to a dozen or so mallards (all clearly expecting treats). 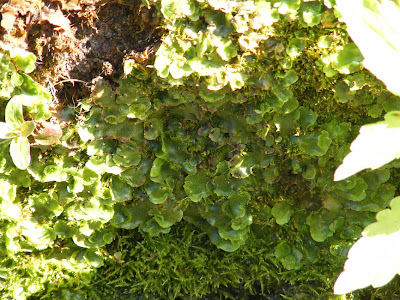 Everyone got down to business, spotting mosses, lichens, liverworts and some interesting plants. On this short length of wall along the stream there are 6 species of moss and a liverwort, as well as Common Cornsalad and Fools Watercress. Our moss expert was Corinne, a stalwart of the club, and I was very interested that her recommended field guide was in English, published by the British Bryological Society and available online or in print. Typical of European naturalists, most of the group knew enough English (and probably German and Italian) to work their way through a technical key to identify a species. This is not like being fluent in these languages, but because the technical words tend to be the same, you only need to learn a limited vocabulary to understand most of the key. Good keys these days are well illustrated too and this helps a lot. One of the other women, who had a copy of the book, said to me that she actually finds it easier to use than most French guides. Her comment was that British field guides get the tone and level of technical language just right so that everyone can understand them, whereas French guides either vulgarise (ie only use common names and dumb the information down, to the frustration of serious amateurs) or are so academic as to be unuseable by these same serious amateurs.

Loic risks wet feet to take a closer look at a plant on the wall. His left leg (street side) is between two concrete washing slopes, I assume once used to slap and soap up the laundry. Marie-Claude is over on the left with her nose against the wall looking at lichens (her special interest). 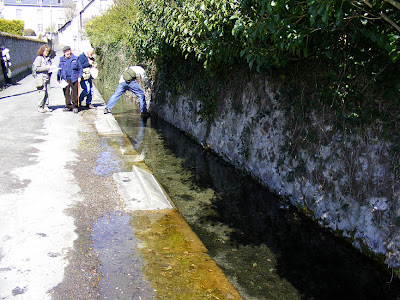 So...now I know slightly more about mosses and have been introduced to a fantastic resource should I wish to identify mosses on my own in the future.

A Mallard drake bobs on the clear shallow water. 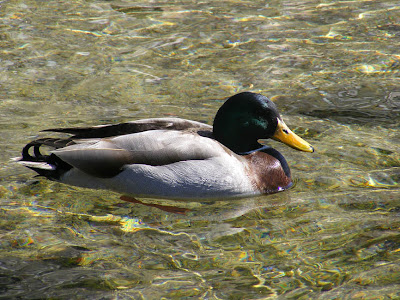 And, thanks to this blog, Susan, the BBS link is now on the links page of Aigronne Valley Wildlife filling in the gap I had for Bryophytes... you sound as though you had a wonderful day out.

Oh, the white Fritillary is just about to come out.... I found it yesterday. I just hope the two male Blackbirds, that are currently fighting near where it is, aren't on top of it!!