The Vexed Question of Coffee

[rant]
I spend quite a bit of time on travel forums, and I also read food blogs.

One thing that I see often is discussions on coffee - either people asking about how to order their favorite kind, or mentioning about new coffee shops opening (usually in Paris). And although I have quite a bit of respect for some of the writers, I get the distinct feeling that when it comes to coffee, they just don't get it. Of course, it doesn't help than many of the food writers are North American or Australian, and come from a culture that drinks coffee all day every day by the big milky cupful.

That isn't how a Frenchman drinks coffee. A big milky cup with breakfast, then a petit noir after lunch and maybe dinner, and that's it. He may drink a small cup of coffee instead of having a glass of wine in a social situation. If he is on holiday he might stop mid-morning or afternoon and have a coffee and a petit gout, but rarely will he have a cappuccino or frappuccino, and I imagine if you offered him a gingerbread latte he would drink it - once - as a cultural experiment, whilst thinking that foreigners are weird.

Coffee is drunk after a meal, not instead of water 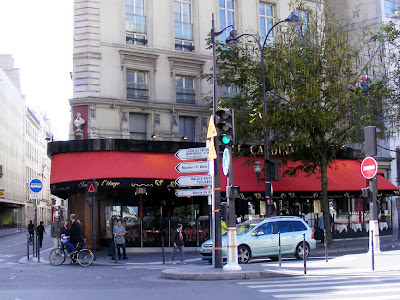 I now address this to people who complain about French coffee being bad:

Coffee in France is treated as a digestif. Many French people would no more drink coffee all day than they would drink cognac or calvados all day. That's the way they grew up, and the coffee they drink is the coffee they like for the purpose they drink it. Just because it isn't what you drink it isn't "bad", it's different.

And this is the point of my little rant. Coffee is part of the food culture and deserves to be regarded as such. You wouldn't say that French steak is bad just because it is served rare, nor would you complain because French bread isn't like Tip-Top, WonderBread or Tescos own brand, so don't complain about the coffee.

It says that it is a café, but most of the clients
will be drinking something cold and alcoholic. 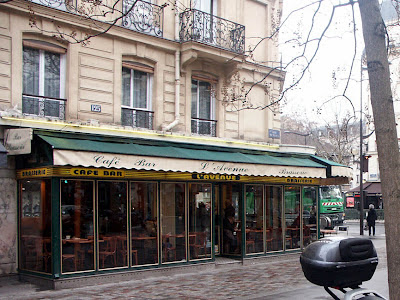 I have no doubt that you would be offended if a Frenchman opened a tea shop in Bourton on the Water saying that English people make bad tea because they boil the water. Likewise, if frenchman opened a Mexican restaurant in the US saying that American chile con carne was bad because it had too much spice in it, you might think of him as less than polite.

If you want to know the articles that offend me so much, read this, this or this. And if you really want to offend me, call yourself a barrista. You'll probably get called something else.

Something that starts with W.

Love the HTML [rant][/rant]!
This quote is good "They also use the bizarrely assiduous 24-hour filter drip method – a glass apparatus with a cloth filter, which drips cold water very slowly over coarsely ground beans. The resulting coffee is served cold and is said to be richer in flavour than coffee made the traditional way."... much the same way as coffee beans that have passed through the intestines of a bizzare Asian animal... and both probably cost the same... a fortune.

In the Prehisto in Grand pressigny, you can get an expresso that is rich, tasty and doesn't really need sweetening... and still makes a good stimulant... two of those are jumping juice.

Tim
(on Pauline's machine... mine won't let me talk to the world today!!)
The WV is Dntri Enhlu"... the Russian who is bringing Vodka Coffee to the "wurld"

On the subject of coffee I don't have strong opinions either way - perhaps because I rarely drink it.

I could write a book about chocolat chaud though ...

Simon,
I never knew you were such a good ranter, please do keep it up.
It's very amusing.
Oh, BTW, I prefer French bread and Italian coffee, two things they never learn't from each other.
Leon not Sue

Good rant. I have loved the French coffees I have had..all of them. Yes, I am the guilty of being the "milky coffee" American, but the times I have been in France all the cafe au laits and cafe vennoise (sp?) have been excellent especially compared to the pot burned coffees I have dared to sip state-side.

Leon: Blimey - you haven't spent much time around Simon, have you?

A bit tongue in cheek on my part. It only took one meeting to know!!!!
Bet you are enjoying spring and what it brings.

Leon: Well thank goodness for that - I was a bit worried about your powers of observation for a while!