Truyes is a small town on the north bank of the Indre River, about 20 km from Tours. The Indre Valley is one of the most picturesque in the district, with many attractively situated mills and beautiful riverside drives. Balzac spent a lot of time in the valley further down stream, around Saché, and it features numerous times as the setting in his novels.

I'm not quite sure what this is - garage? cellar? Anyway, it appears to be part of the Chateau de Bel Air complex and I liked its Mediterranean style garden with the big Stone Pine. 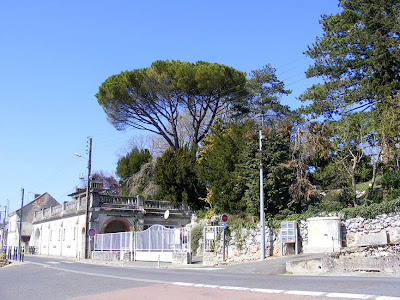 The population of Truyes is around 2000 people, but like many towns along this river it forms a larger urban area by being directly across the river from the town of Cormery. They have separate administrations, but you simply cross the bridge over the Indre and you have crossed from one to the other. The towns grew up because this is the site of an ancient ford, but remained separate because the rivers often served as territorial boundaries in the medieval past.

The 12th century church of Saint Martin in Truyes with its 15th century 5 storey belltower, one of several medieval churches, chapels and abbeys in the paired towns of Truyes and Cormery. Niall and Antoinette wrote one of their erudite posts about the abbey at Cormery on Chez Charnizay recently. 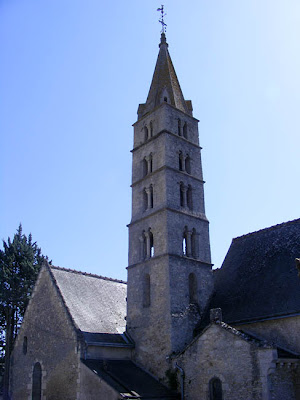 Truyes isn't somewhere you will find in many tourist guides, but it is attractive enough for all that. I suspect a lot of people miss Truyes because it is not obvious from the main road how much of the village, including the real centre, is off to the east. You could easily spend the day wandering about Cormery and Truyes, popping in for an artisan beer at the brasserie in Cormery and walking along the ancient pilgrim path around Truyes. If you visit at the right time in August the Fete de Cochon will be in full swing too.

The 20th century chateau of Bel Air, now owned by the commune (so I assume it is the salle des fetes - village hall). 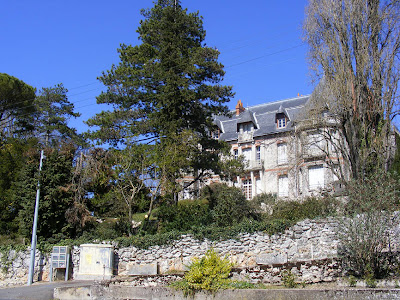 I didn't get much of a chance to look around or to find out a lot about Truyes when I visited for a botanical outing, but I thought the area around the Eglise Saint Martin was lovely.

Email ThisBlogThis!Share to TwitterShare to FacebookShare to Pinterest
Labels: Churches, Pictures of Chateaux, Towns and Villages near Preuilly

You forget to mention a very rare archeological phenomenon in Truye : the "resurgence" of a hidden river that disappears a hundred kilometers away.

Pierre: I didn't mention it because I didn't know about it! Tell me more!

Pierre has emailed me to explain how to get to the reappearing river. I interpret his description of where it is as the bottom of rue faubourg. He also tells me there is a lanternes des morts in the cemetery, unusual for this area.

Truyes is a name that doesn't give you much desire to visit, but now that I've read your post I'll stop there one day. Truyes is a homonym of truie, which means sow. Silk purse, and all that.

Cormery is known for macarons, too.