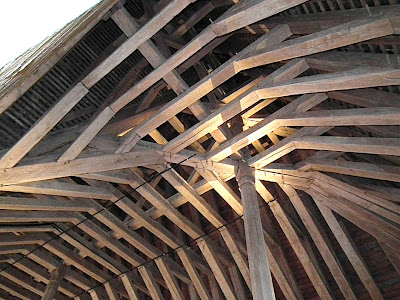 On visiting the château d'Azay-le-Rideau recently, we were delighted to discover that the attic space is now open to visitors. All this year les combles (a term that indicates useable, even occupied, attic space) have been the subject of a major restoration project. My contact at the château, Héloise, tells me that they have spent €700 000 and have two and a half months to go until the project is complete. 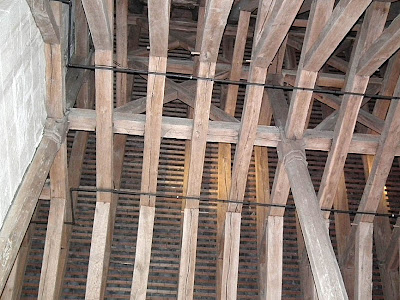 What has been revealed is a truly magnificent space, with the most remarkable example of renaissance master carpentry now on show. The steeply sloping roof of Azay is covered in slate and punctuated by numerous highly decorated dormer windows, designed to accentuate the height of the building. Inside, the attic is constructed à surcroit, that is to say, the external walls which support the carpentry are raised well above the floor level, thereby creating much more useable space. It also had the important advantage of allowing easy access to the wall-walk, a defensive arrangement resting on the corbelled upper sections of the towers and walls. In addition, the extra height of the Great Hall below could be accommodated. 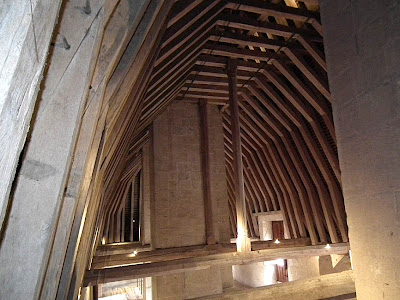 The original carpentry is of a very high standard, with considerable care being taken in the choice of timber, methods of construction and finishing. The very tall oak trees were cut in the middle of winter 1518-19 and the construction probably undertaken in 1522. The structure is composed of a solid primary and secondary frame in a style known as 'rafter bearing'. The identical rafter sections measure 11.8m long. At the corners they radiate with monstrous precision. Two lines of sub-ridges filled in with St Andrew's crosses make a crossbracing against windshear along the whole length of the roof. Elegantly shaped king-posts (the central verticals) and beams were also originally adorned with coats of arms at their junctions. 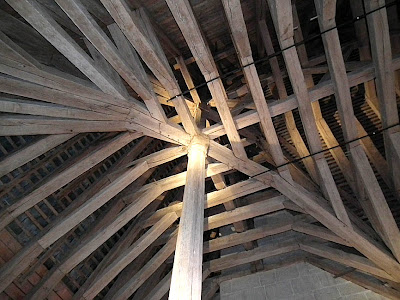 Doesn't the chateau at Usse (also known as the Sleeping Beauty castle) also have a window into the attic? I recall that it is full of 'treaures'.

Susan - the wordwork structure is art in itself.

Those beams are amazing. What a wonderful space.