I mentioned the other day that we are buying a granite worktop for the kitchen. This is coming from Plan de Travail Direct, a company I found during an online search when I was unhappy about the "service" we were getting from certain kitchen shops. This company appears to be the supplier that the kitchen shops use, but a lot cheaper if you buy direct rather than via a third party. One thing I liked about their site is that you can get an online devis (estimate) for your worktops.

When we were about to leave for Paris in June it suddenly occurred to me that this company was based "in Paris". At first I feared that this meant "from here on a clear day you can see Paris" or even "on the same planet as Paris", but what they actually meant was "IN Paris". I noted the address, and as soon as we arrived in Paris and dropped our bags off at the hotel we hotfooted it across town to the showroom. There we found them to be friendly and helpful, the ordering process was explained, and a devis done that corresponded with what I had calculated for myself.

The granite in situ (from the
Plan de Travail Direct website) 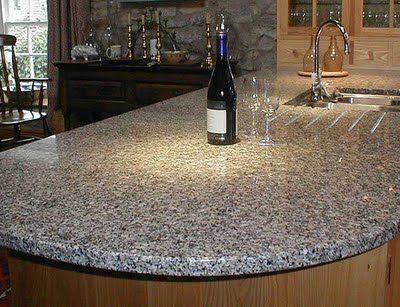 The granite we chose is a building quality granite that comes from a town in Portugal called Pedras Salgadas, with which it shares a name. It's a bluey/grey fleck, and we like the fact that it is quite local, and isn't from a warzone or country with dubious human rights/work practices.

A couple of weeks ago we contacted the company to say that we had installed the kitchen units, and a few days later a team arrived from Portugal to measure the kitchen for the worktops. This had to wait until after we had installed the basic units so the measurements could be absolutely precise. We were impressed by how professional and quick they were - they had obviously done this kind of thing before. There was no head scratching or rummaging for tools, which is always a good sign. 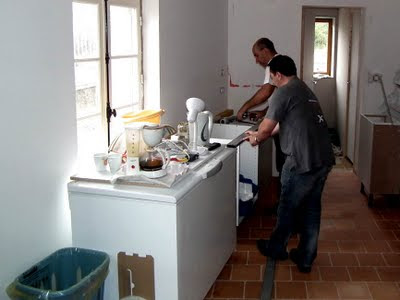 We now have to wait until the factory is back from their August holidays before the granite can be cut, delivered and installed, but September is only 4 weeks away...

Worth every penny. We just put it in here and love it. We tried to get granite for a good price when we lived in Cognac and gave up in the end. I've just sent your information to a guy in Cognac who lusts after granite so thanks for the information.

Sounds fantastic - can't believe the work you guys have done since we last said hello.
Leon

Just be careful not to drop breakables on it!

Beats the heck out of onyx melamine! It looks stunning.

Your granite looks a bit like mine, and its name is "Azul". Hard to tell from a picture but maybe it is the same. It looks like your hardest project is almost finished.

Craig - the second showroom isn't far from Cognac either.

Leon - we're getting a move on with it now - momentum has taken over.

Autolycus: not for the next 20 years, anyway. After that, no promises!

PG - and not a lot more expensive if you choose a less fashinable finish.

Nadege - Someone else has as much taste as me?