Yesterday we attended a simple ceremony to inter the ashes of our friend Jean-Pierre Lartigau in the cemetery at Preuilly. Only last year at Simon's birthday party he was hale and hearty and enjoying retirement. Sadly, just after Christmas, having had several years of remission, cancer returned. The cremation had been performed the day before in Paris, where he lived and was attended by many of his friends from his days as the Director of the Parc Floral de Paris.

Jean-Pierre grew up in Preuilly and his 91 year old mother lives just up the street from us. His two sons came down to preside over the interment and to support their grandmother. Jean-Pierre was an only child and it was very sad to see Madame Lartigau. Anne, his widow, was just too exhausted to make the trip, after many nights of very little sleep at the end. 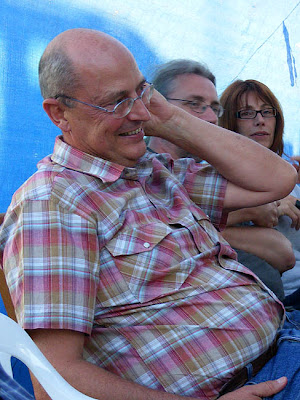 He was always so kind and generous with his time and expertise. When my parents visited in May 2008, he volunteered to give them a personal guided tour around the Parc Floral. I wrote a long post about the visit and J-P here. He was restoring his family home in Preuilly and so we would see him and Anne from time to time when they visited. Last year I decided to create a fernery in the apéro terrace. J-P loved ferns, and on hearing my plan, contacted a specialist nursery and presented me with a dozen or more little ferns for the new garden. Now whenever I water them I will think of him.

Plants and gardens were clearly his passion, and if you were interested in these subjects he was eager to help you pursue your interest in any way he could. His knowledge and network of contacts were extensive, and although he struggled with my poor French, he always endeavoured to answer my questions. Apart from the Parc Floral, he was particularly involved with the Conservatoire des Collections Végétales Specialisées (the equivalent of the British National Council for the Conservation of Plants and Gardens).

We will miss him, and our hearts go out to Madame Lartigau, Anne, Marc and Frédéric, and to Dylan, who won't understand why J-P isn't around any more to take him for walks in the forest.

We would also like to extend our sympathy to Bertrand and his family. Bertrand's father, who had the same name as my own father, was buried yesterday too.

Jean-Pierre's death seems monstrously unfair given his energy and generosity of spirit.

We are grateful to have an iris in our garden which he gave to Jill. sitting on our bookshelves is also an authoritative encyclopedia of trees which he gave us. He claimed his limited English meant that he could not really benefit from it.

We are grateful for these tangible mementos, but I shall try to hold on to the more precious image of him striding up to the Carroir accompanied by Dylan.

I am so sorry! I visited the "Floralies" only once. It was just beautiful.
Jean-Pierre had been loved by many and his kindness and generosity will never die.

Susan,
This is a beautiful and personal tribute to your friend.

John: My particular image is of him leaping out of the car to exchange bises if he spotted me gardening in the front courtyard.

Nadège: The Parc Floral is a wonderful garden at whatever level you want to enjoy it. A shame it isn't more widely known.

Gaynor: Thanks, but I felt it was quite a clumsy effort that didn't do J-P justice.

Susan, we were so sorry to read your tribute to J-P. From yours and others comments he was obviously a much loved, respected and generous man who touched the hearts of those he met. What more fitting legacy can there be than that?

Thank you for what you said about Jean-Pierre, my beloved one.
I couldn't have written nicer things.
Anne

Anne: thank you. Take care of yourself now, won't you.