This year has been a disaster for most of the Lycaenidae (Blue) butterflies here. Numbers remained low throughout the exceptionally dry spring and even with our relatively wet summer numbers have stayed low. One of the few blue butterflies which appears to have done reasonably well (although never common, even in good years) is the Large Blue Maculinea arion* (l'Azuré du serpolet in French).

The big blues Maculinea spp have a very particular lifecycle and ecology. Females lay eggs on the flower buds of the caterpillar host plant. Once hatched the caterpillar consumes the buds, hidden amongst the flowers for 3 or 4 weeks. Then, while still very small, it descends to the ground and waits to be adopted by an ant Myrmica spp. Once a suitable 'nanny' arrives the ant and caterpillar engage in a ritual which establishes their bond and the ant carries the little caterpillar off to its nest. The young caterpillar completely transforms the operation of the ant nest. Some Maculinea, the Large Blue included, devour the surrounding ant larvae, others just feed on the liquid the ant workers produce for their own larvae. 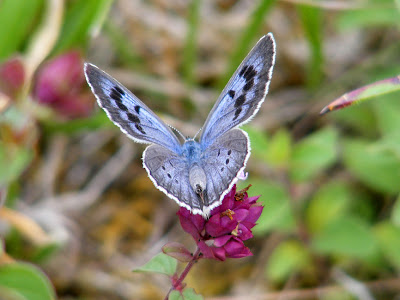 The caterpillar overwinters in the ant nest, going dormant in time for the ants to resume their normal activity and ensuring the colony will survive until spring. Still underground in the ant nest the caterpillar transforms into a chrysalis in the spring. After it has hatched the adult butterfly must leave the ant nest rapidly, to fly free and ensure the reproduction of its species.

This extraordinary lifecycle explains the extreme vulnerability of Maculinea populations. Their existance depends on a single plant within an area (very rarely will there be two host species on a single site) and a single species of ant which is essential for the growth of the caterpillars. The host plant must be at the beginning of its flowering season and not grazed or mowed during the egglaying period and the density of the ant nests must be such that the ants and the caterpillars have a good chance of meeting. And these plants and ants have their own ecological requirements. 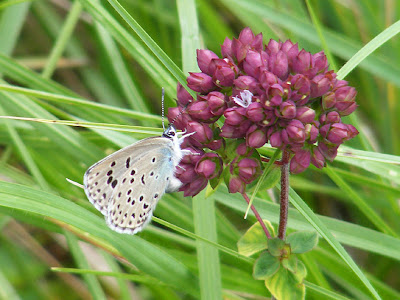 Following a series of local extinctions, naturalists have brought to public attention the strong regression of Maculinea in Europe over the course of the last decades. British readers will no doubt be familiar with the extinction and reintroduction of the Large Blue there. Hopefully this flagship group of butterflies has been instrumental in influencing policy so that management systems that are sympathetic to insect lifecycles and ecology are more widely practiced. If not, the continued survival of these remarkable creatures cannot be guaranteed.

Hi Susan,
Do all these beautiful creatures know you're a taxonomist and come to Sud Touraine for you to photograph them and tell their names and traits of their intimate life to the whole world?

WV is brant. I didn't make that up!

CHM: It's more the other way around - I came here because of them :-) The high biodiversity of this area is one of its best kept secrets.

How utterly fascinating. I am
trying to picture a mature
butterfly emerging from an
ant hill. That would be some
photo!

Sheila: I've seen video footage, but can't find it online. They have to be quick because once hatched they no longer emit the pheromones that fool the ant into thinking it is one of them. They crawl out without pumping fluid into their wing veins, so they stay rolled up until they are out in broad daylight.

I saw a report a couple of days ago which said Texas and Ohio have now 'enjoyed' 47 consecutive days of over 100ºF, trouncing the previous record of 27 days. And we were worried about a canicule here!