Our friends Chris and Annie were recently given the remains of a feral honey bee nest that had been cut down from a bush in their neighbour's yard. Annie installed it in her studio and was intending to paint it, but hadn't realised that something still lived in it. To her dismay the walls and furniture where covered in dozens of grubs within hours of it coming inside. Chris had to very swiftly encase it in a bin bag and deposit it outside, whereupon the grubs chewed through the bottom of the bag and 'legged' it. I was sorry to have missed the little blighters so I could identify them, but I suspect they were some sort of kleptoparasite, living off the bees' waste material, or the poor abandoned bee larvae themselves. 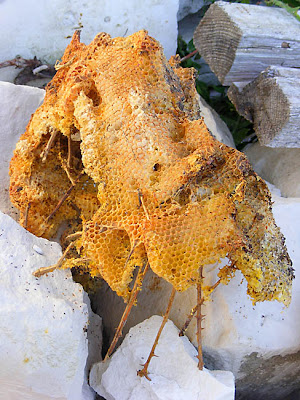 I imagine that many people think of Honey Bees as wild creatures, but Apis mellifera, or Hive Bees, as some scientists and apiarists prefer to call them, are a domestic animal, having been farmed and breed by man to provide honey for centuries. They are also used by commercial orchards as pollinators, but since many wild insects perform this task effectively, Honey Bees real economic importance is as honey producers.

Here in central France there are many apiarists and groups of Honey Bees inevitably go feral from time to time. It is quite common to see Honey Bees congregating around hollow trees or delapidated chimneys. They've escaped the management of the apiarist and are living in the wild. If you have them nesting somewhere problematic, contact a local apiarist and he or she will most likely be very happy to come and return them to the fold. Luckily feral Honey Bees don't cause the sorts of environmental problems that feral cats or goats do.

A Honey Bee, working over a thistle yesterday. 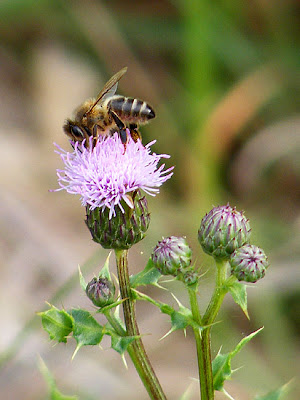 In Europe and America there is great concern over largescale Honey Bee deaths in the past few years. Apiarists are worried that their livelihoods are seriously threatened and the press are only too happy to sensationalise. Einstein's supposed quote about us only having 4 years if the bees go is regularly trotted out.

The reality seems to be that, globally, Honey Bee numbers are increasing, mainly thanks to the Chinese taking up industrial scale honey production. Only 6% of food crops require the input of Honey Bees to provide a pollination service. Cereal crops, for instance, are wind pollinated. The latest research shows that the causes of Sudden Colony Collapse Disorder are a combination of a hive already infected with both Nosema (a fungus) and iridovirus, triggered by some additional adverse weather stress.

Our real worry should be the thousands of wild bee, fly and moth species which perform the bulk of insect pollination and which appear to be genuinely suffering major declines in numbers worldwide. Neither should we forget the welfare of domestic bees, when apiarists are not always given helpful advice or support

Email ThisBlogThis!Share to TwitterShare to FacebookShare to Pinterest
Labels: Insects

I read an article recently in the LA Times that there is a particular chemical used in Northern America that is really bad for bees. France and Italy have banned that chemical just recently and bees are now doing
better in those 2 countries.

What I find very disturbing is
the commercialization of honey
bees by people who transport
their hives via huge trucks all
over the US following the
seasons. It supposedly is to
aid in pollinization, but they
reap the benefits by harvesting
honey on a massive scale.
Might very well be contributing
to the spread of disease.

I would love to have seen
Annie's painting of the hive.
Her talent, as seen in your
past post, is enviable.

Nadege: The article you link to is 18 months old. It looked like pesticides were going to be a significant part of the CCD problem, but subsequent research, published early this year, has shown the only commonality between CCD outbreaks is the presence of both nosema fungal infection and iridovirus. No one is saying pesticides are not an issue, but they appear not to be the villain in CCD. I'm guessing the pesticides you are refering to are neonicotinoids, which have been banned in France for nearly 20 years. Part of the problem with the pesticide issue is that as yet no unimpeachably independent study has been done of the effect of modern pesticides on bee well being. There's a lot of opinion and not much empirical evidence floating about.

Sheila: Many domestic animals are trucked up and down the country in a similar way. Sheep and cattle are normally bred by one farmer, then trucked to another for 'finishing'. There can be a link to this practice to outbreaks of disease e.g. foot and mouth in the UK a few years ago. Many people believed this practice was going to emerge as a contributing factor in CCD, but it has not proved to be. Beekeepers provide a service to orchardists and make their money selling the honey. I don't think there is anything inherently bad about that. Problems with this sort of system tend to develop only when the scale of the operation becomes very great, as it is in the US, but not here in France.

Susan, I couldn't find the LA Times article but it was very recent, 1 month or maybe 2 month ago. I only had time to find the one from "Science news". Maybe you are right, they still don't know what the problem is but chemicals might be one of the suspect.

Nadège: I think you probably read an article about Jeff Pettis' latest paper, which links interaction between the neonicotinoid imidacloprid and nosema fungal infection to significant weakening of honey bee colonies. This synergistic effect has been known for a number of years, but Pettis demonstrated for the first time just how tiny a dose of imidacloprid could cause the phenomenon.