The Mushroom Caves at Bourré

In the 15th and 16th century the high quality of the stone quarried at Bourré meant that it was used in the construction of great châteaux like Cheverny, Chinon and Chambord. By the 19th century there was a network of hundreds of kilometres of galleries, on multiple levels. The owner of one of the principal quarries started growing button mushrooms in worked out galleries as a sideline, and his family still own and operate the Cave des Roches. No more quarrying goes on and very little button mushroom cultivation. Once there were hundreds of caves in France producing mushrooms - now there are just 30.

In the 1990s new accelerated growing methods for button mushrooms were developed and many tonnes began coming out of Dutch greenhouses. The Delalande family at Bourré couldn't compete, so they decided to switch their production to more unusual gourmet varieties of mushrooms. Today they grow pied bleu, shitake, chestnut and grey and yellow oyster mushrooms which are sold to Michelin star restaurants all over the world. They also open the caves up to visitors.


Crates of mushrooms growing in the cave. 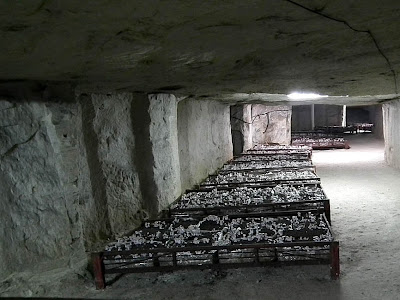 In the 1930s the Cave des Roches was producing 200 tonnes of mushrooms a month and employed 50 people. Now they employ just 6 and produce 100+ tonnes a year, all harvested by hand. The caves provide the ideal atmosphere for mushrooms. Initially the inocculated growing media are kept warm in incubation units until a sufficiently robust network of mycelia (like roots) has developed. They are kept damp and then they are taken out to the cooler environment of the caves. This combination of warmth and water followed by a cold shock triggers fullscale growth of the fruiting bodies, which are the bit we eat. While growing they remain at a steady 12°C and are naturally ventilated by the chimneys which provided air for the original miners. Moisture levels in the air are very high.

Each of the varieties grown requires a slightly different approach. The costs of production vary from about €5 per kilo to €10 per kilo, but add the cost of transport, storage, packaging, retailer's margin and so on, and the price trebles or even more. The mushrooms become very expensive, which is why you don't see them in the supermarket. They are allowed to grow at a slow natural pace, resulting in a highly flavoursome, firm textured product (unlike the mass produced supermarket button mushrooms).

The pied bleu ('blue foot' or Wood Blewit Clitocybe nuda) is native to this area and can be found wild in the forest. However, grown in the caves they remain white and do not develop the violet colour, which is apparently a reaction to warm days. They also remain unmolested by fly larvae and slugs. Chefs love them because they retain a firm, almost crunchy texture when cooked, and will keep up to 10 days in the fridge in good condition. 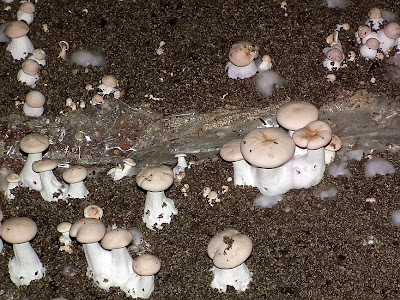 I've eaten them twice, and they are distinctive, particularly because of the way they retain their shape and the mouth feel. The first time I had them I cooked them myself after purchasing some fresh ones at the Cave des Roches. Later that evening I developed a headache and took a paracetamol/codeine tablet. Not long after I began to feel odd and thought I was going to pass out. My guess is that the mushrooms and the codeine had a disagreement. Combining alcohol and mushrooms quite commonly causes a reaction in people, and it seems likely that the same applies to codeine. I've since had them at the nice new restaurant in Montrichard, La Villa (where our friend Laurence works). They came with an excellent piece of steak, some Sainte Maure de Touraine goat cheese sauce and a glass of wine and I had no reaction whatsoever (except 'yum!'). 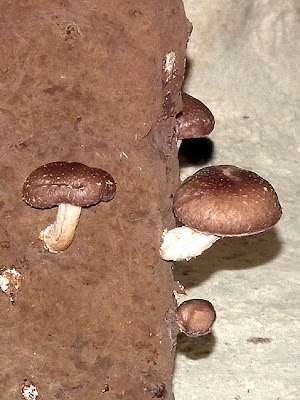 The shitakes are grown in blocks of compressed sawdust. French chefs don't do much oriental style cooking so many of the shitake are actually produced for cosmetics and pharmaceutical companies. 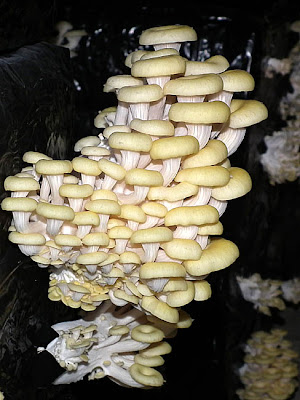 Like the pieds bleus, the grey oyster mushrooms (pleurotes grises) can be found wild here. They are not a great favourite with chefs because they go soggy very easily. Consequently, the Cave des Roches also grows yellow oyster mushrooms (pleurotes jaunes) an oriental species. These are fragile too, only keeping for 2-3 days in the fridge, but if they are cooked very briefly they retain their firmness. The oyster mushrooms are grown in bales of organic straw covered in plastic. It is vital that the straw has not been treated with fungicides, pesticides or herbicides or the mushroom spores will be killed. The bales are inocculated and the mushrooms emerge like bunches of flowers through the inocculation holes. Once a 'bouquet' is ready it is picked and shortly after a new one will emerge. 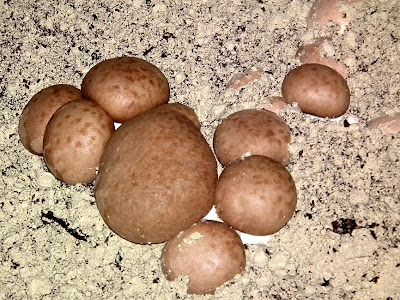 A few chestnut mushrooms are also grown, in plastic bags of pasturised horse manure set into metal crates. These are not so popular with the great chefs as they are now a bit run of the mill, not exotic enough, but they appreciate the quality of these traditionally raised mushrooms and so it is worth it for the Cave des Roches to continue growing a small quantity.