Our friends Chris and Annie, like almost all our friends, are in the process of doing up a dilapidated old French house. I took the opportunity to take a few photos of a couple of their intriguing and interesting architectural features. 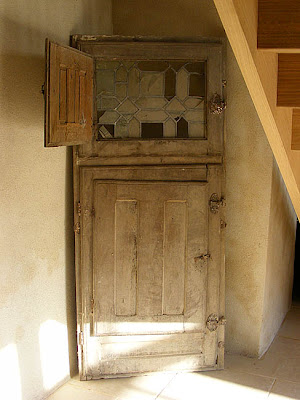 Like us they have had the impetus this year of family visiting to cause a big push. The house has come on amazingly since we last saw it. We are tremendously impressed with all the beautiful detail they are adding. They've had the fun of commissioning a staircase, choosing colours, designing a stylish new bathroom just like we have. It's always fascinating to see how other people approach these projects, and as usual I came away impressed by how beautifully some people can arrange a room or choose objects. I'm always too conscious that decorative objects need dusting, and since I don't dust, I tend to avoid ornament.

But it was some of the old detail that really caught my attention. The shutter and leaded window unit which they think must have come from the back of the house is like a scaled down version of those at the château d'Azay-le-Rideau. They are beautiful, complicated things, multi-layered so you can open all or part. I suppose they are 19th century copies of a 15th century style, but I'm not really sure. 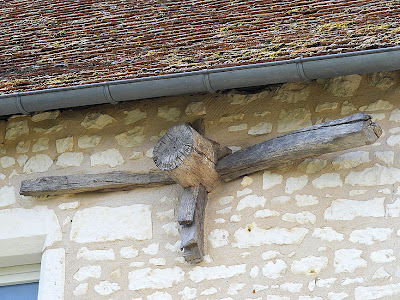 At the front of the house is an extraordinary 'Heath Robinson' affair which we presume is some sort of tie to stop the walls spreading.

Now that the house has some more or less finished rooms, Annie is starting to put some time into the garden. She is a botanical artist, so the long border has a series of plants that will make good subjects - sugarcane, castor oil plant, crimson artichoke and other unusual specimens. 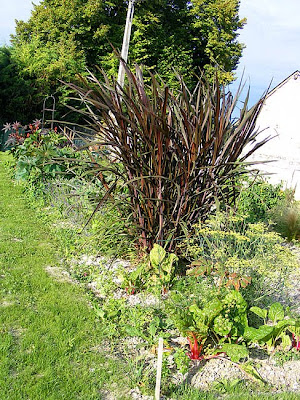 Chris is a great cook and thanks to them we have matching Italian range cookers. He has been using his for a bit longer than me and is now tackling the grill. Apparently it is ferocious, but his grilled mozzarella on baguette with lardons was delish. I haven't attempted anything under the grill with ours although I have successfully used the oven several times.

When we left Annie gave us a jar of homemade Cornelian Cherry jam. They have a tree at the front of their yard which produced hundreds of shiny oval red fruits in July. Their neighbour told them the fruit made excellent jam, so they tried it. It's a sharp sweet flavour that went very well with the lime sorbet they served at dinner.

Cornelian Cherry Cornus mas (Cornouiller mâle in French) is a type of dogwood native to central Europe. It forms a small tree, growing on chalky soil, with yellow flowers appearing before the leaves in February or March. Not to be confused with the dogwood native to this area, C. sanguinea, which is a shrub with reddish stems and white flowers in early summer followed by black berries. It seeds and suckers along all the roadsides, hedgerows and fencelines, becoming a bit of a nuisance for gardeners.

Email ThisBlogThis!Share to TwitterShare to FacebookShare to Pinterest
Labels: Food and Drink, Gardens and Parks

Hi Susan,
What you say about Cornouiller mâle [Cornus mas] is very interesting. I wonder if the fruit of the American Dogwood [Cornus florida] is also edible in the form of jam. The latter, like Cornus mas, blooms in March or April and the flowers appear before the leaves. I don't know when the shiny oval orange fruits mature. In Fall, most of the foliage turns bright red.

Interesting post Susan. glad you enjoyed your time away from 'base camp'. Actually with the progress you have madee on your lovely house you are way ahead of base camp!!