Preuilly's big annual brocante (jumble sale) was yesterday. Every French village organises an annual brocante, which is a mixture of professional dealers and local people emptying the contents of their attics and garages. 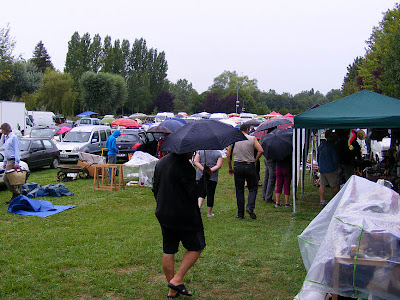 Unsurprisingly, in the light of yesterday's deluge in Paris (seen here on Frogsmoke) and with the weather coming in threateningly from the east the night before, the brocante started off badly. It rained heavily enough for stallholders to have to cover their goods, which is hopeless for making sales. 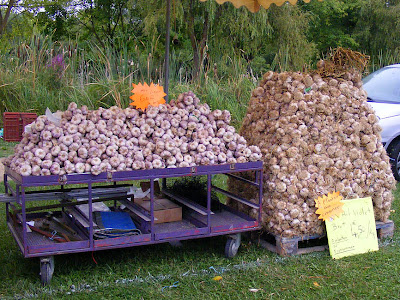 The extra pressure of brocanteurs and holiday makers on the traffic caused the biggest bouchon I have ever seen in Preuilly. The whole of la Grande Rue and rue du Chaumont-Patin was gridlocked. It seemed to just be a result of the quantity of vehicles trying to get through a section of the village which is effectively only one lane wide. Tout le monde was sitting going nowhere, including a transporter with a broken down ute from the Parc Régional de la Brenne and a rather natty vintage bike and sidecar. There was lots of sighing and drumming of fingers but no hooting or shouting. Eventually, I don't know how or why, a few cars moved off, then a few more, and in minutes it was all over. 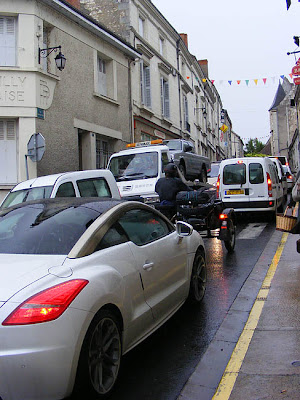 And by lunchtime the sky was clearing, so I hoped the afternoon would go more pleasantly for the brocante vendors, but it was not to be. It rained lightly most of the afternoon. Personally, I was very happy to get a bit more rain.

What a shame. If only we could arrange for it to rain overnight and have sunshine during the day then that would be perfect!

Oh what a pity! After all the dry weather we've had, too! We've been praying for rain but when it caught us out on Super U car park we were not amused!!!

Just looooove that Peugeot sports model in the lats pic.

A real shame. We were going to come in the afternoon after a morning at Loches market but with the rain we gave up on the idea.

Leon: I knew someone would comment on the car in the foreground :-)