The rooster as a symbol of France is well known, but recently at the Café Franco-Anglais we had a discussion as to why, and I thought it was worth doing a bit more research and reporting on the blog - especially as we have recently been given the ideal thing to illustrate such a post with.

Eggcups, purchased at the Assemblée Française
gift shop by friends from Sheffield (not London). 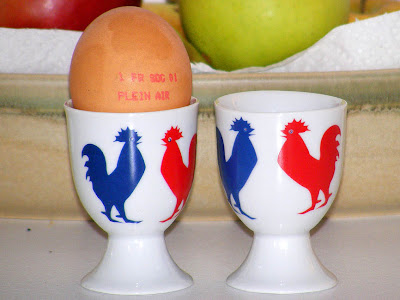 Le coq gaulois is a play on words, as gallus is the Latin for rooster. The association between the rooster and the Gauls began, as so many of these things do, as an insult, swiftly adopted by the recipients and turned around to express power and pride. Just at the time the Catholic Church was fighting for survival against the wave of Protestantism during the Renaissance, the coq began to be deliberately promoted by the Catholic French kings as an expression of renewed and strengthened faith because of its association with Saint Peter. This is why it is always depicted crowing. Le coq gaulois symbolises the resurrection and Christian readiness for the second coming, and is seen on every church in the land, usually as a zinc weather vane.

The symbol survived the Revolution because of its (purely imaginary) association with the ancient Gauls, and today is more often encountered than Marianne, the official symbol of France born from the blood and ideals of that Revolution. These days as well as on top of every church you will see the coq at national sporting events and at the movies. It is the most recognisable symbol of French national pride both within and outside of France.