This weekend the Comice Rural is being held in Preuilly sur Claise.

Yesterday's main event was the concours de labours (a ploughing competition) and an open air cinema at the chateau at Boussay.

Judging the work of the Rotovators 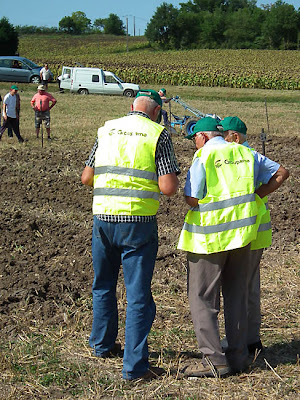 Today there are plenty of events: an exhibition of animals, local businesses on display, an organic food market and a sideshow alley. Later in the day there will be various races (foot races this time, I don't think there will be any cycling), and at 23.00 fireworks and a bal populaire.

Tomorrow there is a grand parade at 14h with lots of folkloric stuff from around the country and "la Reine du Commerce et ses Dauphines" - The Show Queen and Princesses.


We went to the ploughing competition yesterday, which was interesting, but very hot and humid. As with most of these things the details are a mystery to us, but we know people are judged on straightness and evenness of depth of the furrows. What else constitutes a winning run is beyond us. By the time we arrived the hand ploughing (roto-tilling) competition had finished and the competitors were rehydrating in the beer tent, whilst the Tractors Ancient and Modern were still working.

Not all of the tractors were in competition.. 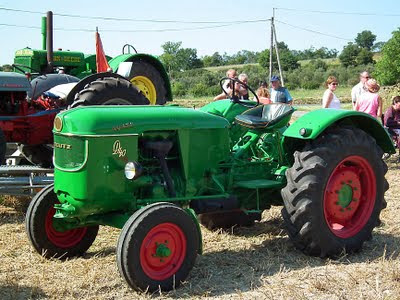 ..unless there was a beauty parade as well 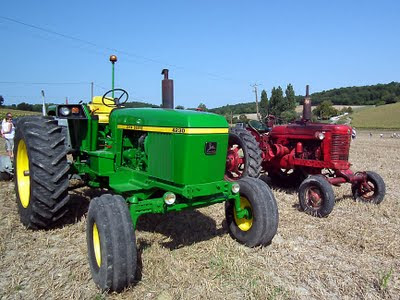 Today and tomorrow we are promised temperatures in the mid-30s, which is a startling change from the wet grey and miserable weather of only a week ago.

Simon, red tractors, green tractors - let me show you some real cars tomorrow - be sure to tune in on Monday's blog - it will appeal to you.
BTW how is your lovely Celestine doing. Are you treating her well?