When we had a client in July who only wanted to see gardens, we got in touch with some of the gardens to try to set up meetings with the gardeners. At Villandry they went one better for us, and Henri Carvallo, the owner, very kindly gave us half an hour of his time. He was lanky, diffident and clearly very conscious that it is the visitors that matter at Villandry.

Sue and I talking to Henri Carvallo. 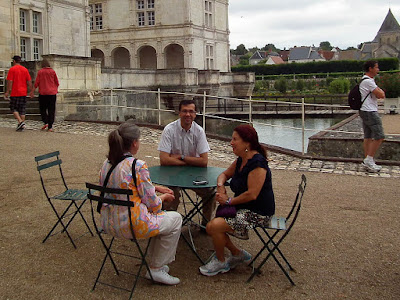 He told us that at Villandry the entry fee covers the work in the garden and that the place does not get any sort of government grant. I know from my time working at the National Trust in England, Wales and Northern Ireland that this is extremely rare. It is very difficult to set an entry price that the visitors are willing to pay that actually covers the wear and tear on the site as well as regular maintenance and improvements. This is a real testament to Monsieur Carvallo's experience and skill as the owner and manager of the site.

The garden is now fully organic and employs 9 full time gardeners and some apprentices. Some of the plants, such as the step-over apples that 'fence' off the potager plots, are not grown on site, but supplied, already trained, by specialist nurseries in Germany. Monsieur Carvallo's attitude is that they can't be expert at everything at Villandry, and these types of plants are best produced by really skilled hands that do it every day. Other plants come from the big French nursery Delbard. 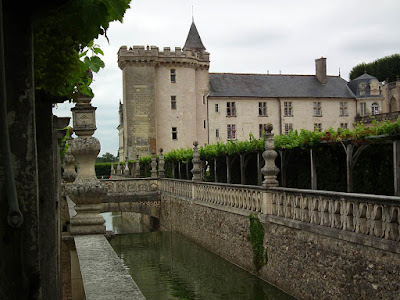 He has recently been appointed to an advisory board for Longwood in Pennsylvania. No doubt they will benefit greatly from his input, and he confided to us that he wanted to pick up a few tips on customer service. There doesn't seem to be anything much wrong with the visitor service at Villandry, but Monsieur Carvallo believes that America leads the way in this field and that he can gain valuable insights now that he will be regularly working with a major American garden.

My favourite bit of the garden, with purple lavender and perovskia
bursting out of the box hedges. I wonder if the colours are
significant, given the white stone fountains? 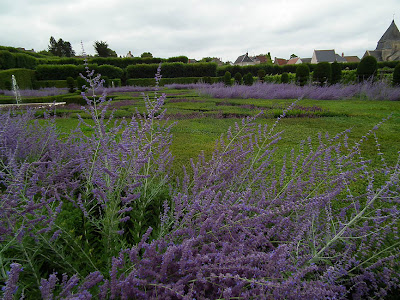 Monsieur Carvallo told us a little of the history of Villandry and how his family came to acquire it. I knew his grandfather* was a Spanish medical research scientist, but I hadn't realised his grandmother* was an American coal heiress from Pennsylvania and also a doctor. Apparently at the outbreak of the Second World War she ran the Stars and Stripes up the flagpole, because she thought the Germans would leave them and the garden alone if she clearly identified with the US (which was neutral until later in the war).

*Monsieur Carvallo referred to his 'grandparents' but many websites say 'great-parents'.

What a wonderful opportunity to be able to discuss the gardens with Monsieur Carvallo. I'm sure your client was delighted, and it will have made the experience even more memorable for her