Quite a few people around Preuilly have a little truffle oak plantation. They buy oak saplings which have been inoculated with the truffle spores and associated mychorrhizae, wait a few years, and then harvest the truffles for the next 30 years or so.

One such plantation we have visited has a mixture of evergreen non-native oaks and deciduous native oaks. The owner feels that mixing the trees up means you create a habitat mosaic which benefits both types of tree and their symbiotic relationship with both truffle and soil micro-organisms. He also has both species because the evergreen oaks need fewer years to start producing truffles than the native ones. 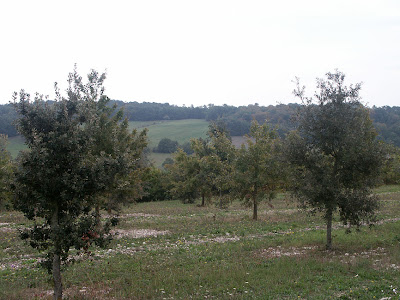 Some of the trees have orange markers, and he explained that once a tree has produced a truffle, it gets an ID number and records are kept of how many truffles of what weight were produced in which year.

He only grows black truffles, Tuber melanosporum, which are harvested in the winter, and can be bought at fairs like the one at Marigny-Marmande. He says a few people in the area grow the white Italian or estivale (summertime) truffles - someone over near La Roche-Posay and a couple near Loches, but usually it's black truffles in the Touraine.

Are those truffle oak trees found only in Europe? Do they need a special soil for the truffles to grow?