Yesterday was Armistice Day: 91 years from the signing of the Treaty of Versailles which ended the First Wold War on 11 November 1918. In France the day is known as Armistice 1918, and is a public holiday.

This is the first time we have been in France on Armistice Day, and although we hadn't seen any notices about a ceremony, we assumed there must be one. We went to the Mairie at 10.30, and Susan's intuition paid off - the ceremony was just getting underway. We had just enough time to donate some coins to the Veterans Association - for which in return we received little sticky lapel badge - and the first drum-roll and fanfare of the day started. This was followed by the Marseillaise, and then all those in attendance marched behind the flags to the War Memorial.

Marching to the War Memorial: the flags followed by
Preuilly's Gendarmes, the Pompiers, and the Jeunes
Sapeurs Pompiers 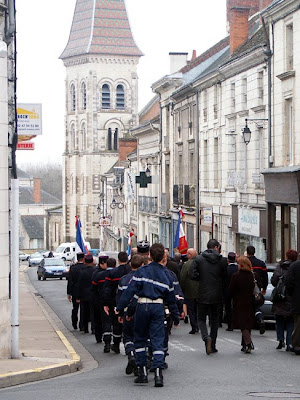 At the War Memorial the ceremony would have been fairly familiar to anyone who had attended a similar service in any country - a speech about peace in Europe, the laying of wreaths and the lowering of flags. What we hadn't seen before was the lighting of candles and the placing of them on the memorial by the children of the town.

Lit candles on the War Memorial 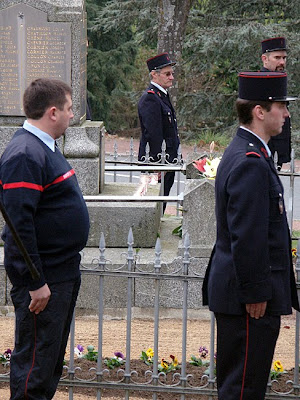 From the War Memorial we all marched back through town to the cemetery. Preuilly-sur-Claise's cemetery doubles as a military cemetery. There, more candles were lit, but this time placed on the graves of the First World War dead. 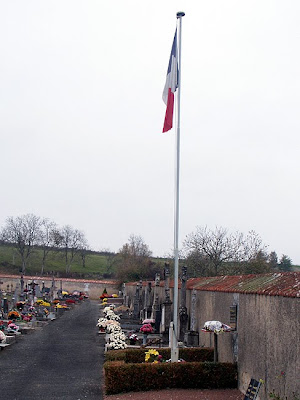 After the cemetery, the procession went back to the Mairie. A final Marseillaise, and the invitation was issued to all citizens of Preuilly to join the Maire for an apéro. Susan and I missed the drinks, as we had Alex working on the garden.