I know - it sounds like a French take on Indian cuisine, but you couldn't be more wrong!

Because our back garden is so small we decided that we didn't want to divide it up any more than was necessary. This meant that we either had to have a totally gravel garden (very 80's, but bleugh), or fully grassed. The latter option was voted on as better, but it left us with a problem as far as getting Célestine into the garage. It was then I remembered the concrete stuff with a grid in it for lawn that they use in public carparks, and the plastic stuff that lawn grows through that lets you drive on a lawn without crushing it and making wheel ruts.

It was then I encountered a snag: searching for "you know - that plastic stuff you can drive on that lets the lawn grow" on Google didn't help much, and until I knew the English word for it there was no way I could work out the French! Fate (or something) stepped in and by a process now forgotten but which probably involved typing "pelouse" (lawn) into Google picture search and spending an evening clicking on stuff I discovered the magic word: Dalle (or Dalles) Gazon: lawn tiles. A couple of days later we were in Chatellerault and would you believe it - a stack of plastic things with holes in the for the grass to grow through that I could point at and say " dalles gazon!!!!", thus impressing every French person in the store. 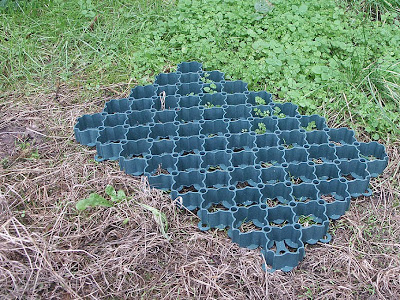 Once we were ready to start work on the back garden we returned and bought a stack of dalles gazon and 6 metres of 4mm steel rod to cut into pins so we could anchor it down.

You can't just put these things on the ground and fill them up with dirt: they need to be on a firm base and anchored so that they don't shift around or sink as you drive on them. This involved driving to Yzeures with the trailer and buying a 1/2 tonne of gravier (little rounded river bed stones) as a bed to take the weight which Susan and I spread this on Tuesday afternoon. 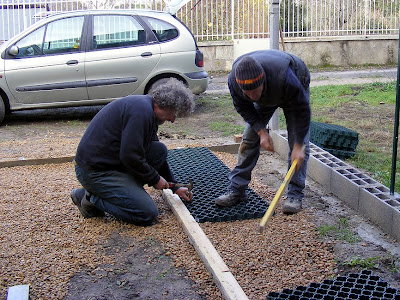 On Wednesday morning Alex arrived so we could start laying the dalles. This went really well except for the anchoring - even after sharpening a point onto the pins they required seriously intense bashing to get them into the ground - our garden substrate really is that hard. It took a couple of hours to lay the two lines of dalles from the gateway to the garage, but we are feeling encouraged by the way it feels underfoot. 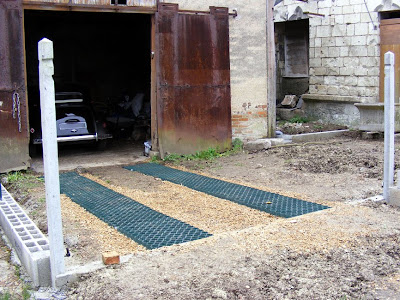 Of course, like most hard work things, when we are finished you won't be able to see how much work went into it, but neither should you see wheel ruts, potholes and mudholes.

And when you return from the odd wine tasting, you have a built in "runway" straight into the garage, even if it is covered with grass, I am sure it will work well.Bravo !

Great idea to keep some green happening and easy to mow. I've seen them here (OZ) made from concrete.
By the way, Celestine has an awfully nice touche' protruding from the garage. My traction (51)had the spare on the derriere....
Leon

Up in the medieval cité of Loches, a long path used by pedestrians and cars is "paved" with these things. They are great.

Leon. I was lookomh for a Maille Plat, but they seem rare. It's a prettier bum though!

Ken. I read that and asked Susan where you could be talking about - and then realised it's the long drive up to the donjon, yes?