After laying the dalles gazon, our next task was to hang the gates.

When we were putting the gateposts into the ground we spent a lot of time measuring, to make sure the gateposts were the right distance apart, and that the gates would be level once installed. Once we had decided on where the posts should go I measured again, and just for good measure (as it were) I measured again once the posts were in but before the cement had set.

I had to design and manufacture my own method of hanging the gates as the hinges supplied with the gate were the sort that are meant to be hammered into stone, not the sort that screw or bolt into cement. In the end we decided on the bottom hinge being a solid cast metal shutter pin screwed into the posts taking all the weight, and as all the top hinge has to do is hold the gate in place I would bolt a bent metal strip to the post and use the original gate fitting to locate a bolt into the gate.
A shutter (volet) pin put to different use 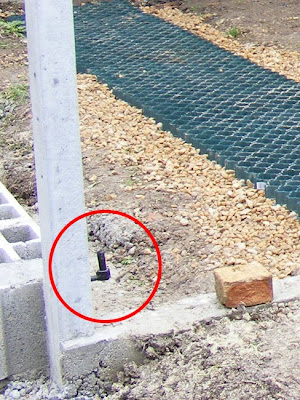 By the time we were ready to start, the weather had turned nasty and we were getting rained on. Even though this made precise work even more difficult, we managed to get all the parts level and even. This involved drilling a couple of new holes in the posts, but even this went surprisingly well (I don't really like using electrical power tools outside in the rain, but no way was I stopping work halfway through).

Boys and their toys: using the
electric destroyer in the rain 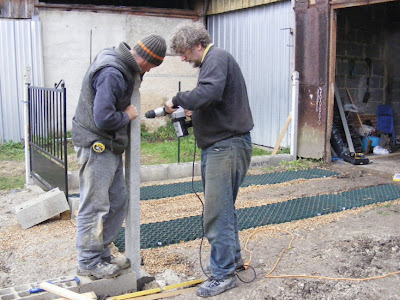 The custom gate fixing method went onto the posts easily enough, and even 2 days later appears to be really solid. The gates swing freely, but are so level that they don't swing open (or closed) under their own steam. This is a victory, and we were feeling well chuffed. 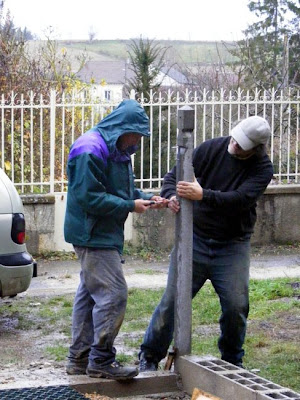 It was then we realised we had a problem. I had measured so precisely that the gates fitted perfectly - with only about 2mm between them. This was annoying as the handles and lock supplied require a 5mm gap. As there is nothing we can do to ease the gates apart we will have to work out our own method of locking the gates.

The gates in place. By this time
none of us were enjoying the rain. 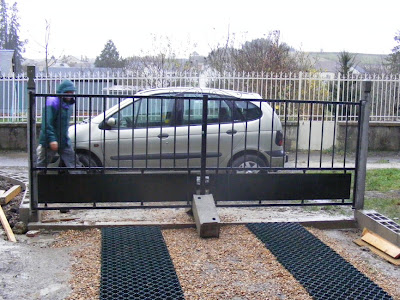 The garden is slowly coming together. All(!!) we have to do now is move lumps of soil all over the place, spread a couple of trailerloads of topsoil, plant daffodils and grass seed in the lawn section, put the fence up and move the old concrete laundry tub back. That is next week's job.

i love the dalles gazon, congrats on your persistance in locating them in french in france. does topsoil now go over them and the gravel strips between them, for grass?
the gates also look fantastic, even if they don't exactly...lock, is it?

PJ. The whole lot will get 2 inches of topsoil and be seeded for lawn. Hopefully the Dalles will be invisible.

Not just locking - keeping them shut has required some improvisation too