On 20 November I planted about 90 strawberry plants in the potager. Most of them were a gift from Nicole at Les Limornières and the rest I bought for about 13c a pied* from our orchard neighbour's market stall. 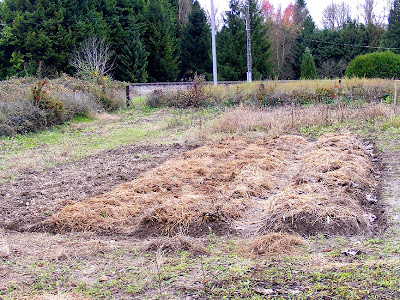 Simon can't understand why I planted so many and can't imagine what we will do with all the strawberries. He's also annoyed that I didn't discuss where I was going to plant them, as I have planted them in the wrong place, in a bed that was intended as part of our rotation system. They'll have to be moved in a couple of year's time anyway, when they need dividing.

I have no worries about using them. They'll freeze, and I remember one summer in the 1980s, housesitting for my parents in Australia and having to deal with mountains of strawberries. Homemade strawberry icecream is a very good thing in these situations. 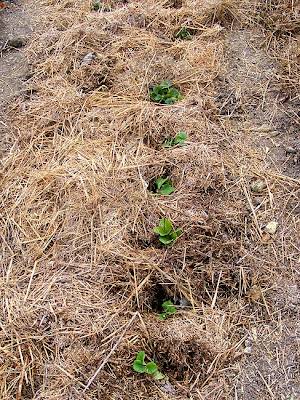 I've mulched them heavily with some of the 60 year old straw that came from our garage (ex-stable) loft. This level of mulch would harbour slugs in the summer, I am sure, but it will have rotted down a lot by then, and in the meantime, the little strawberry runners are snug and protected from the cold and can get on with establishing themselves before winter really sets in. We've mulched the newly planted onion and garlic similarly, in the rows alongside the strawberries, with the idea that the new growth will be protected from frost and they will get a head start in the spring.

I've also planted an autumn fruiting rasperry (Autumn Bliss), a tayberry (by far the best of the raspberry / blackberry hybrids) and a red currant (London Market). We bought these at Jardiland on the outskirts of Châtellerault. This was our first visit to a proper garden centre in France and I was impressed to find that they had tayberries, as they are not that common even in the UK where they were developed to take advantage of Scotland's relatively cool but long summer days.

*literally, 'foot', but the term is used to describe small plants for planting on.
Posted by Susan at 09:00

Susan, it sound like you are going to need to sell strawberries at the market next spring and summer!

Susan,
I enjoyed enjoyed your blog on strawberries and especially the little "points of view" between you and Simon. It sounds very Oztralian, or is it international.
My Susan and I often have differing "points of view", it makes life interesting.
And it makes good reading.
PS I looove strawberries.
Leon

Apple and strawberry crumble is one of my favourite puddings.

Next May or June you will feel rich.

Also strawberry sorbet is a good use.... also make some strawberry brandy [one very large Le Parfait jar; fill with strawberries; pour in cheap brandy -36%ABV is best, it doesn't destroy the fruit; immediately before Christmas carefully decant the liquor without disturbing any sediment; bottle the liquor; place the drained fruit and sediment in the fridge; serve up the fruit with ice cream; use the strawberry brandy as a digestif... or a winter treat. The strawberries can, alternatively, be left in the brandy until all used up; the remaining liquor left until all the sediment has settled and then decanted. Any sediment left works well in small amounts as an anti-freeze in making a sorbet allowing you to serve straight from the freezer]and then there is soft-set French style conserve to have with yoghurt or fromage fraise for breakfast....etc...etc

Perhaps some strawberry & garlic tonic made with eau de vie from your plums ? Bound to be healthy.

Ken: No, no, a pick-your-own scheme is much less work. I trust you will be here when the time comes?

Leon: not sure 'interesting' is the word I would use when there is a difference of opinion here.

Jean: I'll save some frozen apple and we'll see what we can do.

Carolyn: You sure? May/June next year is about when I am expecting to feel distinctly impecunious. Dwindling Funds Syndrome, as our building surveyor puts it.

Tim: Some good suggestions, although fruit in alcohol tends to just sit around in the pantry at our house. I suppose having it in the breakfast yoghurt is no different to popping in to my local bar for a snifter first thing, and you still see French people doing that. Since they are probably the ones who live to 105, I'll have to consider it.

Jocelyn: What? Must be healthy on the grounds that it sounds a perfectly awful combo? LOL.