Yesterday we had our second delivery of wood. Monsieur G. told us that he expected the first load (a half stère) to last 15 days, which it did. Yesterday's load was 2 stère - about 2 cubic metres - and instead of being delivered from the back of a car, was bought by tractor which only just made it up the driveway. 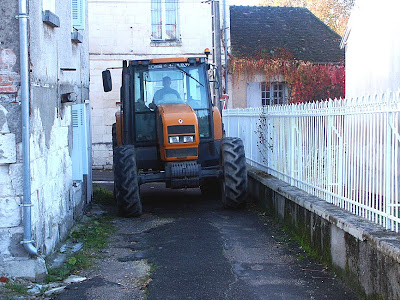 The wood was delievered in two loads, the first of which Susan and I managed to stack in the garage before the second arrived. Together they make quite an an impressive heap which should last us into the new year. 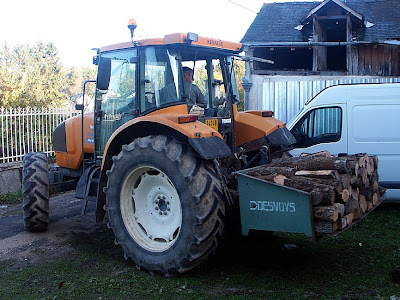 In the afternoon we took a drive into Descartes to collect Célestine's new number plates (plaque d'immatriculation). We had to have them custom made so we could have white numbers on a black background, instead of the standard black numbers on a white background with a lot of other information besides (see here). Modern plates would somehow have just looked wrong. Next step is to buy ourselves a vintage "F" plate - or at least a reproduction vintage one. 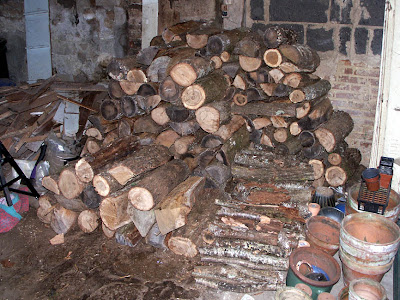 I also installed some shelves in an alcove in our salon which was previously a built in wardrobe. The new shelves are really solid, and capable of taking a great weight, which is just as well as I have put our stereo and the computer we use as a media centre in there.

You can tell it's winter - the work being done around the house is getting smaller and smaller. No major building projects get done in winter!

Lovely log pile. It gives a sense of comfort and reassurance just looking at it, not to mention the acheivement in stacking it. !!

Theres's something about a woodstack which gets to me... It must be a primal thing.

So Simon, who did call Mr G?
Has Susan got her voice back?

Beaver: I called Monsieur G - at least, I telephoned him and croaked at him.